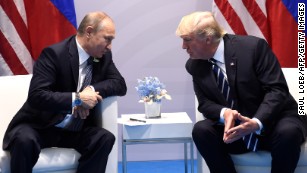 (CNN)President Donald Trump is back from a trip that highlighted his isolation abroad to confront political storms in Washington over Russia and Obamacare that have only grown more intense in his absence.
The President will be called upon to rescue a Republican push to repeal Obamacare that now appears to be in significant trouble, and he is facing increasing fallout from his meeting with Russian President Vladimir Putin, which offered new openings to his critics.

But even as the turmoil deepens around his White House intensifies, Trump will only be home for a few days.
The President heads back to Europe later in the week to be the guest of honor at France’s Bastille Day parade Friday on a trip that will paper over divisions between the White House and Western powers on display at the G20 summit. Trump was isolated on trade policy and was rebuked over his decision to pull the United States out of the Paris accord on combating climate change, although both positions were exactly in line with the promises he made to American voters that led to his victory in the 2016 presidential election.

Inside Trump’s Europe trip: The President settles into role of global agitator
Still, the visit will highlight Trump’s increasing ease on the international stage after a visit last week in which he argued that the trajectory of the West should be closer to his nationalistic, populist politics than the more liberal reflexes on immigration and the reach of government that are favored by US allies across the Atlantic.
The most significant moment of Trump’s journey to Germany and Poland, which ended when Air Force One touched down at Joint Base Andrews on Saturday night, was his long-awaited meeting with Putin.
Russia meeting revelations
The encounter was lent added significance by the special counsel probe into whether Trump’s campaign aides colluded with Moscow in election meddling. It came shortly before The New York Times reported that Trump’s oldest son, Donald Trump Jr., son-in-law Jared Kushner, and then-campaign chairman Paul Manafort met with a Russian lawyer last year — the first known meeting of several of the senior-most members of Trump’s team and a Russian national during the campaign.
The Times, which first reported on the previously undisclosed meeting, said Donald Trump Jr. was promised damaging information about Hillary Clinton before agreeing to meet with the Kremlin-connected lawyer during the 2016 campaign. The meeting took place at Trump Tower on June 9, 2016, the Times reported — two weeks after Trump clinched the Republican presidential nomination.
Trump Jr. said in a statement to CNN that he was not told the name of the person he was meeting with beforehand and told his brother-in-law and Manafort “nothing of the substance” when he invited them to attend. He added that his father “knew nothing of the meeting or these events.”
The explosive story promises to heighten the controversy over the collusion allegations and the President’s meeting with Putin, which have hung over the White House’s policy efforts.

Trump won’t refute Putin, floats joint cybersecurity team
The administration has said the President made a “robust” effort to raise the issue of Russian election interference in his talks with the Russian president. But a dispute over what exactly was said erupted, after the talks on the sidelines of the G20 summit in Germany. Moscow said Trump accepted its arguments that it had not intervened in the election, a version of events the White House denies.
“The President absolutely did not believe the denial of President Putin,”…….

Mon Jul 10 , 2017
By resolution 71/258, the General Assembly decided to convene in 2017 a United Nations conference to negotiate a legally binding instrument to prohibit nuclear weapons, leading towards their total elimination. The Assembly encouraged all Member States to participate in the Conference and decided that it shall convene in New York, […]