Project Blue Beam: Still Crazy After All These Years

Part Two: “We Have The Technology”

On September 28, 1981, President Reagan received a letter from Major Ret. Colman VonKeviczky. VonKeviczky was the Director of the International UFO Galactic Spacecraft Research and Analytic Network (ICUFON). This group held that UFOs “represented an intergalactic task force that will destroy earth unless world leaders band together to end their hostile actions against UFOs.”
VonKeviczky began his career by working for the United Nations staff audio-visual department. In 1966, he wrote to United Nations Secretary U Thant recommending a UFO authority be installed to act as a World Authority for Spatial Affairs. U Thant was interested in the UFO mystery and commissioned VonKeviczky “to work on a preliminary memo on how the UFO problem could be inserted in the U.N. agenda.”

Was the Blue Beam memo that “preliminary memo”?

Are we all taking Blue Beam a little more seriously now…?

A Huge space craft hovers above the Earth. It has disabled all planetary defences. It spits out balls of plasma that encircle the globe, poised to strike.

Trapped within this huge alien vessel is humanity’s last hope: The USS Enterprise and her valiant crew. In a visually stunning sequence, Mr. Spock discovers that this vessel has no crew. It is a living machine of awesome power coupled with childlike emotional development and insatiable curiousity, driven by it’s prime directive: To accumulate and store information, and return that information to it’s creator. For this purpose, V’ger, as the vessel calls itself, is equipped with the aforementioned plasma weapons that break down physical objects into “electronic data”, a gigantic holographic storage and display system, and in a scene deleted from the final movie cut, a “memory wall” that stores trillions of terrabytes of data within crystals.

What is to become of humanity? “You are to be patterned for data storage“. In other words, V’ger intends to reduce human beings to holographically stored, electronic data.

Cracking good science fiction, and of course Captain Kirk and crew save the day and the Earth, while simultaneously assisting V’ger in “joining with the Creator” in the ultimate transhumanist propaganda scene!

Project Blue Beam has been linked, quite correctly, to Star Trek, but for all the wrong reasons, by debunkers who suggest Serge Monast got the idea from Gene Roddenberry’s original screenplay, later novelised as The God Thing:

“After an alien entity declaring itself to be God destroys spacecraft en route to Earth, the Enterprise is launched under the command of Admiral Kirk to engage the vessel. He re-assembles the former crew, including Spock, and sets out to intercept the alien. As they approach the entity, it transports a humanoid probe on board the Enterprise that takes a variety of forms—including that of Jesus. The crew determine that the being and its craft are from an alternate dimension and have been responsible for the creation of religion of numerous planets to teach their inhabitants its laws in a manner understandable at their points in development. The being is malfunctioning; the crew repair it and send it back to its own dimension.[3][4]”

And the plot does indeed have very similar elements to Monast’s claims about the NWO agenda. However, the movie finally released on the big screen almost four decades ago bore little resemblance to this screenplay. The ever-more ambitious ideas and concepts for the production kept the schedule in a constant state of flux and almost bankrupted Paramount.

Part of the problem lay with the insistence on as much scientific accuracy and prescience as possible. One of the pre production crew had visited Livermore Labs where flat screen and touch screen technologies were being developed. The effects team laiased very closely with NASA, who eagerly provided consultants and advice. And as it now turns out, NASA were very busy collating information and research on Holographic display, imaging, data storage and retrieval systems and in fact every possible application for holography, as this document from 1974 indicates.

Four decades ago, the science-military-industrial complex was hard at work developing technology that was being portrayed publicly as science fiction! And now, in the early 21st century, that technology is being used to the full: Everywhere you go, surveillance cameras are watching and recording. Your cellphone (itself an offshoot of Star Trek technology!), your television, and your PC are watching, listening, tracking and data gathering constantly. While you are browsing the internet, the internet is browsing you. Search engines and social media platforms are constantly finding new ways to profile the user. Voice recognition. Facial recognition. Fingerprint recognition. Retina scans. DNA sampling.

Your online preferences and movements are tracked. Your store purchases. Now they want to track your car. Human microchipping is just around the corner.

WE ARE BEING PATTERNED FOR DATA STORAGE.

Why? The most obvious and mundane answer, of course, is for sales and marketing purposes. To figure out who we are and what we like in order to target us individually and try to sell us something.

But it goes much deeper than that.

No, I’m not suggesting the NWO elites are literally intending to blast us into electrons with plasma bolts. I do suggest though, looking at the big picture, that a holographic image of each and every civilised individual is being constructed and electronically stored. Not just a 3-d image, but a close approximation of who we are. Way beyond knowing our tastes for targeted marketing, this electronic data-construct could be used to predict one’s likelihood of disease, of criminal behaviour,  and potentially pre-judge them. Sounds like something out of a Philip K. Dick novel. How far could this go? Potential scenarios include 3d printed replacement body parts tailored to the individual, and having your memories stored as data; a form of immortality. No doubt many readers have seen mainstream news stories about these evolving technologies. Going back briefly to Star Trek: The Motion Picture, V’Ger used the stored “data patterns” of Lieutenant Ilia to recreate her as an android in such perfect detail that even her memories and emotions were reproduced. Seemed far fetched in 1978, but now…? As part of the 2030 Agenda, the UN has stated that it wants to “ID” every living person on Earth.

An important component of this holographic technology is the ability to store, project and retrieve data using crystals. These crystals need to have outstanding dielectric properties; the ability to retain an electrical charge.

Hang on to your hats chemtrail officionados. No doubt you’ve already made the connection.

Can it be any coincidence that SBN is one of the nanoparticulates being touted for stratospheric geoengineering schemes, and allegedly being used clandestinely in spraying schemes right now. Along with another combination, Aluminum-Barium Titanate that holds even greater promise.

I first researched and made connections on this back in 2011, and even then plenty of others had made the connection earlier than this. And there IS evidence in the form of this now-famous US Army document:

Nice documentation, nice theoretical stuff, but it’s all so much words.

Has such sky-hologram technology ever been field-tested?

I believe that it has. A strange and compelling photo has been appearing on the internet over the past six or seven years. One of the first to use it was Norio Hayakawa, who I tried to contact to no avail. Finally, in researching for this blog and after several Image/History searches, I found the source and some valuable analysis.

“Scott Stevens said…
If any photoshop guys want the raw 3072×2304 jpeg image mailed to you just drop me a note.
But, I’d ask that you share your findings and some of your better excerpts of this image with the rest of us here.
I lost a notebook hard drive last winter, and the email that contained this image.. The reader who mailed this to me did so Feb 10th 2008, this person had stated that it was taken the weekend prior. He did say that he got out of his car and took this solitary image and did not see the anomaly until looking a the photo later when back home.”

Here is the raw image uncropped. The observer thought they were taking pictures of intense chemtrailling, and note that the pic was taken outside, so assuming they’re being honest, not a window reflection:

Here’s an enhanced closer look at the indistinct image and “line of fire” effect:

It becomes apparent that the character is a double image. They appear to be projected from the two “fire” lines, and projected onto the two intersecting aircraft trails. There is a web-like lattice of triangulated lines linking the trails, as if (I speculate) some sort of electro-chemical interaction were taking place, creating a screen. This is especially noticeable in the negative enhancement. Could this be an experimental “fog screen” projector in testing?

Someone took the trouble to take away the double, with this result: 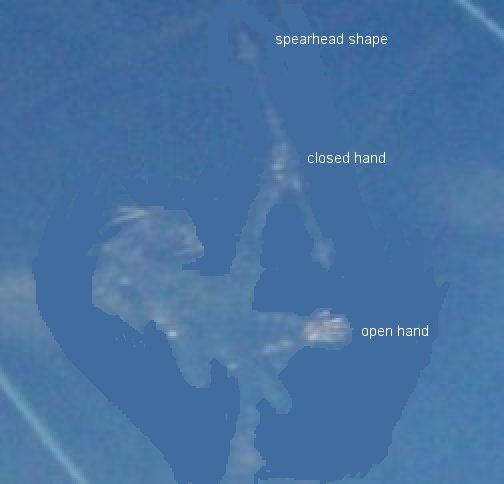 And an interesting discussion of the photo can be found here:

Why the double image? Again I can only speculate, but the 3d effect seems to rely on the image being a composite of two shots of the same object at slightly different angles. Outside of the desired field of view (30 degrees), a double image like this might result. There is also mention of an “annoying bright line” in the Army document, as well as attempts to use a “scattering liquid” which was not entirely successful, resulting in loss of the 3d effect:

The tracking and data-gathering components of the Blue Beam plan have turned out to have a strong basis in fact, as has a connection to Star trek. The infamous holographic light-show component also turns out to be feasible, and there are plenty of examples of various holographic techniques and technologies either in use or in development right now that would work well with a “Blue Beam” alien simulation.

“We present a new method to render aerial images using aerosol-based fog screens. Conventional fog screens are easily affected by air flow, and their fog generators occupy large areas. In this study, we propose to add new tradeoffs between the display time and the payloads. We employ aerosol distribution from off-the-shelf sprays as a fog screen that can resist wind and has high portability. Results showed that the minimum weight of the entire system is approximately 600 g including all components, the screen raise time is approximately 0.5 s, the disappearance time is approximately 0.4 s, and the maximum wind speed at which we can project images is approximately 10 m/s. We conducted user studies on wearable applications, aerial imaging with a drone or radio-controlled model car, multi-viewpoint display, and a display embedded in the environment. This study will contribute to the exploration of new application areas for fog displays, and will augment expressions of entertainment and interactivity.” (My emphasis)

Third and final part of this blog coming soon, thanks for reading!

Amazon drones to scan your house while they're delivering?

Sat Jul 29 , 2017
by Chris Matyszczyk July 26, 2017 10:02 AM PDT Commentary: An Amazon patent granted on Tuesday says its drones will capture data about properties to make future recommendations. Just what will it be doing when it’s hovering above your house? Amazon Preparing for the future means preparing for every part […]