U.S. President Donald Trump escalated his threats against North Korea over its nuclear challenge on Tuesday, threatening to “totally destroy” the country of 26 million people and mocking its leader, Kim Jong Un, as a “rocket man.”

In a hard-edged speech to the United Nations General Assembly, Trump offered a grim portrait of a world in peril, adopted a more confrontational approach to solving global challenges from Iran to Venezuela, and gave an unabashed defense of U.S. sovereignty.

“The United States has great strength and patience, but if it is forced to defend itself or its allies, we will have no choice but to totally destroy North Korea,” Trump told the 193-member world body, sticking closely to a script.

As loud, startled murmurs filled the hall, Trump described Kim in an acid tone, saying, “Rocket man is on a suicide mission for himself and his regime.”

His remarks rattled the leaders gathered in the green-marbled U.N. General Assembly hall, where minutes earlier U.N. Secretary-General Antonio Guterres appealed for statesmanship, saying: “We must not sleepwalk our way into war.”

Trump’s most direct military threat to attack North Korea, in his debut appearance at the General Assembly, was his latest expression of concern about Pyongyang’s repeated launching of ballistic missiles over Japan and underground nuclear tests. 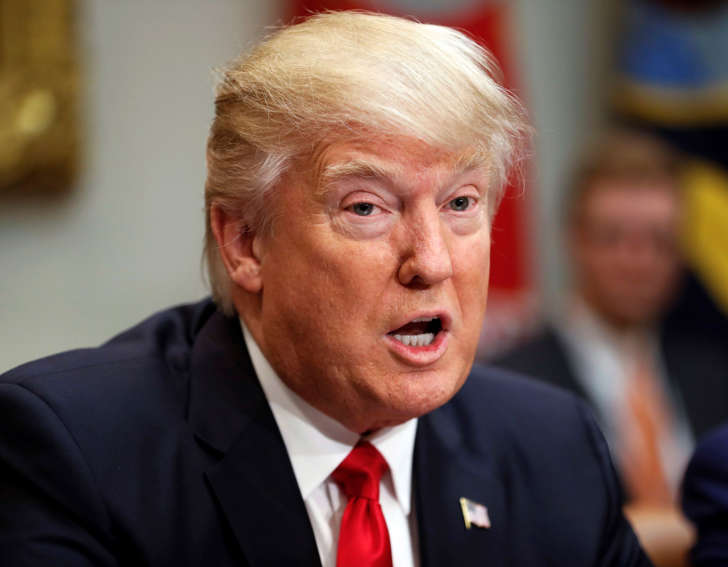 “It was the wrong speech, at the wrong time, to the wrong audience,” Wallstrom later told the BBC.

North Korea’s mission to the United Nations did not immediately respond to a request for comment. A junior North Korean diplomat sat in the delegation’s front-row seat for Trump’s speech, the North Korean U.N. mission said. His speech recalled the fiery nationalist language of his Jan. 20 inaugural address when he pledged to end what he called an “American carnage” of rusted factories and crime.

His strongest words were directed at North Korea. He urged the United Nations member states to work together to isolate the Kim government until it ceases its “hostile” behavior.

In what may have been a veiled prod at China, the North’s major trading partner, Trump said: “It is an outrage that some nations would not only trade with such a regime but would arm, supply and financially support a country that imperils the world with nuclear conflict.”

The U.N. Security Council has unanimously imposed nine rounds of sanctions on North Korea since 2006 and Guterres appealed for that 15-member body to maintain its unity.

Turning to Iran, Trump called the 2015 nuclear deal negotiated by his predecessor, Barack Obama, an embarrassment and hinted that he may not recertify the agreement when it comes up for a mid-October deadline.

There was no immediate comment from either Iran’s U.N. delegation or its foreign ministry in Tehran.

French President Emmanuel Macron, in his U.N. speech, said his country would not close the door to negotiations over the North Korea crisis and staunchly defended the 2015 Iran nuclear deal.

“Renouncing it would be a grave error,” Macron said.

Trump said the United States does not seek to impose its will on other nations and will respect other countries’ sovereignty. He said the U.S. military would soon be the strongest it has ever been.

Trump called the collapsing situation in Venezuela “completely unacceptable” and warned the United States was considering what further actions it can take.

“We cannot stand by and watch,” he said.

Venezuela rejected Trump’s threats and said it was prepared to resist any U.S. actions, even a military invasion. Foreign Minister Jorge Arreaza called Trump a white supremacist who was returning the world to the Cold War of the 1980s.

“He came to the house of peace and promoted war and the destruction of certain countries,” Arreaza told reporters.

Financial markets showed little reaction to Trump’s speech, with most major assets hovering near the unchanged mark on the day.

“He stuck with his script,” said Lennon Sweeting, chief market strategist at XE.com in Toronto. “The dollar/yen jumped around a bit but it’s basically flat. I don’t think we will see any more volatility out of this.”

Wed Sep 20 , 2017
Started streaming 3 hours ago A 7.1 earthquake has hit near Mexico City. There are reports of damage and possibly collapsed buildings. This is the second big earthquake in Mexico in two weeks. We have LIVE BREAKING NEWS COVERAGE of the Mexico earthquake.