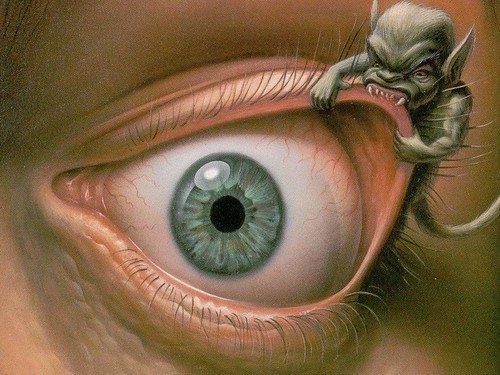 We have enslaved the rest of the animal creation, and have treated our distant cousins in fur and feathers so badly that beyond doubt, if they were able to formulate a religion, they would depict the Devil in human form.

Enlightened as he was, even Inge’s thinking was tainted by the toxin of ego. Who are we human animals (whose collective knowledge of our own capacity to think, learn, and know is still significantly limited), to presume to know that non-human animals do not conceptualize a Devil of sorts? And whether they are able to conjure such a mental abstraction or not is ultimately irrelevant. Objectively speaking, we human animals ARE Devils toward our non-human counterparts, whether they perceive us to be or not. 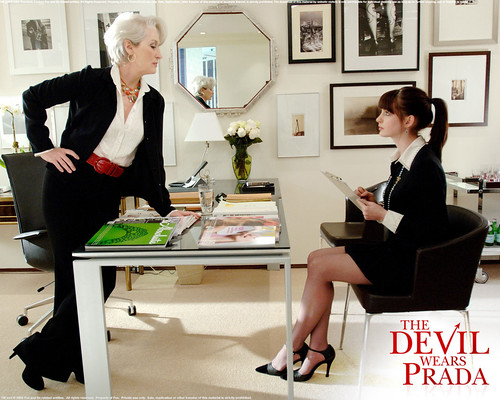 That’s right. We’re all wearing Prada. Whether we’ve winnowed our wardrobe down to a couple of items or are still amongst those who don the apparel of speciesism with the pride of a redneck whose just beaten “his woman” back into submission, we’re all complicit in the systemic infliction of cruelty, oppression, torture, and murder upon our non-human animal brethren.

As Isaac Bashevis Singer wrote, “As often as Herman had witnessed the slaughter of animals and fish, he always had the same thought: in their behaviour toward creatures, all men were Nazis. The smugness with which man could do with other species as he pleased exemplified the most extreme racist theories, the principle that might is right.”

“Might is right” has been a staple of our repugnant reign over this planet throughout the history of human “civilization,” a mode of existence which is so severely malformed that anarcho-primitivists like Derrick Jensen have concluded that the only cure for this cancer upon the Earth is to blow up and start over.

Self-delusional and mentally masturbatory as it may be, we human animals invest insane amounts of energy into maintaining our perverse illusion that we are separate from the “natural world” and possess an omnipotence that enables us to bend the forces of nature to our wills.

Cyrano’s Journal Online and its semi-autonomous subsections (Thomas Paine’s Corner, The Greanville Journal, CJO Avenger, Tant Mieux, and VoxPop) would be delighted to periodically email you links to the most recent material and timeless classics available on our diverse and comprehensive site. If you would like to subscribe, type “CJO subscription” in the subject line and send your email to JMiller@bestcyrano.org

Aside from the pragmatic concern that in so doing we’re fouling our nest so badly that we’re eventually going to be smothered by our own shit, there is a moral component to consider as well. As luminaries like Inge and Singer have reminded us, our heinous and reprehensible collective actions towards non-human animals readily invite and substantiate comparisons between us and Nazis or the Devil.

We mercilessly and thoughtlessly abuse, exploit, and slaughter commodified non-human animals simply to amplify our personal pleasure and fatten our wallets. Despite the slow and choppy moral progress we’ve made in how we treat our fellow human animals, we are still acculturated to view non-human animals as enslaved property or lesser beings, unworthy of the basic rights to life, freedom, and protection from torture.

Occasionally, “civilized people” stumble upon an undercover PETA video that exposes factory farms for the Auschwitzes they are, cringe in horror, and decry the shocking cruelty. Yet an hour later many of those same “born again empathizers” have no problem grabbing a burger from McMurderers, the principal catalyst for the emergence of the factory farm system. 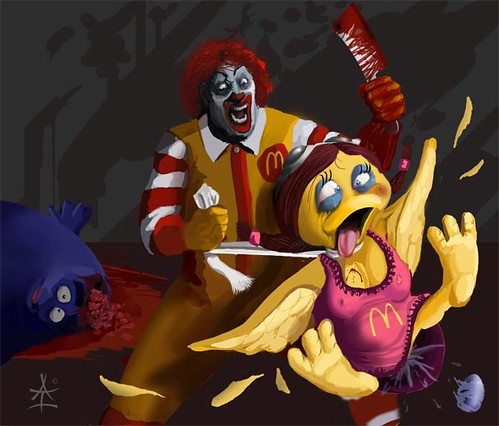 As utilitarian social reformer Jeremy Bentham once stated, “The question is not, ‘Can they reason?’ nor, ‘Can they talk?’ but rather, ‘Can they suffer?’”

Consider just a few of the atrocities many of us commit (with our collective approval and in response to our economic demands) against non-human animals on a daily basis, resulting in abject suffering for billions of animals each year:

Chickens are debeaked sans anesthesia and penned for life in battery cages so small they can’t spread their wings or turn around.

Once those same chickens have exhausted their egg-laying capacities, their throats are slashed. Those that haven’t already bled to death are boiled alive in the scalding tanks used for feather removal. Ultimately, fried chunks of their carcasses make their way into our greedy little mouths via systemic torturers like Kentucky Fried Cruelty. 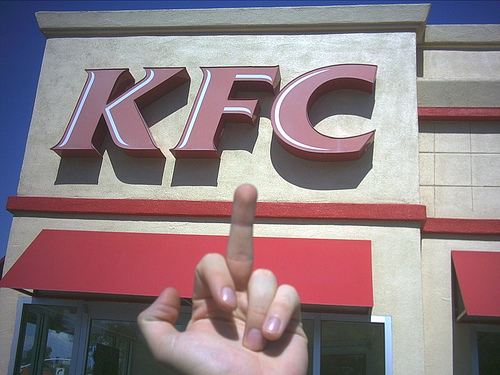 Pigs, creatures more intelligent than dogs (yet not fortunate enough to have gained the favor or the “lords and masters of the Earth” like their canine counterparts), face miserable “lives” in confinements so tiny that they go insane to the extent that their flesh farming executioners pull or blunt their teeth—without anesthesia of course. After all, it would be tragic for the mass-murdering torturers if they lost profit because pigs they caused to be deranged were able to harm one another via biting. In a twisted way, one could even argue that they are humanitarians for protecting their insane porcine “property” from themselves.

Cattle and even our beloved equine friends (slaughtering our friends–more of that gross hypocrisy we “good stewards of the Earth” love to practice) face fates similar to chickens and pigs as souless corporations (advanced capitalism’s ultimate vehicle for rampant exploitation with impunity) degrade, torment and butcher these highly sentient beings to produce meat.

Yes. Meat. That unnecessary luxury we selfishly continue to provide ourselves by murdering billions of non-human animals each year, eradicating the rain forests to make way for grazing lands, rapidly diminishing the supply of potable water, and diverting highly inordinate volumes of precious resources that could be used to feed the 35,000 humans who starve to death each day. 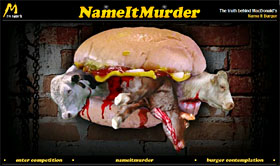 Yes. Meat is murder—of non-human animals, of the Earth and of people.

With the full blessing of the Canadian government, sociopaths armed with cudgels bludgeon over 300,000 baby harp seals to death each year. That’s right. Like the Neanderthals they so resemble, sadistic creatures masquerading as human beings use clubs to bash their victims’ heads until their eyes go are dulled by lifelessness and blood flows forth from their orifices. Often the mother seals bear witness to the horrors visited upon their progeny. Skulls are shattered, brains are reduced to a mass of quivering jelly, tiny innocent lives are brutally extinguished, and only bright crimson stains dotting the once pristine icescape remain to serve notice to the world that the “Children of Eve” have again grossly abused their power by engaging in mass execution to feed the beast of capitalism. 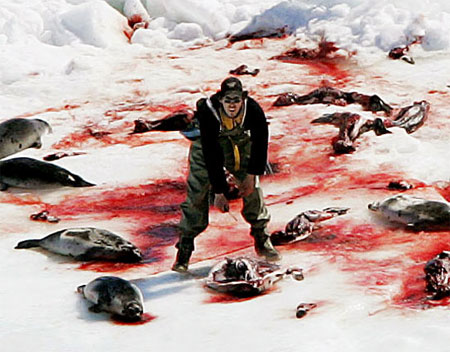 Researchers and scientists, icons of our “advanced civilization,” engage in some of the most barbaric practices one can imagine. In the name of “progress,” cats, dogs, rabbits, mice, rats, monkeys and apes undergo painful, crippling surgeries, spend their “lives” in tiny, barren cages, endure barrages of experimental drugs that have horrendous side effects, and are infected with all manner of diseases, cancers, and maladies. Alternative means to achieve the same goals do exist, but capitalism’s aversion to even temporary increased costs to “accommodate” “unprofitable trivialities” such as morality and compassion presents a powerful resistance to such change. And while they may be more intellectually well-endowed than their factory-farming, seal clubbing partners in crime, animal researchers are no less depraved in the way they treat our non-human animal brethren.

Nearly countless other examples exist, including the “sport” of hunting, dog-fighting, cock-fighting, whaling, commercial fishing, puppy mills, bull-fighting, rodeos, circuses, and the fur industry. As a collective, our infliction of cruelty against those who can’t defend themselves or protest heeds no limit save what is economically expedient.

Even in the rare instances that human conscience prevails, the victory for non-human animals is often Pyrrhic, heavily resisted, symbolic, dismissed by ardent speciesists as “crazy,” or over-shadowed by “more important” cultural or economic concerns. For instance, the Spanish parliament is poised to grant great apes the basic rights of life, liberty, and freedom from physical and psychological torture.

To legally protect other sentient beings from murder, enslavement and torture would be a no-brainer if we humans were as just and decent as we pretend to be. But it has taken the Animal Liberation Movement and the Great Apes Project years to goad humanity into taking this initial baby step in Spain.

Why such resistance? It’s quite simple, really. Speciesism, the belief that human animals are superior to non-human animal species, permeates our socio-cultural “norms” like the perpetual stenches that emanate from factory farms and foul the air for miles around. In fact, speciesism’s fetid odor is more repulsive than that of the rotten-to-the-core system it sustains.

Animal liberationists face stiff opposition from nearly all sides, even the ostensible “pillars of human morality.” Time Magazine’s July 18th article, “In Spain, Human Rights for Apes,” summarized the position of the Catholic Church, one of speciesism’s staunchest defenders:

[And the Catholic Church has spoken out against the Project for eroding the Biblical hierarchy that gives humans dominion over the earth. “This is either a ridiculous society or a dislocated one,” said the Archbishop of Pamplona. “Asking for human rights for monkeys is like asking for bull rights for men.” ]

Given this deeply entrenched delusional belief that we are better than our non-human co-inhabitants of this planet, Inge was right to assert that in the animal pantheon, the Devil would definitely be anthropomorphic. How could it be otherwise when we humans afflict animals with such tremendous unnecessary pain and suffering?

Mark Twain once wrote, “Heaven is by favor; if it were by merit your dog would go in and you would stay out. Of all the creatures ever made [man] is the most detestable. Of the entire brood, he is the only one… that possesses malice. He is the only creature that inflicts pain for sport, knowing it to be pain.”

Like the little Satans we are, we ply our sadistic crafts of animal exploitation, subjugation, and murder with a narcissistic zeal– simply to satiate our desires. Tragically, we are oblivious to the tremendous cost to our victims and to our own souls. 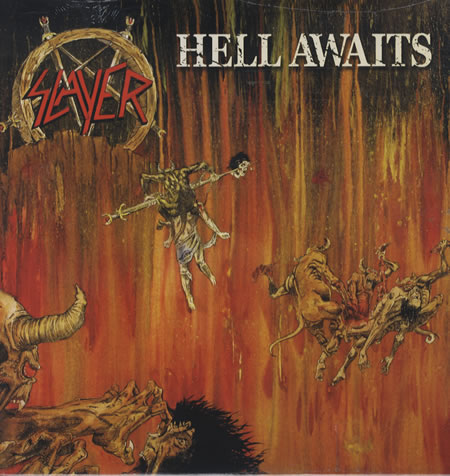 Mon Jul 28 , 2008
https://www.marketoracle.co.uk/Article5594.html 1. Paulson appears on Face The Nation and says “Our banking system is a safe and a sound one.” If the banking system was safe and sound, everyone would know it (or at least think it). There would be no need to say it. 2. Paulson says the list […]