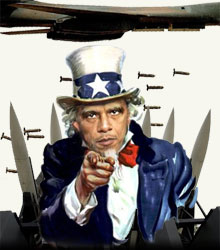 In his latest column for the New Statesman, John Pilger writes that the lauding of Barack Obama has a history and that ‘historical moments’ ought to be less about their symbolism and accompanying histrionics than what they really mean. The question is: what is Obama’s true relation to unchanging American myths about the imposition of its notorious power?

My first visit to Texas was in 1968, on the fifth anniversary of the assassination of president John F Kennedy in Dallas. I drove south, following the line of telegraph poles to the small town of Midlothian, where I met Penn Jones Jr, editor of the Midlothian Mirror. Except for his drawl and fine boots, everything about Penn was the antithesis of the Texas stereotype. Having exposed the racists of the John Birch Society, his printing press had been repeatedly firebombed. Week after week, he painstakingly assembled evidence that all but demolished the official version of Kennedy’s murder.

Mon Nov 17 , 2008
Technology and exams ‘creating robotic children’ An over exposure to technology risks creating a generation of “robotic” children, a leading headmistress warned. By Graeme Paton, Education Editor Last Updated: 9:18PM GMT 14 Nov 2008 A rise in the use of the internet and video games is damaging pupils’ social skills […]