LIA TARACHANSKY, PRODUCER, TRNN: The peace process between Israel and the Palestinian Authority seems to be coming to a stalemate. This week, the chief Palestinian negotiator announced that the two-state solution is no longer viable, as Israeli settlements continue to annex the land of the future Palestine with de facto US support. Many are therefore looking to understand the future of the Israeli occupation of the Palestinian territories if the Palestinians push for one democratic state. With the second intifada over, Israel is changing its approach to the occupation through new technology. Israel’s annual military spending as a percentage of GDP outnumbers even that of the United States threefold, yet this figure does not even include the cost of the occupation, estimated at $9 billion a year. Most of Israel’s defense industry is owned by the government. However, Israel is looking to privatize the maintenance of the occupation and make it possible to maintain control remotely. At the end of October in Bethlehem, the joint Israeli-Palestinian Alternative Information Center held a conference on the cost of the occupation. The Real News attended and spoke to Dalit Baum of Who Profits?and Shir Hever of the Alternative Information Center about the changing face of the Israeli occupation.

DALIT BAUM, WHO PROFITS FROM THE OCCUPATION?: The occupation needs a lot of manpower, and it needs a lot of security manpower, security guards and soldiers. Soldiers, regular soldiers, are very cheap to the Israeli economy because these are conscripts—they don’t get paid. And it really uses a lot of manpower. What it doesn’t want to use, the occupation, and it tries to use less and less of is direct contact with Palestinians during repression, because they don’t want to have any casualties. You can say that in Iraq, too, with the American forces attacking Iraq from above. And we see more and more technologies that try and distance the soldiers from the Palestinians and give more control and more hurting power to the soldier from afar. It doesn’t mean that they use less soldiers. Not at all. It means that the soldiers are situated somewhere really soft. For example, instead of having a guard sitting on the wall with Gaza that will shoot at any Palestinian that comes near to the wall, they have special—something weird there that looks like, I don’t know, coming from outer space. It’s like a sphere. And there are a lot of surveillance cameras inside. And then there are women who sit in a base, an army base inside Israel, far from there, who control these cameras, and when they see something moving, they can shoot it from afar. So they have a room full of people who just control this entire section of the wall with Gaza. The system is called [“ro-EYE-yo-wa”], which means “seeing-shooting” in the feminine, because it’s all women. And it’s quite obscene if you think about it.

SHIR HEVER, ECONOMIST, ALTERNATIVE INFORMATION CENTER: There is actually a manpower shortage in Israel for the Israeli army. The shortage is a result of the fact that Israel has become a very neoliberal state, and there is a cognitive dissonance for people when they are being told by their leaders that, on the one hand, they have to take care of themselves, the state will not take care of you, there is no more welfare or very little welfare, everyone for himself, but on the other hand, they’re saying you have to sacrifice yourself for your country, for your nation, and give the best years of your life to the army. A lot of people are simply not interested anymore. The commanders of the army are the least interested in the boring minutia and details of controlling the checkpoints, controlling the daily lives of Palestinians. They’re much more excited about developing new offensive weapons, fancy aircraft, and that sort of thing. So they’re trying to find ways to save on manpower costs and to make the army, the military, more focused on actual fighting of wars. Occupation has changed the priorities of the Israeli military over years, and that was very apparent in 2006 in the war with Lebanon. So what they’re trying to do now is get the soldiers back into combat roles and to make the checkpoints somehow run themselves. The way that they’re doing that is by focusing on the unmanned aircraft. That’s one way to save on manpower. And Israel is becoming the either number two or number one (depending on the sources) producer and developer of unmanned aircraft in the world for military purposes. And also—and perhaps the main thing is privatizing the checkpoints and contracting private companies to operate those checkpoints, manage them. And these companies are actually doing the same thing: they’re also trying to save on manpower. So what they’re doing is they’re transforming the checkpoints into areas that are very automatic, remotely controlled, where the security guards that are hired to perform the duties that used to be for soldiers are now having the least amount of contact with the Palestinians crossing through the checkpoint. 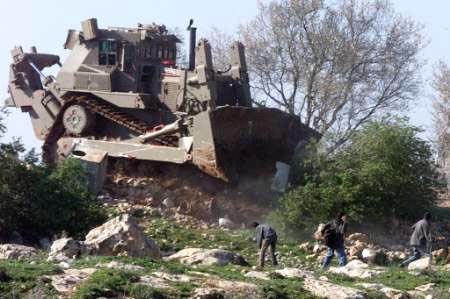 And these D9 bulldozers, just like many other D9 bulldozers in the Israeli army, are just like tanks. They are armored. They have tank and army colors, and they are equipped with weapon systems and cameras and so on. I remember the story I read in the Israeli news a few years back when they destroyed a large part of the Jenin refugee camp using D9 bulldozers. There was an interview in one of the known Israeli newspapers with a driver of this D9 bulldozer and how he worked for days on this bulldozer destroying houses. And in order to do that—he couldn’t go out of the bulldozer, because it was too dangerous. People were throwing bombs at him. But he also couldn’t be really sober, because it’s such a terrible job. So the story—I remember it was quite shocking how this man was driving this bulldozer, destroying houses on top of people, being totally drunk the entire time. So I’m thinking, if you have a person in there, this person, in order to save his own sanity, needs to be totally drunk. So they go to the next stage, which is just having it be a robot or something controlled from afar. Maybe the soldier who operates the unmanned D9 feels like he’s playing a video game; he doesn’t really feel it the same way like he was sitting in the D9 bulldozer.

[ Here’s a photo of one squashing a Palestian home – because Israel wants the land that it was standing on to build ‘settlements’ – thereby expanding its borders. ]

TARACHANSKY: Israel’s security and control apparatus is largely dependent on US funding. Dalit Baum explains how the two nations’ defense industries are tied.

BAUM: Israel is highly dependent on the American production of weapons and gadgets for its security industry. In fact, the US military aid to Israel is a kind of an indirect support of the US military-industrial complex. And when Israelis come up with new inventions for such new types of weapons or machinery, they usually register a company in the US in order to sell to Israel, because Israel can only buy weapons with the US military aid monies in the US. So the Israeli army will buy from an American firm. So we again and again and again encounter Israeli small companies that go off and start a small subsidiary or a bigger company, sister company, in the US in order to sell back to Israel using the US military aid monies. Developers who manage to also contribute to this market praise their products as being tested on Palestinians. And we’ve been to several exhibitions where private companies selling some such products bragged to us in order to sell to us. Because they didn’t know who we were, they bragged to us about their machines or their equipment being used in Bil’in. They actually showed us their product and they said, “You see, this is being used in Bil’in. These are the marks from the stones being thrown at this thing in the demonstration in Bil’in.” They were bragging about it, and sometimes even falsely bragging, which is quite amazing, because it shows you that there is a market that looks for this kind of experience: they want to buy equipment that has been used or has been proven.

Mon Nov 16 , 2009
The Government is working on an exit plan to pull all New Zealand troops out of Afghanistan. [ whoa – my PR press release BS meter just went off …  ] Defence minister Wayne Mapp has admitted that plan includes an acceptance the Taliban will have to be included in […]