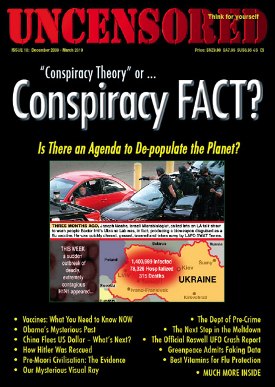 Jon Eisen, the editor of Uncensored magazine, which frequently publishes information related to chemtrailing,  is asking for suggestions on how we can get New Zealand authorities to acknowledge that it is taking place.

Eisen, who resides in Auckland where chemtrailing took place last week,  believes it is clearly being done for depopulation purposes.   The sprays, which evidence shows are often comprised of bacteria, fungi, viruses, dessicated red blood cells, lithium, barium, an aluminium compound, amongst other substances, are causing a wide range of illnesses, as well as poisoning the environment.

While chemtrailing was officially defined as an “exotic weapons system” in the initial draft of HR 2977, a bill introduced in the US Congress in October 2001,  it has not been officially acknowledged to be occurring here in New Zealand.   Eisen said:  “I am at my wits’ end trying to get anyone in positions of  “authority” in New Zealand to pay attention. Any suggestions would be appreciated.  This is clearly a major part of the agenda to reduce the population, but the people are asleep.”

Several years ago Eisen submitted a Freedom Of Information request to Jim Anderton.   “I  asked for any information they might have regarding aerial spraying.   Anderton came back to me that there was “nothing” in their records to  report to me,”  he said.   In addition Eisen contacted an acquaintance at Air Traffic Control in  Hamilton and again, there was  “nothing” to report,  and this was after he provided the contact with photographs of  chemtrails over Hamilton itself!

“We have got to wake up the  populace before it’s too late,”  said Eisen.

If anyone has any suggestions, post them here or write to Jon Eisen at infoATuncensored.co.nz

Google HR 2977. The US Congress acknowledged “chemtrails” as a reality in HR 2977.   – The official definition for “chemtrails” was given in Section 7, “DEFINITIONS”, of House Resolution 2977, a bill introduced in the united States’ Congress on October 2, 2001.  It is important to note that “chemtrails” are an “exotic weapons system”, as defined in Section 7, C.

2) The UK documentary ‘Top Secrets Revealed’ exposes that government scientists “demonstrated in a striking way, the feasibility of small scale biological warfare.” An appreciable dose of viable bacteria was achieved in their tests from an airplane, over an area greater than 1000 sq miles, using only 120 gallons of suspension.

3) Here it is acknowledged by a German TV program:

4) Here is a German weatherman saying he believes it is the military creating the trails:  https://www.youtube.com/watch?v=rHT34GYe6GI&feature=player_embedded

5) A former pilot in Whangarei called Geoff McColl saw one spraying in Whangarei on the 2nd of January and stated:  “What I saw coming out was far too low to be a vapour trail. I guess it was at about 4,000 feet.  The trail was coming out in puffs, as you’d expect if a piston pump was being used.”  McColl was certain that it was not a condensation trail, which are smooth and even.

7) And William Thomas’ talk, which aired on Canadian TV:

CLIMATE CHANGE IS NATURAL: 100 REASONS WHY

Sat Jan 23 , 2010
Source: https://www.dailyexpress.co.uk/posts/view/146138 HERE are the 100 reasons, released in a dossier issued by the European Foundation, why climate change is natural and not man-made: 1) There is “no real scientific proof” that the current warming is caused by the rise of greenhouse gases from man’s activity. 2) Man-made carbon dioxide emissions throughout human […]