1953 : CIA overthrows democratically elected Iranian government, placing the Shah in power. In 1951, Iranian parliament had nationalized the British Anglo-Iranian oil company. This popular move was spearheaded by the reformer, Mossadegh, who was elected prime minister shortly after. Britain and the US organize ruthless economic blockade. Shortly before the coup, the Communist Party calls a 100,000 strong demonstration to protest the US and the Shah.

1954 : Iranian oil re-privatized, with US and Britain in control. Popular opposition compels the Shah to rule through a reign of terror unrivalled in the region. US helps fund huge military and police build-up, and trains Savak, the notorious secret police. Amnesty International would write in 1976 that Iran had the “highest rate of death penalties in the world, no valid system of civilian courts and a history of torture which is beyond belief.

No country in the world has a worse record in human rights than Iran.”

1957-58 : Syria and Egypt take steps toward a merger, reflecting revolutionary yearning of the Arab masses to unite against Western imperialism. The US Sixth Fleet is dispatched, and huge arms shipments are delivered to US client regimes. Syria and Egypt claim to uncover “at least eight separate conspiracies to overthrow one or the other government, to assassinate Nasser, and/or prevent the merger of the two countries.” Independent evidence detailing several of these failed plots subsequently emerges.

1958 : Iraq and Lebanon : Two weeks after 1958 Egypt/Syria merger, the US establishes “Baghdad Pact,” uniting monarchies and puppet regimes against threat of Nasserism and growing Soviet influence.  Mass rioting erupts throughout the region.  Iraqi troops are ordered into Jordan to put down unrest. Under popular pressure, the army mutinies and instead marches on the royal palace. The hated King, Crown Prince, and Prime Minister are lynched.

The next day, US Marines land in Lebanon and British troops are dispatched to Jordan. A virtual civil war erupts as 14,000 US troops enter Lebanon at the invitation of the unpopular, CIA-backed government of Chamoun. Lebanese forces manage to put down the rebellion after months of urban clashes. President Eisenhower would later write: “This somber turn of events could, without a vigorous response on our part, result in the complete elimination of Western influence in the Middle East.”

1963 : Right wing of Iraq’s Ba’ath party leads successful coup with US support, after unsuccessful US assassination attempt against Iraqi leader, Abdul Karim Qassim. The CIA provides Ba’ath party with names of Iraqi communists to murder, and the CP is ruthlessly slaughtered.

1968 : A counter-coup, in which Saddam Hussein participates, leads to nationalization of Iraqi oil in 1972. 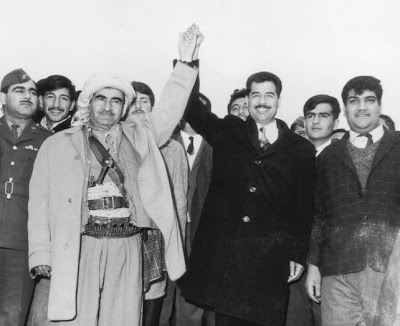 1973-75 : To destabilize Iraq during a border dispute with Iran, US supports Kurdish rebels with $16 million in arms, promising to back them in their struggle for autonomy. When Iran and Iraq reach an agreement in 1975 and seal off their border, Iraq proceeds to violently suppress the Kurdish rebellion. US ends support for Kurds and denies them refuge. Henry Kissinger, architect of the ploy, explained, “covert action should not be confused with missionary work.” 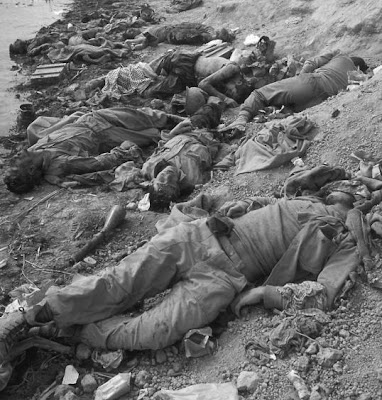 1973, 1978 : A nationalist coup in 1973 brings down the Afghan monarchy. A 1978 coup puts the Stalinist Peoples Democratic Party in power. Afraid of growing Afghan ties to the Soviet Union, US begins covert funding for the reactionary Islamic Fundamentalist rebels. Mujahideen “Freedom Fighters” (according to President Ronald Reagan), are lead by Gulbuddin Hekmatyar, whose “followers first gained attention by throwing acid in the faces of women who refused to wear the veil.” [ … the surviving descendants of whom are currently being slaughtered by the CIA,  the US military, over-paid mercenaries, and New Zealand troops as you read this – those descendants that haven’t sold out their own country, anyway ]

CIA sets up training camps in Pakistan and Afghanistan – some of the same “terrorist training camps” the US will bomb in 2001. Osama bin Laden and many other of today’s Islamic Fundamentalist terrorist leaders are direct recipients of US aid and training. By 1992, more than a million Afghan people will have died, three million disabled, and five million made refugees, in total about half the population.

The civil war continues to this day.

1979 : Striking oil workers and students in Iran call for ousting the Shah, sparking a revolutionary uprising. US tells Shah it supports him “without reservation” and urges him to violently crush protest,

but the Shah is overthrown.

1980 : Iraq invades Iran. Though antagonistic to both countries, the US intervenes to promote and prolong the conflict, looking to weaken both regimes. US opposes UN resolution condemning Iraq’s invasion, takes Iraq off its list of nations supporting terrorism, and allows US arms transfers to Saddam Hussein. US urges Israel to arm Iran, and in 1985 the US secretly provides arms to Iran directly.

US blocks several UN resolutions calling for an Israeli withdrawal. In 1983, US troops also land in Lebanon to intervene in the civil war. 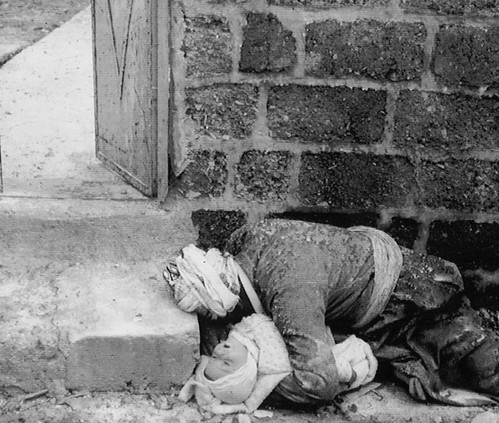 US subsequently restores diplomatic relations with Iraq. A US Defense Intelligence Agency official involved in aiding Iraq later commented that the Pentagon “wasn’t so horrified by Iraq’s use of gas. It was just another way of killing people.”

1987 : As Iran gets the upper hand in war with Iraq, the US moves to decisively back Iraq.

A massive US armada in Persian Gulf ensures arms deliveries to Iraq. When a US gunship shoots down an Iranian civilian airliner, killing 290 passengers, Vice President Bush says, “I will never apologize for America. I don’t care what the facts are.” After Saddam Hussein uses chemical weapons to murder thousands of the Kurdish opposition in Iraq, the Bush administration continues to license the sale of chemical weapons, and blocks UN initiatives to curb their use.

1991 : After Iraq invades Kuwait in 1990, US launches Operation Desert Storm – the most aggressive, high-tech military campaign in the history of warfare.

Dropping more bomb tonnage than in all of Vietnam or World War Two, the 43 day air campaign kills between 100,000 and 200,000 Iraqis and destroys civilian infrastructure. Fearing a popular revolt and the destabilization of the region, the US refuses to aid previously encouraged uprisings by Kurds and Shi’as in the weeks after the war. US denies the rebels access to captured Iraqi weapons, and allows Iraqi helicopters use of “No-fly Zone” airspace to crush the uprising.

1990-now : Severe economic sanctions imposed on Iraq by the UN.

By UN estimates, the sanctions have cost over a million lives, half of them children. About 5,000 children die each month, mostly from malnutrition and treatable diseases. From the most economically advanced country in the region before the US attack, Iraq today is among the most destitute.

1998 : Renewed US and British bombing campaign – called Operation Desert Fox – against Iraq after it exposes US spies among UN weapons inspectors  (later admitted by US officials).

The UN pulls out inspectors before bombings, which continue to the present on average every other day.

2001 : Following the September 11th terrorist attacks, the US launches a war on Afghanistan.

US led UN occupation of the country props up US puppet regime of Karzai.

Thu Feb 4 , 2010
In the mid 19th century, as the Ottoman Empire crumbled, the Western powers set determined eyes on the Middle East (South West Asia). Lord Curzan declared that the Persian Gulf should become a “British Lake.” By the end of World War I, Britain and France assumed direct control of the […]