But already, the US has lost that battle.

It lost it from day one, when troops fired missiles in to a Marjah house, killing 12 civilian occupants–half of them children.

And it lost it further when another three more civilians were blown away by US-led forces.

Finally, it lost the battle as much of the town has been simply destroyed by the fighting.

Results of a US airstrike in Marjah.  Protecting civilians?

The supposed goal of the assault on Marjah was to demonstrate that the US would bring the wonders of good government and peace to the Pashtun tribal people who have endured a generation or more of war, and who have been living under the “cruel tyranny” of the Taliban in recent years.

The new strategy of President Barack Obama and his hand-picked military leader in Afghanistan, Gen. Stanley McChrystal, was to show that the US military could fight the Taliban without causing civilian deaths and casualties.

Protecting civilian lives would be a priority, they claimed.

The problem with such a strategy (if Obama and McChristal were ever really serious about it) is that the whole reason American forces have been able to crush resistance, as they did in the lighting invasion of Iraq in 2003, or the overthrow of the Taliban government of Afghanistan in late 2001, has been their callous disregard for civilian lives, which have been coldly labelled “collateral damage.” 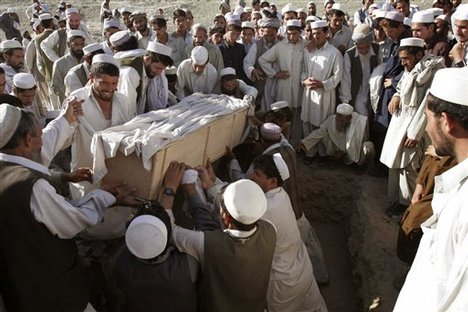 It is not because Americans are uniquely capable soldiers that the US has managed to win battles in places like Panama or Iraq or Afghanistan.

It is because our military is uniquely powerful in its weaponry, and uniquely bloodthirsty and indiscriminate in its use of that weaponry.

In the war in Iraq, and in Afghanistan until recently at least, the American war-fighting style has been for troops to go into an area, seeking to draw enemy fire, and then to call in long-range artillery or air support, and simply blow up the area with heavy explosives, devastating anti-personnel bombs that shower an area in flesh-shredding flechettes, burning white phosphorus projectiles, and a brutal rain of machine-gun fire from fixed-wing and helicopter gunships.

Inevitably with such tactics, countless innocent men, women and children get killed and maimed.

In Iraq, US forces ended up killing far, far more civilians than actual enemy fighters thanks to this approach.

While information about deaths in the Afghan War is harder to come by, it is likely that the same holds true there also.

In addition to the well-known incidents, where air strikes have been called in which ended up butchering entire wedding parties in both Iraq and Afghanistan, or where farm families engaged in routine activties have been blown away thinking they were terrorists, US forces have for years thought nothing about assaulting compounds and killing the inhabitants, innocent civilians or not, children or adults, if it was thought that even one “terrorist” was in the building at the time.

Such tactics, reminiscent of what years ago used to be attributed to vicious military regimes like the German Nazis or the Imperial Japanese, have become the norm for US forces, as has the tactic of “spray and pray,” under which US forces, if they take fire or feel threatened, simply unload all their weapons in every direction, killing every living thing within range, including people who might be seeking shelter behind mud walls of their homes.

These tactics, while criminal in the extreme under the Geneva Conventions, which require that civilians in any conflict be protected, do work in the short term, which is why American forces have prevailed in their initial assaults.

But long-term, they inevitably become self-defeating, since they only turn a population into bitter enemies, many with an understandable desire for vengeance.

Thus, the “new” strategy of trying to minimize civilian casualties.

But once US troops are denied their air support, and are barred by commanders from simply blowing away buildings from which they are taking enemy fire, because of fears that there may be civilians in those buildings, US forces lose any advantage they may have had over local enemy fighters.

It becomes a battle of guns vs. guns and person vs. person, and becomes more of a case of who is more willing to die.

Clearly the Taliban then gains an edge.

Its fighters, or at least many of them, believe they are fighting for Allah, or for their country’s survival and independence, or for both, and they are willing to die for those causes.

What are American forces fighting for in Afghanistan?

I suspect many, if asked, would say they have no idea.

Some, I’m sure, would say they are “defending America” if asked thanks to their indoctrination, but I also suspect that as they survey the primitive society in which they are fighting, and see the poverty of the people, they will have a hard time perceiving Afghanistan as any kind of threat to their own country or families.

Some may say they’re avenging the attacks on the World Trade Center and the Pentagon “by Al Qaeda” in 2001, but then, even the US government admits that the foreign fighters of Al Qaeda have long ago left Afghanistan, and no Taliban were involved in the 9-11 attacks.

So it’s hard to see American troops being willing to die for these trumped up “causes.”

I suspect, again, that most US troops are understandably trying really hard mainly to make sure they don’t get hurt or killed.

And that’s why, in the end, the US is losing this war.

It’s why those deadly Himars rockets were fired and why air assaults are being called in after all in Marjah, and why civilians are again being slaughtered by American forces in this battle.

It’s why, despite promises to the contrary from Gen. McChrystal and Commander in Chief Obama, the town is being wrecked.

And in the end, it will be all for naught, since the US is supporting a wholly corrupt and criminal regime in Kabul which will not follow up the ultimate “victory” in Marjah with some kind of honest and well-functioning government in the destroyed city.

We will no doubt see some photogenic reconstruction in Marjah when the fighting subsides.

We’ll see some demonstration projects which will be dutifully praised by the journalistic shills flown in by Pentagon flaks.

And when the Taliban return to the town, as they inevitably will after the Americans withdraw or draw down, they will probably be welcomed, or at least tolerated.

The reality is that America cannot prevail in Afghanistan except by applying the massive, oppressive power of its military killing machine, with its robotic rocket-firing drone aircraft, its bombers and attack aircraft, its fixed-wing and helicopter gunships, its indiscriminate anti-personnel weapons, and its massive bombs.

It cannot prevail, in other words, without terrorizing the population.

And even then, in the end, it cannot succeed.

[ Can someone tell me why New Zealand is fighting and killing people in Afghanistan ?

I need to have it explained to me again ]

I Envy The People Who Hate Israel

Sun Feb 21 , 2010
At times like these, I envy the people who passionately, frankly, with all their hearts, despise Israel. Hate Israel enough, and the Jewish state’s failings and blunders, its self-satisfied blindness and its resultant self-destructive policies, cause not pain, but delight. Hate Israel enough, and you’re spared all inclination to try […]