Description:
Israels vicious attack on Turksih ship aid to Gaza leaves 19 confirmed dead with the death toll estimated to grow. How long will Israels occupation of Palestine and blatant disregard for human life continue to go on?

In cities all over the world, people are mobilising in solidarity with those massacred by the State of Israel on the Freedom Flotilla to Gaza. In Auckland, groups such as Students for Justice in Palestine, Global Peace and Justice Auckland, Unite on Campus and Socialist Aotearoa will be going hard over the next few days- postering, leafletting and signing people up to the Palestinian solidarity movement on stalls all over the city- outside mosques, on campus, on the main streets and in the workplaces.

We need a huge march on Saturday. This is one massacre too many. Enough, Israel, enough.
You have absolutely no shame.

Big protest this Saturday- meet at Aotea Square at 1pm.

Global Peace and Justice Auckland is calling on the New Zealand government to close the newly opened Israeli embassy in Wellington in the wake of the murder of 19 civilians on the flotilla of boats travelling to Gaza to break the Israeli blockade of the Gaza strip.

New Zealand must act now. GPJA has written to Foreign Affairs Minister Murray McCully urging the closure of the Israeli embassy and the ending of special arrangements for Israeli students visiting New Zealand. McCully says he wants to keep dialogue open but he is only talking with one side – the criminal side – of the Middle East conflict.

The United Nations representative in Gaza, John Ging, has called on the international community to breach the Israeli blockade of Gaza because of the humanitarian crisis in the territory. Israel maintains a chokehold and only allows a slow drip-feed of food, medical supplies and building materials to enter the Gaza strip.

The flotilla were merely responding to this international appeal for humanitarian support when they set out with 600 people from 30 countries and a cargo of hope for the beleaguered people of Gaza.

The Israeli attack on the unarmed flotilla which left the 19 people dead is just the latest in a long series of war crimes committed against the people of Gaza alongside flagrant breaches of international law by the Israeli state.

Israel is now desperately spinning a distorted account of the incident to try to deflect international criticism from its brutal, inhuman activities.

Israeli says the Gaza blockade is to stop rockets being smuggled into the area but this is a ruse. It is Israeli policies in the territory which are driving terrorism. The Palestinian resistance is fighting back against Israel in the same way the French resistance fought back against German occupation of France during World War II.

Israel is the rogue state whose policies towards Palestinians including the Israeli Arab population are the drivers of terrorism and the greatest threat to world peace and security anywhere.

GPJA Activists will be meeting on Wednesday at the Unite Union office at 7pm to plan a protest for Saturday in Auckland. 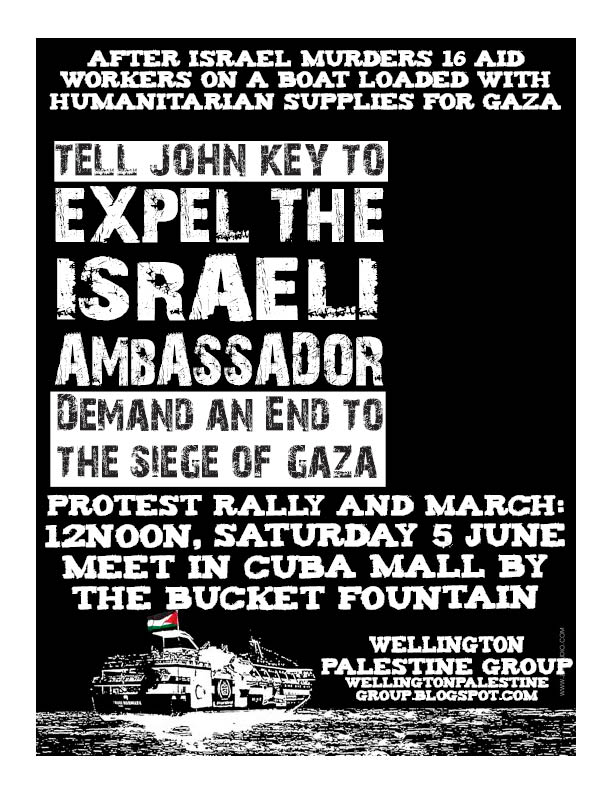 SQUEEZING PALESTINE OUT OF EXISTENCE