is commonly used to try to discredit criticism of the powerful in government or business.

For example, just this week – after Tony Blair was confronted by the Iraq Inquiry

that he had used lies to sell the Iraq war

– Blair dismissed the entire Iraq Inquiry as simply being part of Britain’s “obsession with conspiracy theories”.

(Not only did Blair know that Saddam possessed no WMDs,

but the French this week accused Blair of using of ‘Soviet-style’ propaganda in run-up to the Iraq war). 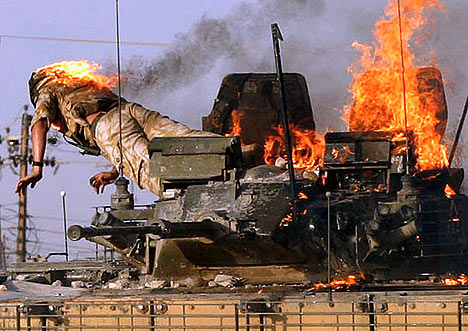 Of course, the American government has been busted in the last couple of years in numerous conspiracies.

For example, William K. Black – professor of economics and law,

and the senior regulator during the S & L crisis

– says that that the government’s entire strategy now

– as during the S&L crisis

– is to cover up how bad things are

(“the entire strategy is to keep people from getting the facts”).

Similarly , 7 out of the 8 giant, money center banks went bankrupt in the 1980’s during the “Latin American Crisis”,

and the government’s response was to cover up their insolvency.

And the government spied on American citizens

while saying “we don’t spy”.

The government tortured prisoners in Iraq,

but said “we don’t torture”. 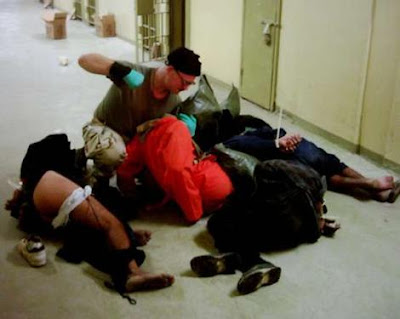 [ A cell phone photo of a human piece of shit,

In other words, high-level government officialave conspired to cover up the truth.

“All wars are based on propaganda.”

[ As in ‘Truth Being The First Casualty’ of said wars, and so on ]

A concerted effort to produce propaganda is a conspiracy. 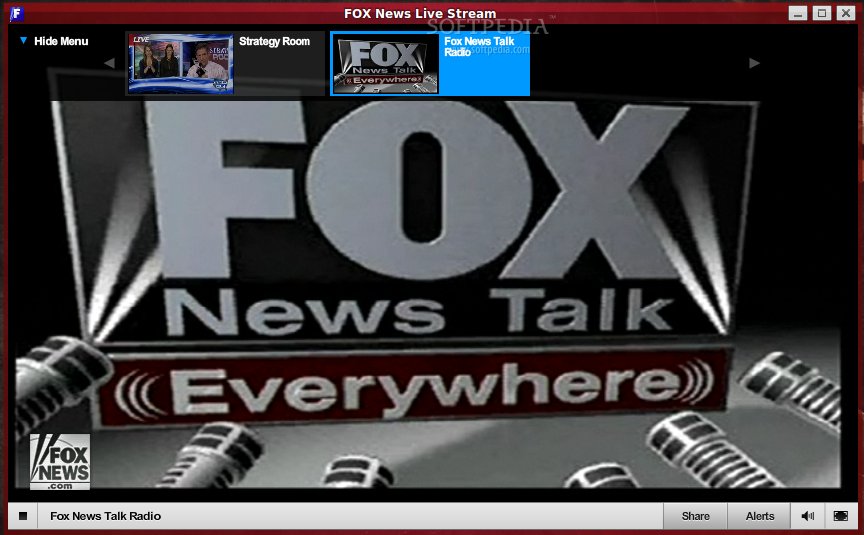 The heads of Enron

were found guilty of conspiracy,

as was the head of Adelphia.

Numerous lower-level government officials have been found guilty of conspiracy.

“Some financial market conspiracies are real …

Most good investigative reporters are conspiracy theorists, by the way.”

Indeed, conspiracies are so common that judges are trained to look at conspiracy allegations as just another legal claim

to be disproven or proven by the evidence.

– they may be strongly opposed to considering that the wealthiest or most powerful might possibly have done so.

Indeed, those who most loudly attempt to ridicule and discredit conspiracy theories

tend to focus on defending against criticism involving the powerful.

This may be partly due to psychology:

may in fact be human beings with complicated motives

who may not always have their best interests in mind.

– and a favored pick for the Supreme Court (Cass Sunstein)

Defined a conspiracy theory as

“an effort to explain some event or practice by reference to the machinations of powerful people,

who have also managed to conceal their role.”

He has called for the use of state power

[ … and it is this ‘calling for the use of state power to crush conspiracy allegations of state wrongdoing’,

that makes him an asshole ]

and neoconservative critic of anti-war movements on both the left and right,

around anti-war issues and civil liberties,

which he claimed were motivated by a shared belief in conspiracism or anti-government views.

In other words, prominent neocon writer Kelly believes that

everyone who is not a booster for government power and war is a crazy conspiracy theorist.

Similarly, psychologists who serve the government

… and displaying an inquisitive, imaginative outlook”

This is not really new.

anyone who criticized the government was labeled crazy,

and many were sent to insane asylums.

The bottom line is that the power of the state

is used to crush criticism of major government policies and actions

(or failures to act)

Pay attention, and you’ll notice that criticism of “conspiracy theories”

is usually aimed at attempting to protect the state and key government players.

. . . at least to the extent that they are not important to the government.

Thu Aug 26 , 2010
https://wikileaks.org/wiki/CIA_Red_Cell_Memorandum_on_United_States_%22exporting_terrorism%22,_2_Feb_2010 Release date August 25, 2010 This CIA “Red Cell” report from February 2, 2010, looks at what will happen if it is internationally understood that the United States is an exporter of terrorism; ‘Contrary to common belief, the American export of terrorism or terrorists is not a recent phenomenon, […]