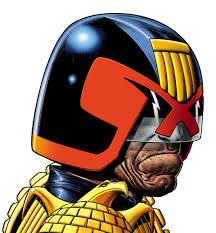 while Dredd “is the most feared of elite Street Judges, with the power to enforce the law, sentence offenders and execute them on the spot – if necessary.”

Tone wise it says this will be a return to the “dark, visceral incarnation” of the character seen in the comic.

Despite not a frame of the film being shot as yet, shooting kicks off shortly in South Africa,

the financiers have secured around $30 million in financing for the project.