in a night-time bombing of two houses in Nawzad district of Helmand province Saturday. 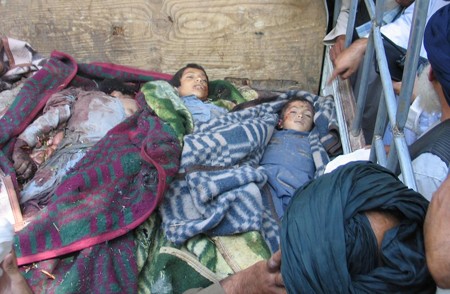 The incident, one of several involving civilian deaths recently,

is yet another atrocity committed by the US-NATO forces engaged in the illegal occupation.

According to local Afghan officials, the fourteen civilians died as they slept in two family compounds in a small farming community

the world has grown weary of this decade-long war and doesn’t really care two hoots whether it’s Taleban insurgents or innocent civilians who are wiped out by the indiscriminate US-NATO bombings.

The Americans do not want to be reminded of the mess created by their trillion-dollar war abroad at a time when they have more pressing things to worry about,

As a result, the coalition forces kill at will

The Syrian Regime Must Go ... Now

Wed Jun 1 , 2011
The gruesome images and horrifying accounts that keep coming from Syria defy linguistic description. They go beyond the pale of human decency. A few weeks ago, Hamza al Khatib, a vivacious and charming boy from Dira’a was abducted from his home by the regime’s Shabbiha thugs or death squads, for […]