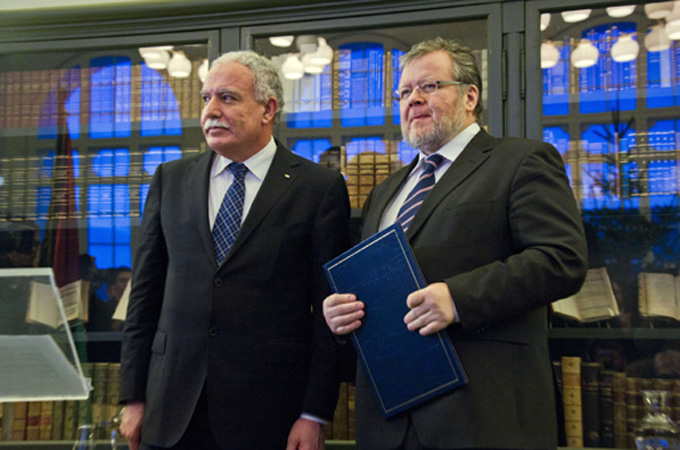 three months after the Palestinians began to seek full membership of the United Nations with peace talks with Israel frozen indefinitely.

at a news conference in Reykjavik.

“We stood by our word, we have supported the Palestinian cause and today will not be the end of that,

we will continue to do so,” he added.

Palestinian Foreign Minister Riyad al-Malki said: “[This] will surely have positive influence on other states to follow the same steps.”

The two also announced the establishment of diplomatic relations between the Nordic island nation and the Palestinians.

“There will be an ambassador from Iceland that will present his credentials to the Palestinians, a non-resident,

and … we are contemplating the possibility of appointing an honorary consul, an Icelander, here for the time being,” Malki said.

Thursday’s ceremony at the Reykjavik Culture House follows two years of preparations and a vote in the Icelandic parliament, or Allthingi,

on November 29 in favour of recognising the Palestinian state on the borders that existed before the 1967 Middle East war.

Surveying Perceptions Of The Future Among Kiwis ~ Can We See Where The World Is Heading?

Fri Dec 16 , 2011
All the major political parties in New Zealand agree that preservation of a clean, sustainable environment is an essential component of good governance and that pollution (specifically including air pollution) poses an enormous global threat to our way of life and our future. They have each published good intentions for […]