Most fictional sports created for the screen or page

tend to come across as contrived,

“Rollerball” is not one of them.

The futuristic game of “Rollerball” has achieved a rare state among fictional creations.

In the 1975 movie starring James Caan,

the filmmakers were effectively able to convince an audience they are somehow watching a real sport.

(In fact, some of the stuntmen and athletes who appeared in the original film

actually looked into starting a league and playing for real after the movie was a hit.)

I had always been fascinated that someone could make up an imaginary game that seemed so believable,

and over the years I tried to track down the rules and figure out how they were conceived.

That it was a sport which combined roller derby,

(and was set in a shiny dystopian future),

only added to the appeal.

which first appeared in the September 1973 issue of Esquire.

Mr. Harrison was a professor of English and Creative Writing at the University of Arkansas

and was inspired to pen a “little experimental story”

after seeing a fight break out on the court during a college basketball game.

the home team was energized and came back for the win,

and afterwards Harrison began to wonder just how violent sports in the future might become.

He pictured men “on a great roulette wheel,

while they skated around slashing at each other with spiked gloves.”

He later added motorcycles and explosions,

and imagined what sort of society would encourage such a sport. 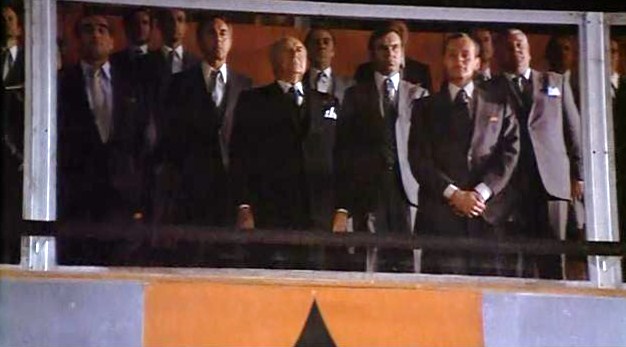 is deliberately improbable and over-the-top,

with the rules constantly changing to increase the mayhem to the point where it is impossible to survive a game.

while central to the action,

isn’t the point of the story

– this is a cautionary tale about a corporate-controlled future

and its corrosive effects on society.

who is not a science fiction writer,

was as surprised as anyone when his science fiction story sold,

and even more surprised when it was optioned for a motion picture.

He wrote a treatment for the film,

describing the game in greater detail,

and eventually went on to write the script.

The sport in the unpublished script is similar to the one in the short story,

with a few basic changes,

but still keeping many of Harrison’s original ideas such as multiple balls in play and passengers on the cycles. 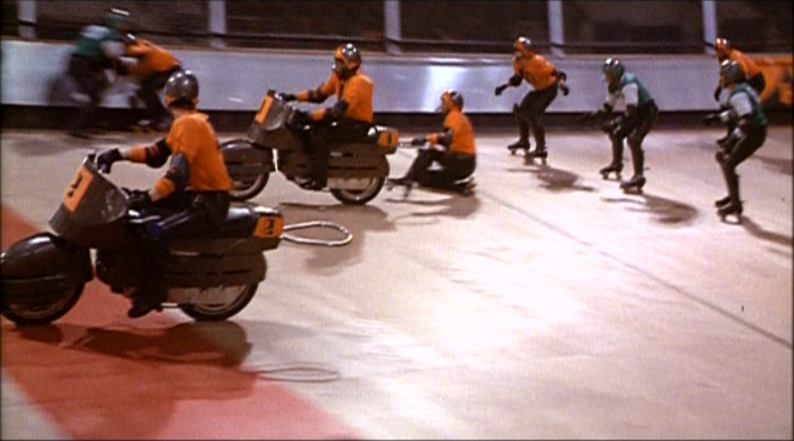 As they prepared to begin filming,

(and the requests, ahem, of the movie studio.)

“Great attention was paid to the game,” said Harrison.

Now here’s where it gets interesting.

According to a speech the writer gave back in the 1970s,

the director quickly lost control of the shoot to its star, 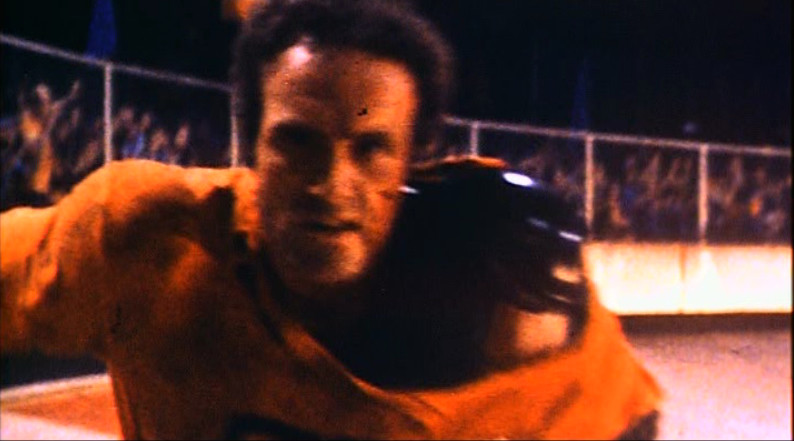 who began to make up his own lines.

The stuntmen, some of whom were friends with Caan,

began to demand their own lines and even rewrote one of the scenes.

The whole set apparently became quite competitive and a “kind of jock atmosphere prevailed.”

Even when they weren’t filming,

the stuntmen would often play on the track,

coming up with their own rules for the game.

In the Special Edition DVD of the film,

Jewison said they played the game over and over until they figured out how it should work.

By the end of filming,

much of Harrison’s dialog had fallen by the wayside,

and the game continued to mutate beyond his initial design.

After the movie was edited,

additional voiceovers were created for a sports announcer who wasn’t in the original script.

someone in United Artists’ marketing department

collected together most of the rules to be included in the press kit that went out to the media when Rollerball was released.

Copies of these “real” rules have been almost impossible to find and have never been posted online until now.

The movie was an international box office hit,

and generated a great deal of press regarding the violence it portrayed.

– and by extension, the growing concern over violence in sports in general.

Over the years, even as the sets and futurism of Rollerball became dated and cheesy,

the action scenes of the game were still exciting to watch

– and still feel like you’re watching a real sport.

The first rule of Rollerball is:

Nobody talks about the Rollerball remake.

Mon Apr 2 , 2012
The nine parties to the Trans-Pacific Partnership agreement (TPPA) negotiations made a dramatic and unexpected u-turn, agreeing to lift the veil of secrecy on their draft texts and background documents. Critics of the obsessive secrecy that surrounds the negotiations hailed the decision as a triumph for democracy. … The announcement […]