Wanna Know How it Went? Just Look at This Picture! 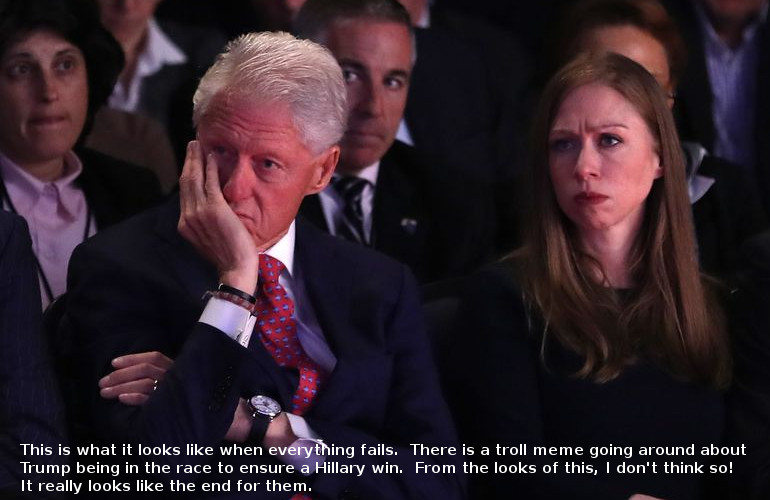 Trump is doing much better this time. I am having problems updating (it took a half hour to post this one line) but Trump told her she’d be in jail and the FBI would be investigated if he could make it happen.

He’s BLOWING HER AWAY. She’s DONE. I will comment on this in depth tomorrow, but this is like an early christmas!

OMG!! Hillary just said “Even if you DON’T vote for me I’m going to be president, and I want to be the best president.”

3 against Trump. Both moderators were hammering Trump. It is all so corrupt it showed clearly and is going to hurt!

Let’s see how much the polls get scammed this time! Any support for Hillary now ought to be out of sympathy.

BATTLE TACTIC Over 800 forums and blogs linked to this web site already, in October alone. That is POWER, let’s use it! Go to every forum you know of. HERE IS WHAT YOU POST AS A SUBJECT LINE: Hillary called her own voter base a bucket of losers!

After that, SAY THIS: “If Hillary thinks Trump supporters are a “basket of deplorables” and her own voter base is “a bucket of losers” then CLEARLY she does not represent America. Who does she really represent? THE ONE PERCENT GLOBAL ELITE, there is nothing else!

THEN TAKE THE CAPTURE OF HER SPEECH TO GOLDMAN SACHS AND EMBED IT BELOW THAT, TO PROVE THIS IS NOT B.S. AND THAT SHE REALLY DID CALL HER OWN VOTERS A BUCKET OF LOSERS!

Hillary cannot survive such clear proof that she “deplores” the entire population of America, and wishes only to serve the elite. This needs to be spread far and wide, ARCHIVE AND POST!

Sat Oct 15 , 2016
Hillary R. Clinton is disqualified from holding any office in the United States TMR Editor’s Note: Sometimes TMR finds the best blogs posted in the form of comments under our various articles found at other alternative news websites. Such is the case with the following post. What Ralph has done […]