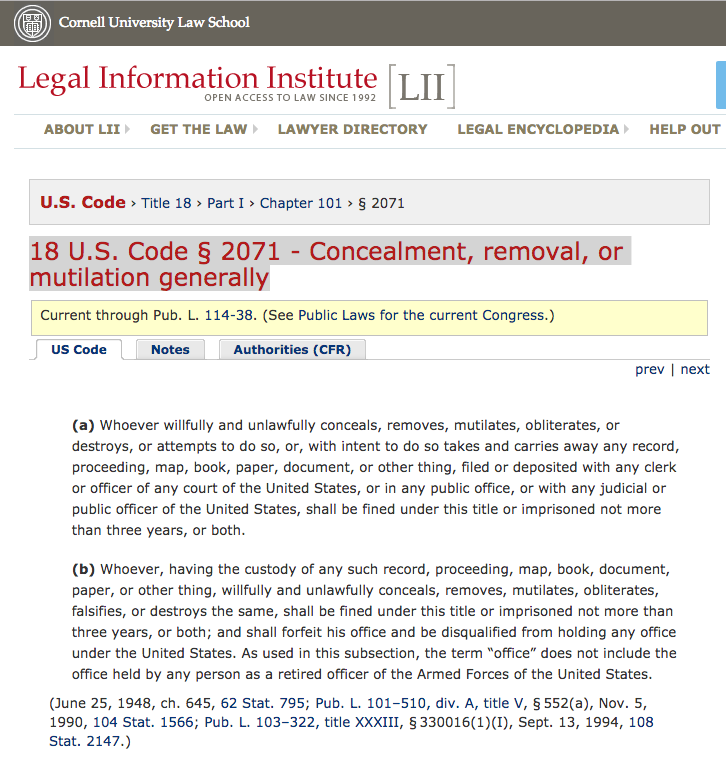 Hillary R. Clinton is disqualified from holding any office in the United States

TMR Editor’s Note:
Sometimes TMR finds the best blogs posted in the form of comments under our various articles found at other alternative news websites.

Such is the case with the following post. What Ralph has done is simply followed the law, as in the relevant federal statutes which categorically apply to Hillary Clinton’s admitted direct actions pertaining to Emailgate.

By going right to the core statutes, it ought to be clear — even to those exceedingly corrupt lawyers and lawmen at the FBI — that Candidate Clinton should be barred from holding public office in the United States of America.  Case closed.  Forever!

For anyone who doubts such a self-evident proclamation, the references listed below effectively constitute the basis for a very serious citizen’s indictment.  The volumes of incriminating information and damning data now found on the Internet regarding Ms. Clinton’s official misconduct and many wrongdoings indicate that the Federal Bureau of Investigation is also in on this all-too-obvious cover-up.

The Clintons: Just how many bodies are there?

Hillary Clinton: The True Story That Will Terminate Her Presidential Aspirations

Hillary Clinton Has Enabled A Sexual Predator Husband For Decades

Why is the Clinton Emailgate Scandal so HUGE?

Clinton and Obama, the Arab Spring and the Creation of ISIS

The Clinton Foundation: A Typical ‘CIA-Directed NGO’ That Is Completely Above The Law

The foregoing list of high crimes and felonies only represents what we know about the Clinton Crime family, as all of this material can be found in the public domain.  Therefore, the real concern about such a deep and broad rap sheet belonging to a presidential candidate is: How and why do so many Americans still support Hillary Clinton, and so many with fanatical loyalty and devotion.  That, right there, is the real shocker! ! !

HILLARY CLINTON: The Most Dangerous Presidential Candidate in U.S. History

Sometimes the hard truth appears in the funniest places … like a Law Library.

Interesting read! Wonder how many people are aware. Word for word from the Cornell Law Library – RE: Hillary R. Clinton’s personal email and home-based server

VIDEO: Former AG Michael Mukasey States That Hillary Clinton Has Disqualified Herself To Be POTUS

For those of us who do not have United States Code[1] committed to memory, here’s exactly what it says:

“(a) Whoever willfully and unlawfully conceals, removes, mutilates, obliterates, or destroys, or attempts to do so, or, with intent to do so takes and carries away any record, proceeding, map, book, paper, document, or other thing, filed or deposited with any clerk or officer of any court of the United States, or in any public office, or with any judicial or public officer of the United States, shall be fined under this title or imprisoned not more than three years, or both.

(b) Whoever, having the custody of any such record, proceeding, map, book, document, paper, or other thing, willfully and unlawfully conceals, removes, mutilates, obliterates, falsifies, or destroys the same, shall be fined under this title or imprisoned not more than three years, or both; and shall forfeit his office and be disqualified from holding any office under the United States. As used in this subsection, the term “office” does not include the office held by any person as a retired officer of the Armed Forces of the United States.”
(Source: 18 U.S. Code § 2071 – Concealment, removal, or mutilation generally)

Yes, it explicitly states “shall forfeit his office and be disqualified from holding any office under the United States.”

Shouldn’t voters know that? The media won’t tell them. So it’s up to us.

Can you help hold Hillary accountable?
Pass this on, please.