Attorney for Joseph Schawb, charged with driving under the influence of a drug when his blood test showed only caffeine, calls the charge unheard of

Caffeine may be the “nootropic” brain drug of choice in Silicon Valley, but an hour’s drive north in Solano County, California, the stimulant could get you charged with driving under the influence.

That is according to defense attorney Stacey Barrett, speaking on behalf of her client, Joseph Schwab.

After being pulled over on 5 August 2015, Schwab was charged by the Solano County district attorney with misdemeanor driving under the influence of a drug.

Almost 18 months later, Schwab is preparing to go to trial. The only evidence the DA has provided of his intoxication is a blood test showing the presence of caffeine.

Shcwab was driving home from work when he was pulled over by an agent from the California department of alcoholic beverage control, who was driving an unmarked vehicle. The agent said Schwab had cut her off and was driving erratically.

The 36-year-old union glazier was given a breathalyzer test which showed a 0.00% blood alcohol level, his attorney said. He was booked into county jail and had his blood drawn, but the resulting toxicology report came back negative for benzodiazepines, cocaine, opiates, THC, carisoprodol (a muscle relaxant), methamphetamine/MDMA, oxycodone, and zolpidem.

The sample was screened a second time by a laboratory in Pennsylvania, according to documents provided to the Guardian, where the sole positive result was for caffeine – a substance likely coursing through the veins of many drivers on the road at any given time. 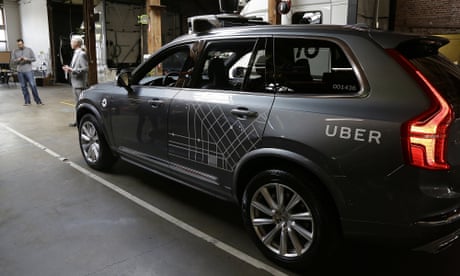 Company is taking its fleet of self-driving cars to Phoenix at the governor’s invitation, after California regulators struck down the unauthorized trial

“I’ve never seen this before,” said Barrett. “I’ve never even heard of it.”

Barrett has filed a motion for the case to be dismissed because the charges were not brought until June 2016 – nearly 10 months after incident. If that motion is denied, Schwab will take his case to a jury on 11 January.

Sharon Henry, chief deputy district attorney for Solano County, said in a statement that her office was “conducting further investigation in this matter”.

“The charge of driving under the influence is not based upon the presence of caffeine in his system,” she added.

Barrett counters that if the prosecution has evidence of a different drug in her client’s system, it should have to provided that to her, based on the rules governing criminal procedings.

“I have not been provided with any evidence to support a theory of prosecution for a substance other than caffeine at this time,” she said. “Nor I have received any statements, reports, etc documenting any ongoing investigation since the [toxicology report] dated 18 November 2015.”

Henry declined to comment further, citing the right to a fair trial.

“It’s really stupid,” said Jeffrey Zehnder, a forensic toxicologist who frequently testifies in court cases. Over 41 years, Zehnder said, he had never seen a prosecution for driving under the influence of caffeine.

“If that’s the case, then they better come and arrest me,” he joked.

Zehnder was informed about the case by Barrett, but has not been contracted to testify on either side.

California vehicle code defines a “drug” as any substance besides alcohol that could affect a person in a manner that would “impair, to an appreciable degree” his ability to drive normally.

Making that case with caffeine would be difficult, Zehnder said, because the prosecutor would have to show that impaired driving was specifically caused by the caffeine and not any other circumstances.

“There are no studies that demonstrate that driving is impaired by caffeine, and they don’t do the studies, because no one cares about caffeine,” he said.

As for Schwab, he just wants this ordeal to be over. In a statement provided to the Guardian by his attorney, he said his reputation had been damaged.

“No one believed me that I only had caffeine in my system until I showed them the lab results,” he said. “I want the charges to be dismissed and my name to be cleared.”

Pope Francis: Is He Obsessed With The Devil ?

Tue Dec 27 , 2016
https://vimeo.com/85267101 please note that this video clip is now three years old, but it continues to raise questions about the nature of the current Pope’s apparent obsession with Satan, as this more recent (August 2016) article indicates: In a rather strange article, CNN asks why Pope Francis is “obsessed” with […]