Law-breaking, resolution-busting Israel in a sulk after being told to play by the rules. 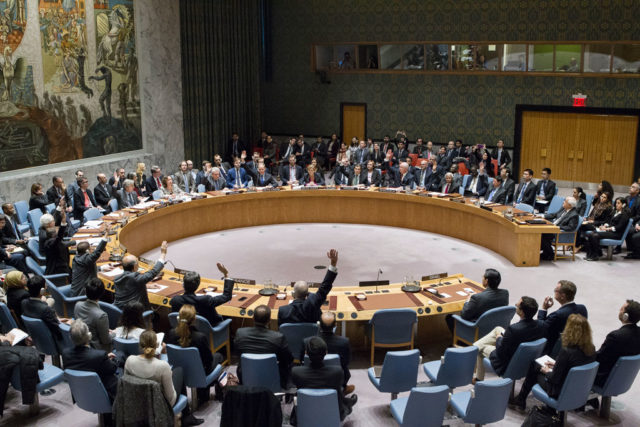 Nothing could have been more calculated to ruin Hanukka for the Israeli High Command and bring Christmas cheer to the Palestinian Christians and Muslims they have abused and terrorised for decades. Yes,  the UN Security Council finally had the balls to adopt a resolution condemning Israeli “settlements” (posh word for illegal squats) on stolen Palestinian lands.

A statement from Prime Minister Benjamin Netanyahu’s office says: “Israel rejects this shameful anti-Israel resolution at the UN and will not abide by its terms.”

That’s good. The BDS boys and girls with be rubbing their hands with glee. It’ll mean a massive boost for the Boycott, Divestment and Sanctions campaign, particlarly as 200 legal scholars and practising lawyers from 15 European countries have assured everyone – including those governments that misuse their power to try to scupper boycotting of Israeli goods and other interests – that BDS is actually a lawful exercise of freedom of expression. It is protected by the International Convention on Civil and Political Rights and any attempt to outlaw it undermines a basic human right and amounts to supporting Israel’s violations of international law.

A not-so-good consequence is that Israel’s attitude problem is likely to ratchet-up anti-Semitism yet again. But Israelis are well aware that Jews worldwide suffer for the Jewish State’s misbehaviour, so the remedy is largely in their own hands.

Still railing against the Security Council, Netanyahu says: “Peace will come not through UN resolutions, but only through direct negotiations between the parties.” He speaks, of course, with his military jackboot on the neck of the Palestinian people. His idea of negotiations, as always, is holding a gun to the head of the other party. As everyone, especially America, knows peace doesn’t suit Israel’s purpose although the pretense of seeking peace does.

And not content with defying the UN, Netanyahu wants revenge on the countries that co-sponsored the resolution, namely New Zealand, Malaysia, Venezuela and Senegal. He’s taking petty diplomatic reprisals against NZ and Senegal like recalling ambassadors and cancelling official visits.

So what exactly does the resolution say? It condemns all measures aimed at altering the demographic composition, character and status of the Palestinian Territory occupied since 1967, including East Jerusalem, and the construction and expansion of settlements, transfer of Israeli settlers, confiscation of land, demolition of homes and displacement of Palestinian civilians, in violation of international humanitarian law and relevant resolutions.

The US didn’t have the backbone to support the resolution, only to abstain. Furthermore, despite its tough wording, this was only a Chapter 6 resolution with more growl than bite. The situation clearly calls for a Chapter 7 job as Israel’s actions most definitely “constitute a threat to the peace, a breach of the peace, or an act of aggression” requiring coercive and enforceable measures.

Nevertheless it wasn’t entirely a waste of time. It turns a spotlight on Israel’s criminal conduct, it will have the effect of releasing the brake on various civil society actions against Israel – especially BDS – and it will hasten the day when countries slap sanctions on the rogue state and demand Israel’s expulsion for repeatedly failing to meet the obligations of UN membership.

The US ambassador to the UN, Samantha Power, explaining America’s reasons for applying her veto, quoted Reagan in 1982: “The United States will not support the use of any additional land for the purpose of settlements during the transitional period….  Further settlement activity is in no way necessary for the security of Israel and only diminishes the confidence of the Arabs that a final outcome can be freely and fairly negotiated.”

She said those words “highlight the United States’ long-standing position that Israeli settlement activity in territories occupied in 1967 undermines Israel’s security, harms the viability of a negotiated two-state outcome, and erodes prospects for peace and stability in the region. Today, the Security Council reaffirmed its established consensus that settlements have no legal validity. The United States has been sending the message that the settlements must stop – privately and publicly – for nearly five decades.”

As Power also pointed out, the total settler [squatter] population in the West Bank and East Jerusalem now exceeds 590,000 and nearly 90,000 are living beyond the separation Wall which itself cuts well into Palestinian territory.  In the last few months Israel has planned for more than 2,600 new settlement units. “Rather than dismantling these and other settler outposts, which are illegal even under Israeli law, now there is new legislation advancing in the Israeli Knesset that would legalize most of the outposts – a factor that propelled the decision by this resolution’s sponsors to bring it before the Council.”

However, even if every settlement was dismantled Israel’s military occupation of the West Bank and Jerusalem and blockade of Gaze would still be in place.

The World Jewish Congress (WJC) President Ronald S. Lauder complains that once again the UN “singles out Israel for condemnation. It is shocking that 14 of the 15 members of this council voted in favor of the resolution.” Whining about Israel being singled out is a favourite refrain, as is another of Lauder’s remarks that peace can only be reached through bilateral talks between Israelis and Palestinians.

People like Lauder don’t seem to comprehend that peace can only be achieved within a the framework of international law and a level playing field. Lopsided negotiation between an armed bully still in possession of stolen property and an unarmed, dispossessed weakling is no basis for a just peace.

Meanwhile J-Wire reports that Christian Zionists in New Zealand – the Flaxmere Christian Fellowship – condemn what their pastor calls “the anti-Israel resolution outlawing Israeli settlements.” He adds: “We are disgusted at the leading role New Zealand played today at the UN. This is a day of shame for New Zealand. This resolution denies the rights of the Jewish People to build and live on the Holy Land of Israel, Land that has been promised to them in an everlasting resolution by a much greater authority than the New Zealand Government or the United Nations but by the God of Nations Himself….

“At a time when we should be celebrating the birth of the Jewish Saviour we have decided instead to back an anti-Semitic, anti-Israel Resolution at the United Nations. We condemn the UN Resolution completely.”

All that matters, then, is the mythical rights of the “Jewish People”, not the legitimate rights of the genuine Palestinians. They don’t even get a mention.

The Flaxmere Christian Fellowship website carries a map showing occupied Palestine as all-Israel. It promotes the following statement: “Regarding Israel, we believe it is their God given right to inherit the Bible Land of their forefathers, and this includes Judea & Samaria (West Bank) which is currently the matter of dispute between Israel and those who call themselves Palestinians.

“Part of the problem regarding the Middle East conflict is ignorance. Many people are ignorant of the historical facts not to speak of the Bible narrative. We as a church aim to bring education to people —especially Christians, regarding the unique plan God has for the Jewish People & Israel in these last days.”

Inside the church the flag of Israel hangs beside the New Zealand flag. It’s an interesting insight into the mixed-up mind of the Zionist.

Netanyahu’s office states that ​​”Israel looks forward to working with President-elect Trump and with all our friends in Congress, Republicans and Democrats alike, to negate the harmful effects of this absurd resolution.” So he’s banking on Trump being as crazed as he is.  If that turns out to be the case, we’re all in trouble.