Celebrities and assorted confection can’t get their lives into even a semblance of reality. Yet they want to soapbox their dysfunctional takes on the socio-economic fabric of the world, domestic politics, and foreign policies. On any of which  they have no idea whatsoever.

Madonna, for one, should concentrate on not having to use Autotune software, or Lipsync her concerts. The fans might begin to question. And they criticised Milli Vanilli and The Monkeys. 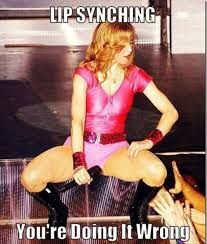 The current phenomenon of nauseous, political, celebrity brain malfunction, must be connected to a short attention span, the gravitas of fashion, and looking like you know what you’re talking about. And unfortunately for the challenged, bullshit has never baffled brains.

They are neither leaders nor representatives of anyone. Their ‘following’, such as it may be, is not allied to their personal ideological capture, real or pretend.

Wear a little blue ribbon, if you intend to vocalise, to signal that you have no idea. It’s a bit like walking and talking simultaneously. We give our seats to the physically  challenged in public transport. We need to be compassionate to those displaying various retardations of the political kind.

The clueless are actually displaying displeasure, because the vast majority of the legitimate American constituency did not approve of a real life White House version of ‘Weekend at Bernie’s’. Or a raving Boadicea.

The smarter ones of The Electoral College knew that there was a massive fraud exercised by The Dems, last November. So much for the non-existent Russian Hack. Legitimate challenges, by The GOP,  would have held. And the notion of a Two Party System, as there exists in many other Western nation states; would have collapsed more visibly in America.

They did not appease or compensate. There was no repudiation or abrogation of The Constitution. They acted correctly as The Constitution demands. The GOP won that election in every aspect, despite all the attempted Dem frauds. The Dems destroyed their own party. Lateralised fault attachments have failed. In due course, the noise will abate. It has no substance.

Their articulated disengaging, and what they have done to The Democratic Republic of America, is to be pitied.

California; the great eco state, instituted policies that have aggravated its running out of water. The absurdities that were allowed to run during the stewardship of Mr.S. as governor are very interesting.

They might even be able to make a claim against the massive fraud of carbon credits. The slowly unravelling inconvenient lie. Both Gore and Kerry being compensated for dancing The GWB Side Shuffle.

A dam was half emptied to allow some fourteen stranded fish to swim away. Lest they be caught and eaten. The same people putting bricks in their toilet cisterns to reduce water flow. Notice how your toilet cisterns are getting smaller. The more intelligent and moral having gained the ear of regulators.

So we have to flush more than once, actually using more water than before. Then of course we had the absurdity of lowering the temperature of our hot water systems. The argument of preventing children scalding themselves had partial merit. But the real crux was the illusion of saving energy. So we use a greater mix of hot to cold. Again destroying that particular rigorously citated junk.

These are the same illusionists complaining about dirty coal. Having coal railed about the country to power stations, previously purpose built over coal reserves. Gross stupidies started in America. And adopted as essentially  cute, in such nations as Australia. They could never take a peek to look for the handlers and the real agendas.

And we haven’t even discussed the complex foreign ownership scam of utilities. The same light headed having crude oil railed (conned by rail interests) about America. When the real world used pipelines. The argument of spillage; predictably and since clearly demonstrated to be a total stupidity. The accidents and devastations stand. As do the real facts regarding Fracking. The absurdity of the ‘Real women wear fake fur’ campaign, that followed on from The Baby Fur Seal Affair with Brigitte Bardot in tow is a classic example. It began in 1975, when American synthetic fur manufacturers sent  their agents provocateur into the field.

The real story has almost no connection to the emotive gripped fiction. The seals were clubbed by the French film crew. The Canadian Inuit did not want to be involved. And the true story is even more tragic. To block disease and the ravaged fishing industry, massive Canadian government slaughters have been organised.

A problem that did not exist was created and exacerbated to the ecological disaster that it became. And for what purpose? For a hidden American lobby group to capture a market share of the fur trade. Aided and abetted by morons in The Canadian Administration of the day.

Nestle and Wal Mart in California were virtually guaranteed their water needs, while others suffered restrictions. Wal Mart is tapering it’s operations. And Nestle is moving out.

Mr.S. of course is the great celebrity with a packaged persona and a true history a little different to that postured for populist consumption.

Concerning The American State Department caused tragedy in The Ukraine, he commented: ‘If I could get my hands on that Putin’. A rival for the award with Australia’s Tony Abbott who wanted to ‘Shirtfront Putin’.

What do these ‘leaders’ eat for breakfast. It certainly isn’t brain food.

Perhaps they should have consulted Bubba concerning The Kursk Incident of 12/8/2000. Poor Bubba had not only lost The American Nuclear Codes, but also The USN was running its own operations in The Russian Barents Sea.

The Kursk Tragedy did not occur as a result of an initiating explosion in The Kursk. It was rammed by two USN submarines in Russian waters. One limped to Scotland and the other to Norway with history later fudged on the naval record books.

Now that terrible fellow Putin contacted Bubba and clarified with him, the real definition of Unprovoked Act of War. And further explained what he (Putin) was expected to do under the circumstances.

Now Putin being a peaceful fellow in the normal sense; much maligned and misunderstood; Bubba having his mind absorbed by other passions, and disregarding the antics of his Bodiceia, like a good little fellow, read the Russian script to MSM as instructed.

Problem solved. The American caused tragedy consigned to an agreed history. But reigning in the control that had been lost is not always an issue of theory intersecting reality at a user friendly point.

The Russian Naval Kursk, was actually a GRU assigned submarine. It was rammed by The USS Memphis and The USS Toledo. The RN Splendid was also involved. Many manipulations of the events have been promulgated. And as with the distorted movie of The Benghazi Incident, a movie was made concerning a Russian submarine, that helps confuse the reality. The Philadelphia Experiment and Kettering, are other examples

On 4/10/2003, journalist James Forlong was found dead. He was investigating the true history of The RN Splendid. I am reminded of the deaths of David Kelly (WMDs), and Robin Cook (Middle East). And even the manufactured dalliances of DSK. While the real ones of others, were hidden as ‘Official Secrets’, or matters of ‘National Security’.

On 9/8/2014, the leading edge USN submarine, The USS Virginia, demonstrated that its stealthness is part of the mythology. (There are some interesting comparisons concerning The USAF during The Kosovo War.) The Virginia was ‘discovered’ within a half hour of crossing into The Russian  Barents Sea, and chased out. All these events are sadly morale busters for The American Military.

On 12/4/2014, The USS Donald Cookthe leading edge US Aegis destroyer, was electronically ‘shut down’ by The Russian Airforce, in The Black Sea.

One of the many such incidents confused on the net, concerning dates:from 2014 to 2016 and location; The Barents Sea, The Bering Sea, or The Black Sea. Apart from The Treaty of Montreaux agreements, concerning the flying of naval ensigns in The Black Sea. Often photoshopped, or shots of open sea sailing being substituted.

The Gulf of Mexico, to this day, leaks radiation from purpose sunk USN vessels; from the days of a prior age of scientific theories. Operations Fishbowl and Starfish are classic. Protected by The CFC Lie they expect the same junk science about climactic fantasies to be taken seriously.

Radiation certificates are required for the export of Yellow Fin Tuna, yet it can be consumed freely in North America. A far greater devastation than the 20/4/2010 Deepwater Horizon Incident. Again fictionalised in a motion picture, to mask the reality. And as with The 24/3/1989, Exxon Valdez Incident, again suffering a motion picture sterilisation. Radiation and toxic food products are a bigger issue than oiled birds, or, it might get warmer.

The Savannah Delta Project; was a catastrophy waiting to happen. As were Bhopal, Seveso, and Minamata. But we don’t hear of those. We know of Fukushima, and maybe Chernobyl. But Three Mile Island is hidden away. And The Goldsborough Incidents are almost unknown

It’s time to forget the unknowns and concentrate on pivotal social issues. Is The NSA reading Facebook?. How to increase the awareness of Global Warming. How to block oil pipelines. In the meantime we can enjoy our piece of Vietanamese catfish. Fresh from the bottom of the rivers, that has fed on the defoliants and cacinogens dropped on the hapless region under Nixon’s insane Operation Ranch Hand.

The White House Press Room has grown from 49 to over 400. Less CNN, The NY Times, The LA Times, Breitbart, certain disgruntleds, and MSM stalwarts, unable to help themselves. And of course the use of live feeds confusing the fiction writers has caused disarray.

The road to recovery for America; and as a consequence; virtually all The First World; will neither be easy, nor painless.

One thought on “Celebrities And Assorted Confections”

Sun Mar 5 , 2017
You will never find a better verbal explanation than this. Dutchsinse is a veteran researcher and observer who’s developed an amazing knack for earthquake forecasting. For those who may not know, HAARP is up and running after a temporary hiatus, and is just one of a whole worldwide network of […]