Search for Clues to What Causes Whale Strandings 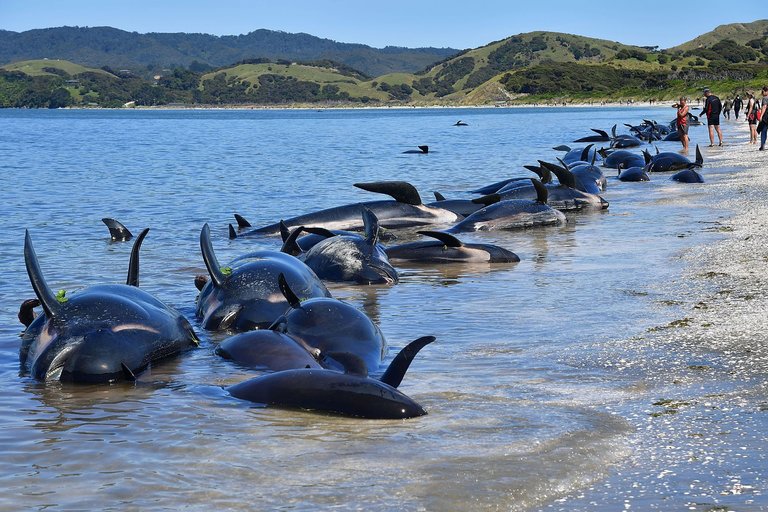 Pilot whales during a mass stranding in New Zealand. Scientists speculate that the large amounts of energy that dolphins and whales expend when fleeing threats may be linked to mass strandings. Credit Marty Melville/Agence France-Presse — Getty Images

Take half a dozen retired Navy dolphins and put them in a huge tank with a trainer and some oversized hula hoops for six months and what do you get? Potential clues to unraveling the mysteries behind why some marine mammals are susceptible to mass strandings, scientists hope.

In a study published Wednesday in The Journal of Experimental Biology, scientists showed that dolphins and whales used more energy to swim fast than to cruise at normal speeds. This may seem obvious, but marine mammals aren’t supposed to get tired swimming. We have assumed that these master divers have adapted physiological workarounds that help them conserve oxygen and energy. And most of the time, they have. But this study suggests that vigorous swimming to avoid threats — posed by people as well as predators — could come at a cost to mammals that live in the seas.

Terrie M. Williams, who studies ecophysiology at the University of California, Santa Cruz, and her team worked with trainers to encourage the dolphins, as well as one retired theme park killer whale, to perform a variety of behaviors in large saltwater tanks. Some animals would rest at the surface or submerged, move in a straight line across a pool, cruise the perimeter or dive down to swim through hoops placed in different arrangements at the pool’s bottom. To the sound of a whistle, they surfaced beneath a special hood and inhaled air while Dr. Williams measured their breathing and oxygen intake. Across a variety of settings, she also measured heart rate, the frequency and amplitude of swimming strokes and swim gait.

Her team found that there was not a big difference between the energy the animals used at rest and while swimming at average speeds that range somewhere from 5 to 8 feet per second, according to the study. But drag in the water that increases with speed makes the cetaceans exert more energy as they move faster; the dolphins nearly doubled their normal energy use when swimming their hardest.

“When you’re trying to go at top speed, you’re really huffing and puffing,” she said. “ For these dolphins and whales, it’s the same thing.”

With the new results, Dr. Williams and her team created a model that would allow other scientists to predict the energetic cost of different swim styles in a variety of whales and dolphins. They hope their data can be used to understand how some dolphins and whales react physiologically to threats.

In the wild, a whale or dolphin normally swims in short bursts and glides that help it conserve energy. Dolphins and whales swim faster while hunting prey. But when avoiding a predator or human disturbance (like military sonar or seismic exploration), it may ascend from a dive quickly, switching to faster, constant strokes that last longer than usual. In a separate study, Cuvier’s beaked whales increased their speed and stroke rate for nearly two hours after exposure to sonar.

Dr. Williams applied the model to data from that study, and found that the whales would use around 30 percent more energy to power their fins as they rapidly swam away.

The extra energy it takes to flee a perceived threat may have important implications for what happens to marine mammals physiologically during mass strandings, said Dr. Williams.

“You would think that the marine mammals would have it figured out,” she said, protecting themselves by collapsing their lungs or lowering their heart rate during a dive.

She points to a case in 2002, when a handful of beaked whales thought to be trying to escape sonar from naval exercises wound up stranded in the Canary Islands. Oddly, despite adaptations allowing the whales to dive at great depths, some showed signs of decompression illness, the same condition that affects some scuba divers when they ascend too quickly. The illness, also called the bends, results when compressed air bubbles get trapped in body tissue or vital organs, including the brain.

Although she has yet to prove it and admits that the contributions to mass strandings are still poorly understood, Dr. Williams speculates that oceanic noise may contribute to the strandings of some beaked whales through some combination of changes in swimming style, increased energy demands and lack of oxygen to their brains.

“This would explain the ‘disorientation’ of stranded whales often cited by rescuers trying to coax the animals back into deeper water,” she said.

Andreas Fahlman, a comparative physiologist who studies deep-diving animals at Texas A&M University at Galveston and was not involved in the research, said that this new study was limited in its methods, but that increased work effort suggested overexertion in animals that could lead to elevated carbon dioxide levels, which could put them at an increased risk for bubble formation.

Dr. Williams is continuing her work in the wild with narwhals and hopes her research will contribute to a better understanding of how threat and escape affects marine mammals.

“In some ways marine mammals are built just like us,” she said. “In other ways they’ve adapted to that oceanic living in ways that we just don’t understand completely”.