Personally, I think this is not so much a British 9/11 as a case of corruption by maintenance neglect of an old building. Nevertheless, the correlation with Ramadan observance was a fortunate coincidence (not that this wasn’t catastrophic enough):

Muslim residents of London’s Grenfell Tower, who were awake during the night because they were observing Ramadan, helped save lives after a deadly fire tore through the block, witnesses say.

The 24-storey building in the capital city’s west went up in flames in about 15 minutes in the early hours of Wednesday.  More than 200 firefighters battled the blaze well in to day light, and officials have warned it will take days for them to search the block for survivors or victims.

A local woman told a gathering outside the block that more people would have died if not for the actions of a number of Muslim boys. 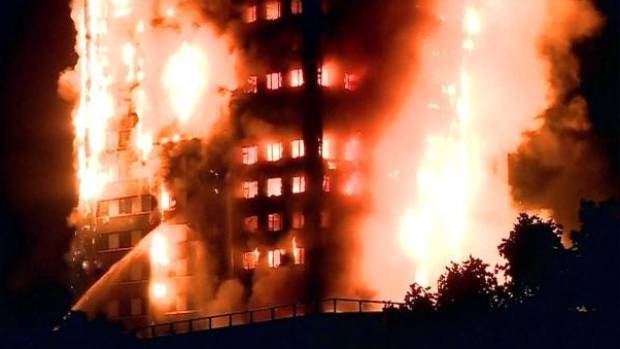 The height of the fire early on Wednesday, when hundreds of firefighters spent hours trying to get it under control. There were still people inside the tower at the time.

She said the boys knocked on doors, yelling in an attempt to alert residents in the absence of fire alarms.

READ MORE:
* London fire: The ones who are missing
* Woman dropped baby from burning block
* ‘They were warned’: Residents call tower disaster in the making
​* Neighbours heard children screaming for help
* London fire: ‘It was a war zone’
* London fire: Warnings ignored, bad advice given 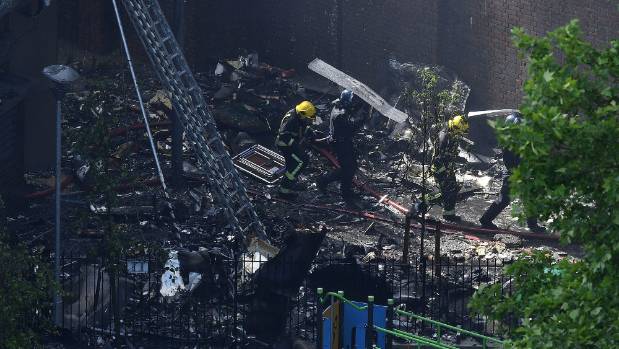 Firefighters use a riot shield as protection from falling rubble at the 24-storey block.

“They were the first people with bags of water, giving to people and helping people – running and telling people.”

During the fasting month of Ramadan, Muslims do not eat during daylight, instead staying up late and getting up early to do so. 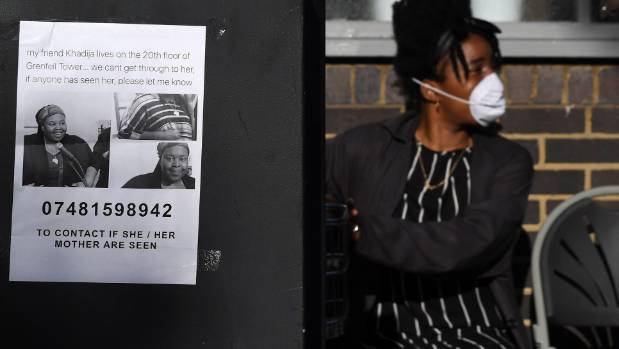 A post for one of the many missing residents of Grenfell Tower near apartment building.

Another resident told The Huffington Post UK that young Muslims made the difference for a number of sleeping families, with the blaze breaking out at the west London tower block just after 1.15am.

The Huffington Post spoke to Khalid Suleman Ahmed, 20, who moved to the eighth floor of Grenfell Tower not long ago. 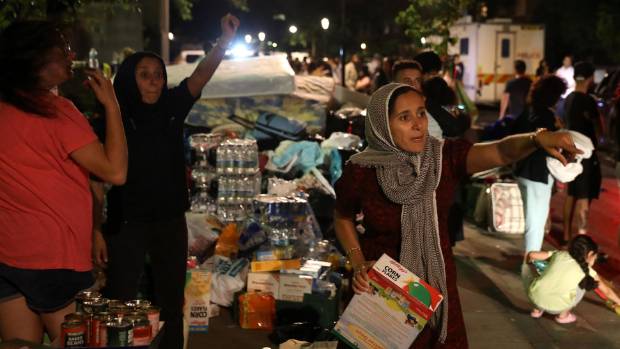 Clothing and refreshment are laid out near the fire scene. Many of those who managed to flee the flames took nothing with them from their houses.

He said he had stayed up to eat before daylight fasting began about 4.45am.

“No fire alarms went off and there were no warning. I was playing PlayStation waiting to eat suhur [the meal that begins the fast] then smelt smoke.

“I got up and looked out of my window and saw the seventh floor smoking,” he said. 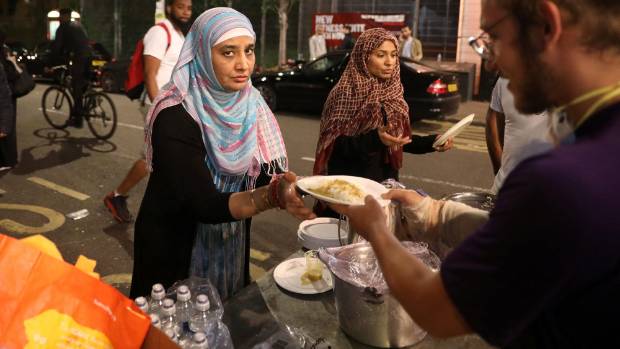 Food is distributed near the tower block.

“I woke my auntie up, then got clothes on and started knocking on neighbours’ doors. Every house opened except two – I saw the other guy later on so only one family unaccounted for. My next door neighbour was fast asleep.

“I would be up this late on a Friday night possibly but never a random midweek night unless it was Ramadan.

“There are a lot of Muslims living there and people choose up to stay up and wait so it was certainly a factor for me and others. It probably did save lives. 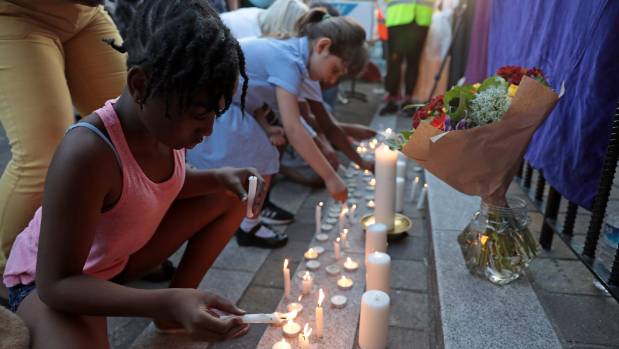 Prays are said and candles are lit outside Notting Hill Methodist Church during a vigil for people caught up in the disaster.

“The whole corridor went black with thick smoke. I didn’t think it was serious at all. Me and my auntie thought it was an isolated incident but we’d just evacuate just to be safe.

“When we went out and were taken by the firemen to a safer place then we saw that it still hadn’t reached our house – 20 minutes or so later our house was gone.

“The firefighters were very quick. They immediately started work.”

One thought on “London fire: Muslims awake for Ramadan meal save residents of flaming Grenfell Tower”

Sun Jun 18 , 2017
THE sun could have been born with an ‘evil twin’ responsible for some of the deadliest extinction events in Earth’s history. By Sean Martin Scientists have been working on a hypothesis which suggests that the majority of stars are formed in a binary system, meaning there would be more than […]