Take this blog any way you like. Humour, speculation, entertaining or just nonsense. Or maybe, just maybe, there’s something to all this……?

Donald Trump: Just mention the name and you’re sure to get a strong reaction. Love him, hate him, can’t make head nor tail of him? One thing is for sure: He is the most colourful and controversial US president of them all. I’m sure many were stunned that he actually got into the Oval office. a surreal moment, and the situation seems to get more surreal the more you look at it.

Since the day he took the job, his opponents have screamed about Russian meddling with the electoral process, and yelled from the rooftop about impeachment. Oh yes, they have evidence they say, and they’ll bring him to justice.

And yet Trump, so far, appears to be untouchable. Does he know something the rest of them don’t?  Does he have some secret advantage or leverage? Is he somehow always one step ahead?

This is where thing take a very bizarre turn. You’re all familiar no doubt with the strange coincidences and predictions surrounding the trump presidency: The Simpsons cartoon, the Back To The Future movie sequel, the Heavy Metal comic book story, are three examples that spring to mind. 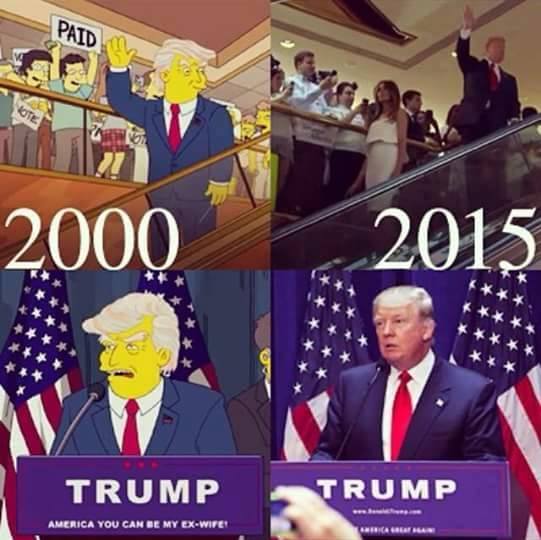 And we here at Uncensored became intrigued by the strange coincidences within the novels of Ingersoll Lockwood.

And how did Trump know about the impending North Korea situation, the 9-11 terror attacks (even naming Bin Laden), and mentions “Pizzagate” in relation to Podesta, years before it happened?

It gets stranger. Maybe you’ve seen some of the YouTube presentations, or, like me, you saw the headings and gave ’em a pass: “Is Trump A Time Traveller?”….give me a break! Then I decided to put aside my scepticism for a moment and take a look.

So, a link between the Trump family and Tesla. Allegedly, Donald acquires Tesla’s papers, including plans for a “time machine”. Hence all the aforementioned strange coincidences and predictions.

No, I don’t buy it. But nor do I wholly reject it. If Donald Trump can really time travel, then surely he could have achieved more? It seems to me more like he foresaw potential futures and knew that he had to take a certain course in order to prevent the worst from happening. Did he see something about a Hillary presidency and did he then manage to convince Putin that she must never become President? He did say, way back, that he didn’t really want the job, but felt he had to take this path.

Regardless of what one makes of the Trump time travel theory, one can still speculate and ponder: If Hillary had won and Trump lost, would things be better or worse?

Some things don’t require a time machine to figure out!

Wed Sep 6 , 2017
https://www.msn.com/en-nz/news/world/putin-north-koreans-will-eat-grass-for-kims-weapons/ar-AArm52W?li=AAaeXZz&ocid=spartanntp North Korean leader Kim Jong Un would allow his people to “eat grass” before he ever gives up his nuclear and missile defense programs, Russian President Vladimir Putin said Tuesday at a news conference in China. Kim and his military claimed to have tested a hydrogen bomb Sunday, the […]