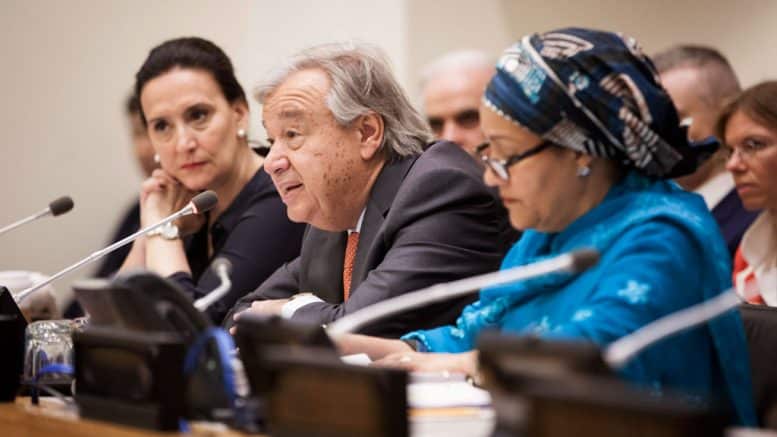 Danger: The Deputy Secretary-General, Amina Mohammed, said that “trillions of dollars need to be mobilized a year by tapping into the savings of citizens around the world…” The financing fix for Sustainable Development is revealed: simply take it from citizens’ saving accounts. Actually, if Sustainable Development is completely established in place of Capitalism/Free Enterprise, private property (including savings) will be wiped out anyway. ⁃ TN Editor

As the high-level week of the United Nations General Assembly gets underway, Secretary-General António Guterres today stressed the role of the UN to help reshape “unproductive and unrewarding” finance and redirect investment to creating a better world for all.

“The choices we make on finance will be critical,” Mr. Guterres told a special event held at the UN Headquarters in New York on financing for global development goals.

“We can choose to bemoan the lack of financing for the 2030 Agenda in a world awash with so much unproductive and unrewarding finance. Or we can grasp the opportunity to reshape finance, according to our urgent, collective needs,” he said. “The choice is clear. Let us invest in the 2030 Agenda and finance a better world for all.”

However, today’s global financial system, which manages some $300 trillion in financial assets, is simply not fit for purpose, the UN chief said, recalling that the Addis Ababa Action Agenda, adopted in 2015 at an international conference in the Ethiopian capital on financing for development, highlights the importance of being innovative in leveraging resources and financing for development.

The UN’s three-part strategy for enhancing its support to financing the 2030 Agenda would help achieve short- and medium-term results, he said.

The Secretary-General said that he will lead UN efforts to ensure that the objectives of the 2030 Agenda are fully reflected in international economic and financial policies by working closely with key inter-governmental platforms, such as the G20.

Second, he will reform the UN development system to strengthen its country teams, and third, he will champion key international initiatives that can harness large-scale changes in financing and financial system development, such as in the fields of digitalization and climate finance and in cooperating with major investment initiatives.

Also addressing the event was Deputy Secretary-General Amina Mohammed, who said that trillions of dollars need to be mobilized a year by tapping into the savings of citizens around the world, official development assistance (ODA), domestic financing and the world’s financial system.

The UN has always been engaged in this financing agenda, with its partners, allies and of course Member States, but “our question is whether we are doing enough, and the answer, in short, is no,” she said, explaining that this event is timely as it highlights progress and opportunities from parts of the UN’s leadership team, key partners such as the World Bank, private sector actors, and Member States.

Satanic Fashion Show Inside a Church at London Fashion Week

Sat Sep 23 , 2017
Source: vigilant citizen Published: September 22, 2017 Turkish designer Dilara Findikoglu’s presented her Spring/Summer 2018 collection at London Fashion Week and it was nothing less than a satanic Black Mass. Indeed, the event took place at the altar of St Andrew Church in London and incorporated heavy occult and satanic symbolism. […]