Hot on the heels of Facebook’s Sean Parker’s concerns about his creation, now the man who came up with the concept of the Web Browser expresses his own concerns about the intrusiveness of emerging Internet technologies (what I refer to as “Data Storage and Patterning” technology):

The web is 28 years old but these days it often appears to have the growing pains of a teenager.
There’s the scourge of fake news, growing pockets of censorship around the world, the fiery debate over net neutrality and more.

When teens get into trouble, you typically talk to the parents. For the web, that is Sir Tim Berners-Lee, a computer scientist who proposed the idea of using a tool called a web browser to visit distinct pages on the internet.

He was recently interviewed at at World Wide Web consortium meeting, and things got interesting, fast. 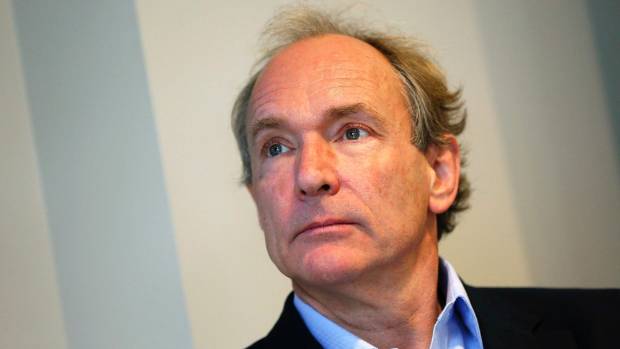 Reuters
Sir Tim Berners-Lee: “We must resist these technologies.”

When asked if he occasionally felt like Dr. Frankenstein, wondering, “What have I wrought?” while watching the unfolding saga of fake news on the web and its implications for democracies. “Yeah, I have,” he replied.

His concerns during the web’s first 25 years focused on expanding access to more people. But now he thinks the web has become as complex and intricate as a human brain-so the tech industry requires a multi-disciplinary approach to “look out for unintended consequences” and study the impact of services as they are introduced to the world.
But too often web companies just plow ahead without understanding the consequences.
He criticised the likes of Google, Facebook and Twitter for creating advertising systems that, for example, incentivised fake-news purveyors.
“They didn’t do that out of malice,” Berners-Lee said. “They did it completely commercially, not even caring about who won the election. But Google gave them money [to do it], and that trained them to think of headlines like, ‘Hillary really wants Trump to win.'”
Berners-Lee was also asked if he was worried that big tech companies have too much power.
He said the giants of the past, like AT&T, AOL and Microsoft, were once considered unassailable, only to be upended by unexpected competitors: “It’s amazing how quickly people can pick stuff up on the internet; it’s also amazing how quickly they can drop it,” he said. That said, he worries that “you can’t imagine having such a strong dominance in these markets without losing out on innovation.”
Turning abroad, we discussed efforts to censor internet content.
Early in the web’s history, there was a belief that “information wants to be free”-that internet users would find ways to route around attempts at censorship. Berners-Lee conceded that thinking was a “a bit simplistic.”
He says there’s “no magic recipe that the internet will be able to solve censorship, so censorship is something we have to protest against.”
Obliquely referencing countries that restrict internet content he said: “Openness is a sign of a strong government. You can be strong in lots of different ways. The ability to be strong enough to allow people to see the alternative views of the opposition is a particular strength which I hope various countries will find.”
Berners-Lee also said it was important for people to be able to own and control their own data and that companies should think twice before assuming it’s a business asset.
“It used to be said that data is the new oil,” he said. “Personally, I think it’s like nuclear fuel. It’s becoming toxic. Two years ago, the question from the board was, ‘How are we monetising the data?’ Now the question is, “How are we protecting ourselves from the damage of this getting out?'”
I asked Berners-Lee if he owned a connected assistant like the Amazon Echo or Google Home.
The answer, he said, is no; he believes that when conversations and queries are recorded in our home and transferred to the cloud, they inevitably become vulnerable to intruders and accessible to prying governments.
Sounding very unlike the web pioneer who created the web nearly three decades ago, he vowed, “We must resist these technologies.”
– Bloomberg

We Don’t Need a Special Counsel to Investigate the Clinton Foundation.....

Wed Nov 15 , 2017
WHAT WE NEED IS A CREDIBLE PROSECUTOR. Republicans, whether in the White House or on Capitol Hill, do not seem to appreciate how much they may be undermining what they say they want — a serious investigation of the Clinton Foundation and such related matters as the Uranium One transaction, […]