These wildfires are getting more extreme every year. Predictably “climate change” is blamed. There are many factors both human-made and natural that probably combine to play a part. But one of the wilder, yet plausible possibilities is the deliberate involvement of Directed Energy weapons. 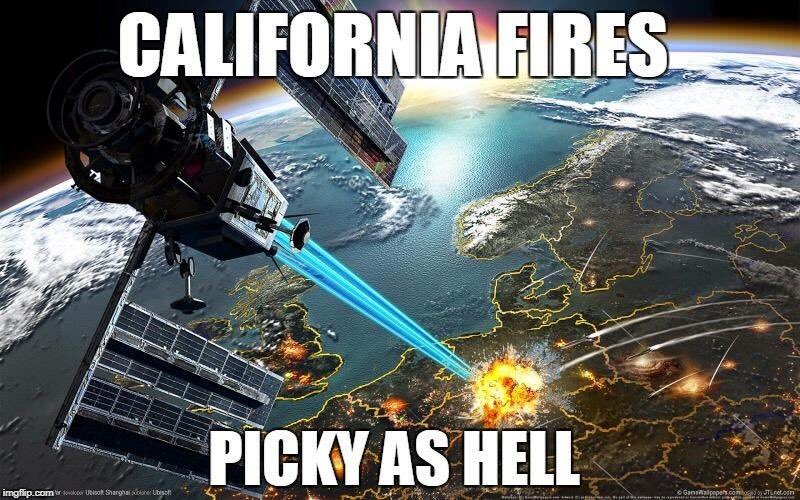 Much as HAARP can generate wild weather events and trigger earthquakes, the Elite Military-Industrial complex has other toys of mayhem and destruction that can be called into play. Watch the vid and evaluate the evidence for yourself: (Note this is from last year, but still applicable)

Subscribe 187K
In science fiction, futuristic soldiers are often shown wielding light emitting weapons. Flash Gordon used a ray gun, Captain Kirk carried a phaser, and Darth Vader brandished a light saber. But, today, the imagined future of science fiction is a reality. The United States is deploying a new generation of weapons that discharge light-wave energy, the same spectrum of energy found in your microwave, or in your TV remote control. They’re called “directed-energy weapons”. Lasers, high-powered microwaves, and particle beams. They claim that this technology is new and that first directed energy weapons are being tested right now, but the fact is that advanced technology is always suppressed from the general public. What is Directed Energy? How do direct energy weapons work? What can these direct energy weapons do?

The Best David Icke Interview Ever!

Fri Aug 3 , 2018
A superb and satisfying interview. Respect to Eamonn for treating David with respect. A very rare thing to see and hear. talkRADIO Published on Jul 26, 2018 Subscribe 16K David Icke joined Eamonn Holmes and Saira Khan to take listeners calls, talk about Donald Trump and explain why he believes […]