“If the state forced a child to be vaccinated and the child had a significant medical reaction and potentially died as a result of that, that would be a huge burden that the state would have put on those parents.” – Former New Zealand Prime Minister John Key
by Emma Fiala via Mintpress 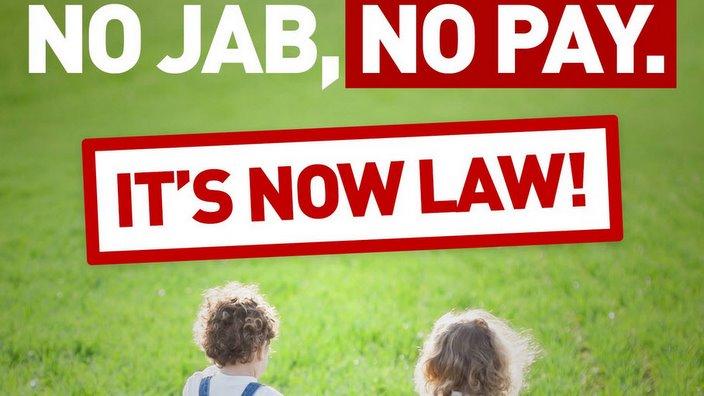 CANBERRA, AUSTRALIA — Australia’s “No Jab, No Pay” policy just got a little stronger, or at least more insistent. Under the previous policy, parents who did not keep their children up to date on vaccinations would miss out on a one-time, end-of-the-year tax benefit called Family Tax Benefit Part A, valued at AU$737. Under the updated policy, those same parents will instead lose AU$28 every two weeks while their child is not up to date.
Australia’s Minister for Social Services, Dan Tehan, said in a statement:
“Immunization is the safest way to protect children from vaccine-preventable diseases. Parents who don’t immunize their children are putting their own kids at risk as well as the children of other people.”
The expanded No Jab, No Pay policy went into effect on July 1, 2018.
While parents will miss out on approximately the same amount of money in the end, the updated policy serves as a more “constant reminder” that the government of Australia wants all children vaccinated, according to Tehan.

The Australian government has been attempting to quell the anti-vaccine movement for years and first introduced the No Jab, No Pay campaign in 2016. Since then, nearly 246,000 families have taken steps to meet the requirements.
Concerns arose after small outbreaks of diseases like measles and whooping cough were blamed on an increase in the percentage of children younger than seven claiming a “conscientious objection” to vaccination. Between December 1999 and December 2014, the proportion of children under seven with a “conscientious objection” rose from 0.23 to 1.77 percent.
Government vaccination campaigns are nothing new in Australia. Back in 1999, vaccination rates for children between the ages of 24 and 27 months hit the lowest level in 17 years. After launching an aggressive education campaign, that same rate rose from 73.6 percent in 1999 to 92.2 percent in 2015. But the Australian government asserted that still wasn’t enough and subsequently launched the No Jab, No Pay policy, spending AU$14 million on free vaccinations in 2017 alone.
Medical exemptions are available both for children at risk of serious harm from vaccines and for children who have natural immunity.
In addition to the No Jab, No Play policy, in some areas of Australia, a “No Jab, No Play” policy has gone into effect. In Queensland, for example, according to the National Centre for Immunisation Research & Surveillance:
Child care services can cancel or refuse enrollment or attendance of children if they are not fully immunised, unless they are undergoing a vaccination catch-up program or have a medical reason not to be vaccinated. Vaccination objection is not a valid exemption. This legislation applies to attendance at long day care, kindergarten, family day care, outside school hours care/vacation care, limited hours care or occasional care.
If an outbreak occurs, unimmunised children may be excluded from child care for a period of time.”
As a result, those abstaining from vaccines in Queensland are reportedly organizing their own childcare services to circumvent the law…

READ THE REST AT MINTPRESS NEWS

Jones Banned: Who's Next?

Wed Aug 8 , 2018
Doesn’t matter what you think of him. What matters is, it happened. How Alex Jones lost his info war Misinformation is fine — but hate speech isn’t By Casey Newton@CaseyNewton Aug 7, 2018, 6:00am EDT On Monday, the bottom dropped out for Alex Jones. After a series of tepid disciplinary […]