The Great Pre-Midterm Purge Has Begun…

Just in time for midterms, Facebook has removed 559 pages and 251 accounts they claim have been spreading misinformation and spam. Several of the pages however – some with millions of followers, were pro-Trump conservatives who had spent years cultivating their followings. 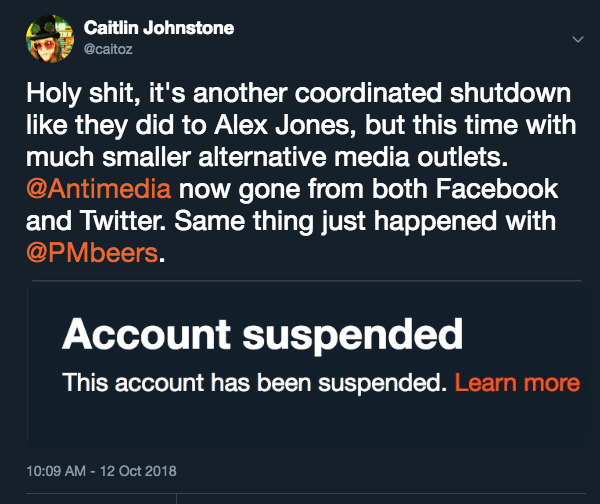 Facebook has unpublished our page
After 5 years of building fans Facebook has officially unpublished our page (3.1 million fans) so we can’t post on it anymore. This is truly an outrage and we are devastated. We will do everything we can to recover our page and fight back. pic.twitter.com/H3AmHTT8Qo
— Free Thought Project (@TFTPROJECT) October 11, 2018

I’ve been memory holed from FaceBook! 350k followers poof gone! There is a dangerous precedent being set here where the big tech companies have appointed themselves as the gate keepers of political thought and opinion! Retweet this if you care about free-speech! #FreeDickspic.twitter.com/LsnZvaJyOL
— Dan Dicks (@DanDicksPFT) October 11, 2018

Our @facebook page with over 2.1 million followers has been unpublished, along with over 800 other pages and accounts. The purge of alt-media is upon us. pic.twitter.com/6Q2oswVpBI
— Anti-Media (@AntiMedia) October 11, 2018

Facebook claims that “domestic actors” have been creating “fake pages and accounts to attract people with shocking political news,” reports Bloomberg.
“The people behind the activity also post the same clickbait posts in dozens of Facebook Groups, often hundreds of times in a short period, to drum up traffic for their websites,” Facebook said in a Thursday blog post. “And they often use their fake accounts to generate fake likes and shares. This artificially inflates engagement for their inauthentic pages and the posts they share, misleading people about their popularity and improving their ranking in news feed.”

Some pages Facebook removed had large followings of real and fake accounts. Nation in Distress, a conservative meme page, was followed by more than 3 million people, according to the Internet Archive, which stores historical versions of websites and other online content. –Bloomberg
Facebook has removed “559 Pages and 251 accounts” in the US “that have consistently broken our rules against spam and coordinated inauthentic behavior.” They include:
-Nation in Distress
-Reasonable People Unite
-The Resistance
-Reverb Press
-Right Wing News
-Snowflakes
— Craig Silverman (@CraigSilverman) October 11, 2018

That said, not all of the accounts with large followings were conservative; Reverb Press, for example, had over 700,000 followers and constantly attacked President Trump and Republicans, who they referred to as “cheating scumbags.”

A third left-leaning page, Reasonable People Unite, posted a screen shot of a Twitter user who said, “Somewhere in America, a teenage girl is listening to her parents defend Brett Kavanaugh and she is thinking to herself, if something like that happens to me, I have nowhere to go.” –WaPo

First they came for Alex Jones and now @facebook has taken down @DanDicksPFT Press For Truth page! This is insanity, Dan has been one of the most inspirational and rational independent journalists of our era! @DewsNewz @PrisonPlanet @LeighStewy @PressForTruth pic.twitter.com/EA5WatAHUI
— Jason Bermas (@JasonBermas) October 11, 2018

Facebook purges hundreds of political pages, some alt-media with millions of followers

Facebook is again being called out for purging political accounts too far left and right of center, after it removed more than 800 pages just in time for the 2018 midterm elections. Some had millions of followers…. 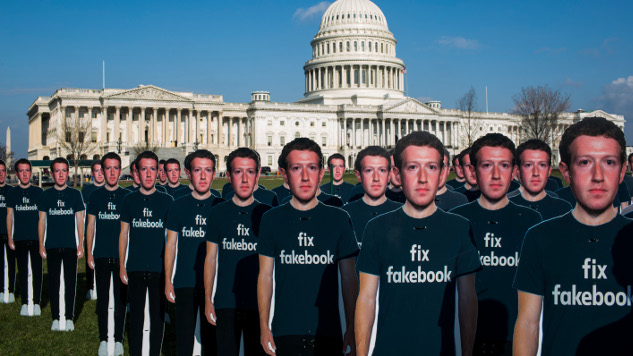 Sun Oct 14 , 2018
The internet; The Social Network, where is it all heading? Not so long ago none of this even existed, now we can’t live without it! Take a look at the increasing and often alarming “electronic book burning” purges going on, as if freedom of thought and protest, and even questioning […]