Unless you’ve been sleepwalking through the past few weeks, you’ll have noticed some crazy weather and earth changes, of course the latest in an increasingly serious series of wildfires in California being prominent in the MSM. SOTT does an informative roundup of  worldwide wild weather, and their own take on why it’s all happening (you may have other theories, “think for yourself”):

At the risk of sounding repetitive, October this year was, yet again, a month of major and destructive amounts of precipitation across the globe. At this point, the intensity and frequency of rainfall (often including hail) in so many places is getting a little worrying. From Asia to the Americas to Africa, Europe and the Middle East, towns, cities and villages in all these areas experienced massive downpours in just a few hours that destroyed property and took lives. 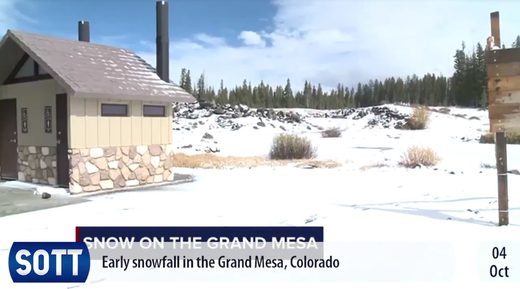 Winter also arrived early this month in many places, with the European Alps, the Canadian and US Rockies (including further south in Arizona), China, South Korea, Pakistan and India all receiving unusually large amounts of the white stuff. As usual, there were meteorites/fireballs aplenty and, of course, the increasingly common sinkholes made their appearance, in one instance killing two people. For residents of Florida, October was marked by the arrival of Hurricane Michael with 155mph (250kmph) winds while Cyclone Titli hit the Indian coast leaving 17 people dead and 300,000 evacuated. All in all, it was yet another month of ‘climate’ madness on the big blue marble – matched only, you might say, by the political madness that appears to have taken hold of the minds of many people.

Watch our summary below:

Or check it out on Sott.net’s Vimeo channel:
Music used: ‘Escape from the Temple’ by Per Kiilstofte. Licensed under Creative Commons Attribution 4.0 International

To understand what’s going on, check out our book explaining how all these events are part of a natural climate shift, and why it’s taking place now: Earth Changes and the Human-Cosmic Connection.

Brexit Blow For May

Thu Nov 15 , 2018
British Prime Minister Theresa May was dealt a severe blow on Thursday when her Brexit secretary and another minister quit, striking at the heart of a draft divorce deal with the EU she is battling to sell to her party, parliament and the country. LONDON, Nov 15 (Reuters) – Just […]