China used to be one of the world’s leading naval powers. 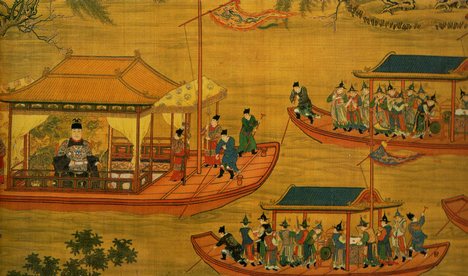 But in the 1400’s, the isolationist Ming Dynasty ordered China’s large fleets dismantled and its ports closed.

when they were quickly demolished by the Imperial Japanese Navy.

Now, China is back as a rising sea power.

We are still so steeped in Cold War thinking

is causing shock and deep consternation in Washington

even though this development was perfectly predictable and inevitable.

Ever since 1945, the North Pacific has been pretty much America’s “mare nostrum.”

The powerful US 7th Fleet policed the region’s waters, ready to intervene along the coasts of China, Taiwan, Korea and Japan.

Both the Korean War and Vietnam War were supported by the 7th Fleet’s carrier battle groups and surface warships.

Our imperial mode of thinking says it’s right and normal

for the US Navy to enforce and protect America’s maritime interests,

But when another power seeks to do the same

– in this case China,

which now imports more oil by sea than the US

– cries of alarm are sounded.

It was precisely this type of thinking that led to Anglo-German naval rivalry,

a key factor in unleashing World War I.

Now the US and India are raising alarms about China’s still modest blue water navy.

Wed Jan 12 , 2011
Boycott Divestment and Sanctions is a two-edged sword, bringing relief to starving Gazans, and starvation to the occupier. It was almost exactly two years ago that Israel launched its invasion of Gaza, carrying out 22 days of murder and mayhem, killing 1400 and leaving 5400 civilians crippled for life.