Putin, who America desperately needs as Russian leader, is now under attack to be replaced by Zhirinovsky. If you thought you had seen hawks and war mongers in contemporary history, you have not seen the crews Trump has just unleashed in Russia.

His one act of lunacy has actually woken The Bear.

Trump is delivering slappies in Syria while making a face, while hardcore to the death Russia is screaming. Stalingrad, Zhukov, and The 1945 Battle of Berlin. And certainly American activities in: Crimea, Ukraine, Georgia, Belarus, Chechnya, and Ossetia, alone do not look good on America’s track record.

The Bear Will March if Putin is replaced. America will be hit, and it will never forget it. Europe will be subsumed again. The USN will be destroyed by Russia and China.

America has just detected Russian submarines along its coasts. I have previously written of the Russian bases at Santa Clara and Lourdes (Cuba). And of Russian TU nuclear bomber overflights of Guam and The American West Coast.

Zhirinovsky just reminded The Russian Duma, that America has lost every single war it has ever prosecuted since 1945.

The former British ambassador to Syria, Peter Ford, in a BBC interview, just stated The American created Jihadists have now been enlived to stage further False Flag Chemical Attacks, based on what they have just seen of The West being led by the gullibility of The MSM.

Tillerson immediately scheduled a flight to Moscow to meet Putin. Putin’s office responded by advising that there will be no meeting with Putin. He can talk to Lavrov if he wants. Previously Tillerson of Exxon-Mobil was always well received in Russia. Putin had even met with the grand liar Kerry. But Tillerson has been advised that he cannot be entered into Putin’s calendar. When Tillerson’s representatives mentioned that Syria was to be discussed, they were advised by Putin’s representatives; that Syria is now ‘Off the table’.

America has moved The USS Vinson Carrier Group One from Singapore to The Korean Peninsula. In that group there are three junk Aegis vessels; two destroyers and one cruiser. Remember the Russian EMP disarming of The USS Donald Cook, and the joke played on The USS Porter?

The USS Vinson was the one involved in The Osama bin Laden Capture Lie. It carries just 90 aircraft; which will have nowhere to land if China takes the initiative. 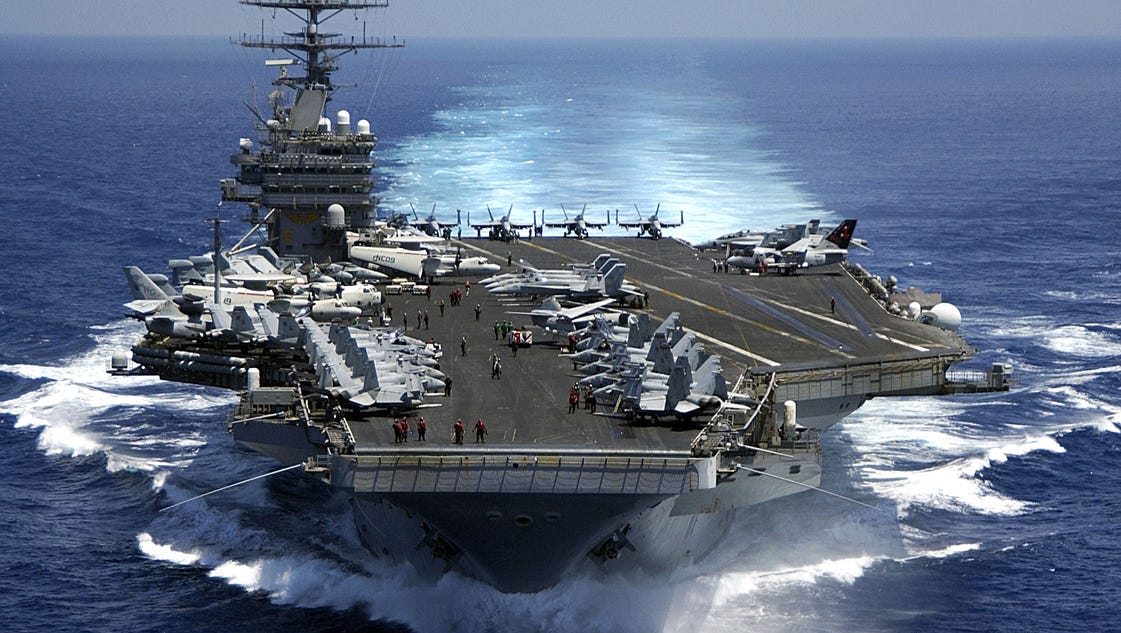 Mattis has come out making noises to the effect that the ill thought Syrian attack has caused 20% damage to The Syrian Air Force. However he determined that gymnastic concerning refuelling and ammunition supplies, he didn’t factor in the reality of an Act of War by America, and the fact that Russia has already rectified what he claims in his nonsense narrative.

Iran’s Rouhani; who can strangle America with one move in The Strait of Hormuz; has correctly stated that America is not the world’s leader.

The forthcoming G7 meeting in Italy of Canada, France, Germany, Italy, Japan, Britain, and America, will privately discuss what can be done to alleviate the damage caused by America, while publicly giving full support to the current village idiot. The European states at issue are flooded by Islamists of various drivings, courtesy of America.

The radicals are enlived. Britain and France will no longer need to stage false flags to maintain focus. Unless they distance from America, they appear to be heading down a nasty path.

One thought on “Has Trump Crossed The Line? By G Squared”

Thu Apr 13 , 2017
As an interesting diversion from current events, readers might be interested in this fascinating interview with one of the most extraordinary minds of the Twentieth Century: Architect, socialist and maverick, Frank Lloyd Wright. Wright was 88 when this interview took place in the 1950s and clearly still possessed a sharp […]