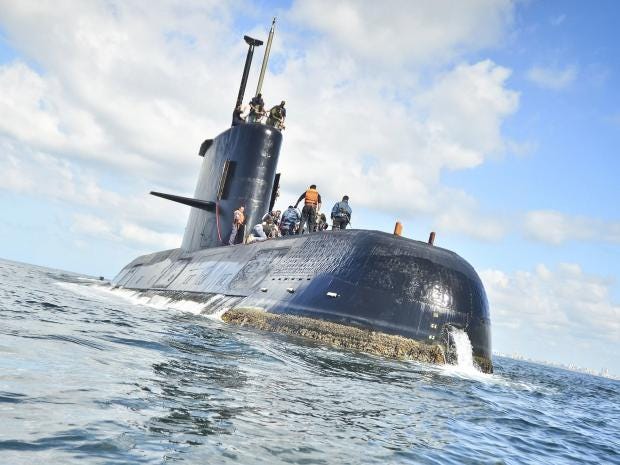 Argentina’s defense ministry said seven failed “satellite calls” that it believes came from a missing naval submarine were detected on Saturday in a likely sign the crew of 44 was trying to reestablish contact.
The calls, believed to be from the ARA San Juan submarine, lasted between four and 36 seconds in the late morning and early afternoon, the ministry said in an emailed statement. The ministry said it was working on tracing the location with an unnamed U.S. company specialized in satellite communications.

Argentina’s Navy said Saturday it was ramping up the search for a submarine that hadn’t been heard from in three days, and at least six other nations said they would join in the effort.
Navy spokesman Enrique Balbi said that the area being searched off the country’s southern Atlantic coast has been doubled as concerns about the 44 crew members grew.
“We are not discounting any hypothesis,” Balbi said. Possibilities could include “a problem with communications” or with its power system, he said.
Authorities last had contact with the German-built diesel-electric sub, the ARA San Juan, on Wednesday as it was on a voyage from the extreme southern port of Ushuaia to Mar del Plata.
President Mauricio Macri said in a tweet that the country will use “all resources national and international that are necessary to find the submarine.”

This missing sub seems to be making big waves in the mainstream news. Is there more to the picture than meets the eye? Pays to keep an ear to the ground on these things.

"Freedom Frenzy" Grips Zimbabwe, But What Happens Next?

Sun Nov 19 , 2017
President Robert Mugabe is under intense pressure to resign. But nothing has been heard from the 93-year-old since he appeared at a university graduation on Friday. “We want to tell President Mugabe, it is time to rest,” Chipo tells us as she continues celebrating with her friends near Freedom Square. […]