We have been advised by US Military and Government Actors, including Lt.Gen.Kenneth McKenzie Jr., Director of The Joint Chiefs of Staff; that on 14/4/2018, a combined American, British and French military force, using air and sea platforms based in The Red Sea, The Persian Gulf, and The East Mediterranean, fired 105 missiles at three Chemical Weapons facilities in Syria and destroyed them.
This being in response to a CW strike at Douma of 7/4/2018. Allegedly conducted by The Syrian Government, which American theatre rhetoric now refers to as The Syrian Regime.
Unfortunately this ‘Official Version of Events’ delivers more questions than answers.
If the alleged first CW Attack was on 21/8/2013, in Ghouta and we are now advised that America was aware of these facilities in 2012, why were they not struck before? The argument that Russia had taken responsibility to remove Assad’s alleged CWs, does not meet with The US allegedly collecting such weapons, placing them on a ship and then dumping them in The Mediterranean. Nor does it gel with the argument that after the Khan Sheikhoun Attack; America would blame Russia for not being vigilant in its alleged responsibiities concerning Assad. None of which being in accord to Russian comments on the matters.
The US Treasury mysteriously came into the picture in 2017 and allegedly ‘sanctioned’ 271 scientists it claimed were researching CWs in Syria, for The SSRC; ‘Responsible for developing and producing non-conventional (whatever that means) weapons and the means to deliver them‘ (does that mean missiles?).
Are we being told that the ‘Sanctions’ had no effect? Surely the theatre of American ‘Sanctions’ as the only action available from the end of dark alleys would have been realised from the days of The Obama Crimean pout?
Gen. McKenzie advised of the destruction of “Fundamental components of the regimes CW infrastructure.” That; “Storage facilities had been successfully hit and there was sustained damage to the CW bunker.”
Then a compounded question arose. It was alleged by America that The Barzeh facility was speciaising in installing CWs on long range missiles and artillery shells. And that all this came from an American Intel Report.
Now we know how accurate American Intel is. Colin Powell as Chairman of The Joint Chiefs of Staff delivered his monumental lie of WMDs in Iraq to The UNSC. When this lie began to fall apart, he claimed it was what was delivered to him by American Intel. After The Chilcot Report, which exposed a lot more, and the great Powell was seriously on a limb; he backed away and admitted the 5/2/2013 lie in 2015. 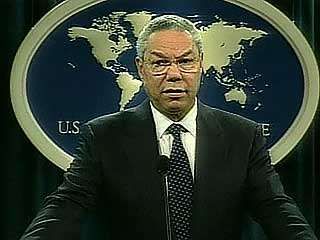 The follow-on American propaganda delivered that The Him Shinshar CW bunker was a storage site that contained both a CW equipment storage facillity and an important command post. And all this after The OPCW Reports. Had American ‘Experts’ inspected and noted the contents of the alleged facilities they were going to strike.
An ‘important command post’ sounds very impressive. As indeed Britain and France joining in the turkey shoot, gives the impression of an ‘International’ response to a world outrage concerning The Syrian ‘Regime’ and The ‘Animal’ Assad, gassing his own civilian populations whom he is defending against invading forces.
Russia had a communications facility established in Syria, that would co-ordinate the military aircraft of Russia and America. The latter allegedly posturing to strike rebel targets. Its IS factions of which it had lost control from Iraq. When the False Flag of Khan Sheikhoun and The War Crime of Shayrat were committed by America, together with other offences, Russia switched off America’s access to the communications system it had established. As such, there was a heightened risk of American military Aircraft colliding with Russian or indeed with themselves. This strange situation concerning American military aircraft, effectively grounded The USAF in Syria. The risk was also present that any ‘unapproved’ aircraft over Syria would be automatically targetted and downed by the missile system installed by Russia. Missiles subsequently fired by Israel, and those of the 14/4/2018 Attack, not fired from naval platforms, were fired from Lebanese airspace. The pigs overhead began flapping even more furiously when McKenzie advised that; “The objectives were accomplished without material interference from Syria”.
He went into Pinocchio Mode when he read; “We are confident that all our missiles reached their targets at the end of the strike mission, and all our aircraft safely returned to their bases“. He added that; “More than 40 surface-to-air missiles were launched by Syrian Government Forces. Mostly after the last impact of our strike was over. Likely most were fired without guidance.”
So The Syrian Military did not see the great strike occurring. All their missiles struck their targets. Mission Accomplished. The Syrians were firing missiles after we had left, and were firing missiles blind by trigger.
Firstly ALL missiles are on guidance. They are not a random shot from a small arm. How was he aware how many were fired, and what happened to them? Did they strike civilian targets in Syria? Or was this narrative the exact same as the whole fiction? Were the alleged satellite ‘Before and After’ images correct or manufactured?
Were the Russian satellite images of the two Yatsenyuk ordered fighters firing two missiles into MH-17, then returning to Kiev, correct? Were the Russian satellite images of The 9/11 False Flag correct?
They keep prodding and the peaceful world can only hope. The Bear run amok will not easily return to its slumber, once stirred.

Throwing stones at Russian Missiles and military technology, and Chinese ground forces, is beyond insanity.
We were further nauseated by The Three Stooges plus one; “Took the heart out of The Syrian Government’s (this time The Government not The Regime) CW capability. There is still a residual element (to cover further American False Flags) of The Syrian Program that’s out there. I’m not going to say that they’re not going to continue to conduct a Chemical attack in the future. I suspect however they’ll think long and hard about it”.
Clearly we are dealing with far more than the deluded. As nothing was learnt from the vanquishing of The Korean War that led to the vanquishing of The Vietnam War. Nothing has been learnt by the multitude of displays that have clearly demonstrated The US Military as being incapable of any legitimate adversary.
Even from The Operational Pause of The 7th. Fleet, the return to barracks of Jade Helm, and the admission that The American Missile System has been inoperable from 1972.
The insurmountable self-esteem, and belief of the lie of Full Spectrum Dominance, and even Empire are not only absurd, but tragic. Despite the fact that continental America is safely far away from the areas of the world it uses as a toilet, it still exposes its domestic population, as well as those of its vassal states.
The Stooges targetted Syrian military airfields, and disused industrial and research facilities (unrelated to CWs or BWs). But they also targetted civilan facilities. They launched 101 missiles in total. If the 105 number is correct, then 4 did not take flight. Which again confirms the dud Tomahawks that were used in The prior attack of 7/4/2017. 98 were initially claimed as fired, later adjusted to 59. Of the 39 that took to air, most were shot down or were dropped by satellite. The USS Ross and USS Porter were disabled. The damage at Shayrat was negligable.
It seems to be an annual event. Of the 14/4/2018 Attack, 101 of the 105 were fired, 71 were successfully countered and intercepted. 30 reached targets, as below. The problem of using grossly over-priced weaponry, designed as “Fit for Use”, and Planned Obsolescent.
4 Missiles targetted Damascus Civilian International Airport. 12 targetted Dumayr Airbase, all were shot down. 18 targetted Marj Rudayil (Bulay) Airbase, all were shot down. 12 targetted Shayrat Airbase, all were shot down. 9 targetted Mezzeh Military Airbase; all were shot down. 16 targetted Homs Airport, 13 were shot down. 30 targetted facilities related to Syria’s alleged CW programme, at Barzeh and Jaramana, 7 were shot down. These latter facilities were vacant and disused.
The Stooge Attack was in response to the success of The Syrian Armed Forces regaining control of their country and expelling the invading American, proxy and cohort forces. Not as any response to The American False Flag of a Chemical attack.
I suspect that a proportionate price will be paid for The Acts of War perpetrated against Syria on 14/4/2018

One thought on “Syria: More Questions Than Answers!”

North Meets South With Smiles, Handshakes, and an NWO Script!

Sat Apr 28 , 2018
What’s up with the picture? How did this happen? Just another NWO puppet show… By Martin Harris So one can hardly have failed to notice, but for those who hadn’t: “….It was the first time since the Korean War halted in 1953 that a North Korean leader has come to […]