The world is clearly horrified, as it should be. There seems to be no one, even in the msm, making excuses for Israel’s repulsive actions, as this item from the Sydney Morning Herald demonstrates:

Skunk water, sticky foam, sponge grenades and tear gas-spraying drones are among the non-lethal methods Israel has pioneered to quell Palestinian protests.
Given this extensive toolkit, Israel is struggling to explain why its snipers fired enough bullets into Gaza Monday to kill 60 Palestinians and wound about 1200. 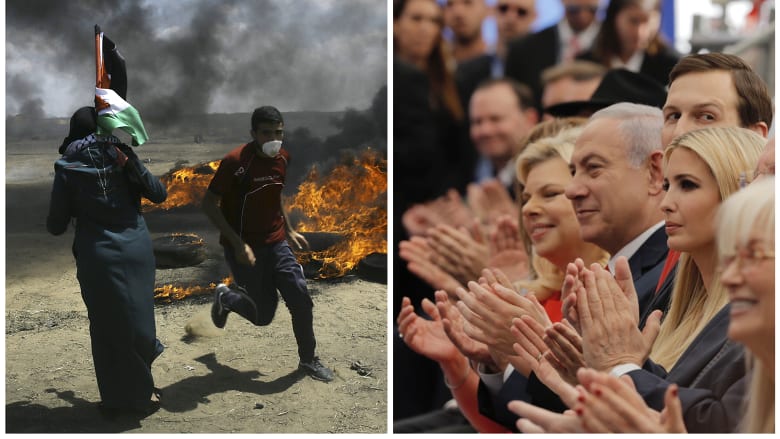 In this photo combination, Palestinians protest near the border of Israel and the Gaza Strip, left, and on the same day dignitaries, from left, Sara Netanyahu, her husband Israeli Prime Minister Benjamin Netanyahu, Jared Kushner and Ivanka Trump, applaud at the opening ceremony of the new US embassy in Jerusalem.
Photo: AP

As with previous conflicts there, Prime Minister Benjamin Netanyahu’s government may face investigations and censure from international legal bodies.
“It’s simply unacceptable and outrageous to use live fire, not as the last resort but as the basic modus operandi for dealing with these demonstrations,” said Amir Gilutz, spokesman for Israeli human rights group Btselem.
Some 40,000 of Gaza’s 2 million residents converged on Israel’s border on May 14 to protest against the transfer of the US embassy from Tel Aviv to Jerusalem, a move they say sets back peace efforts and undermines their bid for statehood. The protest was part of a campaign of weekly demonstrations staged by Gaza’s Hamas. Juxtaposed with the festive mood at the embassy opening, footage from Gaza, showing scores of Palestinians shot by Israeli soldiers, alarmed viewers around the world.

Some youths hurled rocks and petrol bombs at Israeli troops. Others used wire-cutters to try to breach the border fence. Though witnesses say most protesters were unarmed, army footage aired on Israel’s Hadashot News showed a group with with guns, bombs, grenades and wire-cutters trying to cross the fence; all eight were shot dead.
Ambulances and hospitals were overwhelmed, said Ayman Sahabani, chief of surgery at Shifa Hospital in Gaza City. “We’re at 25 times our capacity and our drug inventory is exhausted,” he said. Some reports put the number of hospitalised Palestinians at more than 1300.

Sat May 19 , 2018
We couldn’t let the special day go unreported now could we? And what better way to acknowledge the Royal Wedding than with comment from David Icke? Enough from me, over to Mr. Icke: Forget the Markles – who in their right mind would want to marry into the royal family? […]