And it was only a movie? 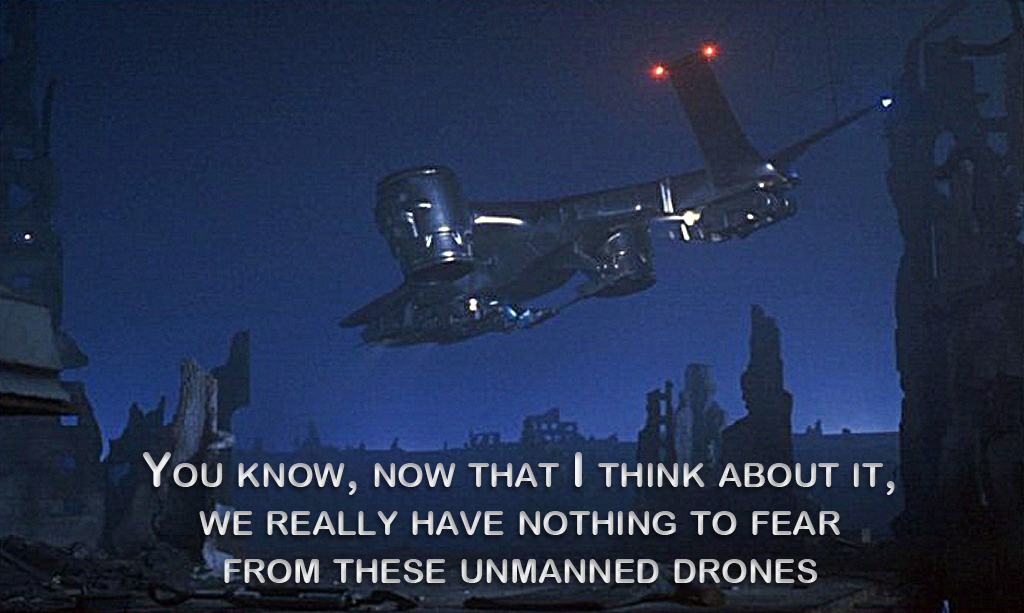 From Andrew Cheetham at Davidicke.com

On May 10, the Defense Advanced Research Projects Agency (DARPA) unveiled the Urban Reconnaissance through Supervised Autonomy (URSA) program, which addresses the issues of reconnaissance, surveillance, and target acquisition within urban environments.

The primary objective of the URSA program is to evaluate the feasibility and effectiveness of blending unmanned aerial systems, sensor technologies, and advanced machine learning algorithms to “enable improved techniques for rapidly discriminating hostile intent and filtering out threats in complex urban environments,” said FedBizOpps.

In other words, the Pentagon is developing a program of high-tech cameras mounted on drones and other robots that monitor cities, which enable identification and discrimination between civilians and terrorists through machine learning computers.

DARPA provides a simple scenario of what a URSA engagement would look like:
“A static sensor located near an overseas military installation detects an individual moving across an urban intersection and towards the installation outside of normal pedestrian pathways. An unmanned aerial system (UAS) equipped with a loudspeaker delivers a warning message. The person is then observed running into a neighboring building. Later, URSA detects an individual emerging from a different door at the opposite end of the building, but confirms it is the same person and sends a different UAS to investigate.

This second UAS determines that the individual has resumed movement toward a restricted area. It releases a nonlethal flash-bang device at a safe distance to ensure the individual attends to the second message and delivers a sterner warning. This second UAS takes video of the subject and determines that the person’s gait and direction are unchanged even when a third UAS flies directly in front of the person and illuminates him with an eye-safe laser dot. URSA then alerts the human supervisor and provides a summary of these observations, warning actions, and the person’s responses and current location.”

The URSA program is a two-phase, 36-month development effort. The first phase of concept/development will begin in the first quarter of FY19 and continue into the second half of FY20. Phase two will start in 3Q20 and continue through 2Q22.’

Read more of your future here …

SAUDI ARABIA IS ABOUT TO BEHEAD 6 SCHOOL GIRLS FOR ACTING INDECENTLY WITH THEIR MALE FRIENDS: Fake News?

Thu May 24 , 2018
Think Trump will intervene? Not with all the wealth that passes between Saudis and the US. But check the Politicofact link and exercise discernment: “Think for yourself”… Western countries are being urged to intervene in a case where 6 young school girls facing execution for acting indecently at a friends […]