MSM signals Symptoms of a Syndrome, not the reality of events. It does not have the ability to report on underlying agendas.

AltMedia that postures that ability has proven incapable or unwilling. It’s imaginings and commercial realisations have destroyed its legitimacy. It produces as a matter of course based on the induced pressures of time, rather than delivering the reality of what it postures.
Only legitimate Independent Media has the ability to correctly report and correctly analyse. And as with this writer, the track record for the past half century plus, has been abundantly clear and irrefutably accurate.
Deep State for example, is only a Symptom. The toxicity of the Power Base we had to have. It helps protect everyone and block the evolution of other ‘Non-Official’ Power Bases, that might do everyone harm. So the story rhymes.
There could be Mafias (as formed by The 18th Amendment that did not disappear by The 21st. Amendment) resembling The Pantsuit Brigade and the many other cabals of self-interest Deep State.
There could be Financial Monopolies posturing deceptions of ‘Stability’, moving into the control of all; including manipulations of Inflation, Market Controls, and Boom and Bust Cycles, as The Fed. and the blackmail and economic devastation of The 16th. Amendment.
‘Unofficial’ Power Bases, might blackmail us, shoot us in the streets, steal our money, steal our homes and all our possessions (IRS; drive-by forfeitures based on buccaneer principles), lock us up (trial by Public Service morality), impoverish us, force poison us pharmaceutically and through our food and water, restrict our movements, smash into our homes in the middle of the night, endanger us, demand to control the thought patterns and health of our children, lie to us, create elite classes of our masters over us, destroy our socio-economic well-being and future, and perform all kinds of evil against us, when all we want is;
‘Someone to love, somewhere to live, somewhere to work and something to hope for.” (Norman Kirk).

The very young of the invaded lands must be destroyed, because they might remember what they saw. The old of the domestic land must be destroyed because they constitute a future economic debt, and might be believed when they say what they have experienced. As the rich get richer and the poor get poorer, only the enslaved, with their terminally obtuse illusions, are of value.
Just as well we have an ‘Official’ Power Base to ‘Protect’ us from the evils of ‘The Unofficial’.
The disease began in England, and has never been eradicated.

The vaccination to guard against it, is the innate and disowned, Rational and Critical Thought.
As Catholicism hid behind The Vulgate Bible, so did the self-serving functionary of The Industry of Law, hide behind Law French. Both eventually exposed as the monopolistic frauds that they were.
In The Roman version of The Theatre, if a victimized were innocent of the concoction, and believed that God existed and would protect them, they were required to plunge their arm into a vat of boiling oil. If they were innocent, God would protect them and they would be unscathed. Otherwise they were guilty as postured.
The herds were salved, the various perpetrators rewarded and the victim left confused but aware of something not being correct. But of course that victim needed to be isolated and not permitted to deliver their reality. Even if capable of ventilation. 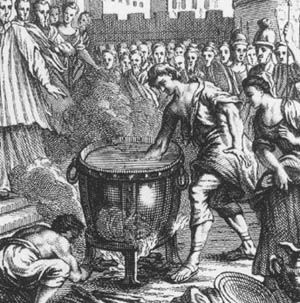 If the plunge method found guilt as concocted. Their Faith in God and Trust in The System brought them two injuries, not just the one. And such has always been the lot of the officially demonized and criminalized. Guilt or Innocence are totally irrelevant. It’s The Theatre that counts. The only problem that arises, is when the herds no longer believe. Very little has changed.
The disease of a polluted Belief System spread through Empire, to Europe, America and to Westernized Nation States.
The abrogation of morality under the guises of  Nationalism, Patriotism, Defence, Protecting The Peoples of The World, Acting on behalf of The Peoples of The World, Democratizing and bringing Humanitarianism, Relief and a better quality of life by Regime Change, Intervention, Incursion, Interference, Invasion, Infiltration, Manipulation, Deception, Violence, Aggression, and even a posture of Morality itself. The constructs to justify the non-visible agendas.
The World does not need a self-anointed policeman, feigning pseudo-empire, and the pretences of a non-existent, bankrupt, military and economic might.
The abhorrent behaviour of The Australian SAS, in Afghanistan, as the insane behaviour of The Sydney, Australia, Police, in The Martin Place Affair, are symptoms of a syndrome derived from the believed pre-eminence of American ‘Training’ and ‘Expertise’. On what planet were these elements derived? The faults lie with the Belief Systems that caused them. Not specifically with the perpetrators.
Being against militarism, wars, engagements, as being against False Flags, Hoaxes and Fake Narratives, is not any negative, or against any Values. It is Pro-Morality, Pro-Humanitarianism, Pro-Democracy, Pro-Truth and Pro-Reality. Being against Lies, Devastations, and Deceptions, is not any support of those evils.
When lies and deceptions become the New Normal Truth, who is at fault?

The Perpetrators or The Believers? Who are the victims as a consequence of that dysfunctional Belief System; The Perpetrators or The Believers?
Maintaining a political construct of incessant foreign enemies, and psychological tensions within nation states, allegedly representing the forces of good in the world, against the concocted forces of evil, is a massive, deceptive, socio-economic enslavement of the people of the alleged Free World.
It’s always interesting how the industry of leaks keeps rational people informed as to what actually occurs in the dark recesses of what is The Enemy Within. Expect false leaks to cover hidden agendas as in the protection of Deep State (e.g. Comey et al), or linked to The Intel Wars (e.g. Snowden, Assange et al).
The postured protectors and representatives of the people: Governments, ‘Elected’ Representatives, and their rogue functionaries and administrations.
The tail that wags the dog.

Non-transparent and unaccountable as the evolved culture demands, the people are not only unable to handle the truth, they are not even entitled to it. The servants became the masters, because they were allowed to become that. We live in a Post Truth Era. It’s the cute way that governments describe and categorize their unacceptable behaviour.
The People of an England passed and pressed for Universal Suffrage, and a daily cheap Press. In due cycle, both those advances were destroyed.
Chronic, habitual, incessant, and psychopathic deceptions. The enemies of The People remain loyal to the their own cabals, and mass media never exposes them. As they entertain with irrelevant stupidities, on cycles that avoid and alter reality, and advance idiocies to central relevance.
The Official Power Base is losing its grip.

Non-Belief is gradually spreading. Only the hardcore believers (unaffected by the “realities” of the concocted world) in America and the Americanized sycophant states, in diminishing numbers, remain addicted to the system of the monopolized self-serving. The dilution that is spreading, is from the immigrants, refugees, and prior victims, who have seen it all before.

Proof Someone Has Been Hiding Our True History

Sat Jun 16 , 2018
Great documentary. well narrated. Must watch! https://youtu.be/i7I9RCvUGgc Disclosed TruthTV Published on May 31, 2018 Our history is not what we think! Over the past few thousand years, someone or something has warped our own history. Our versions of the past has been mistranslated, changed, altered, and skewed to fit someone […]