….That’s quite a range of options!

Here’s some info from around the ‘net: 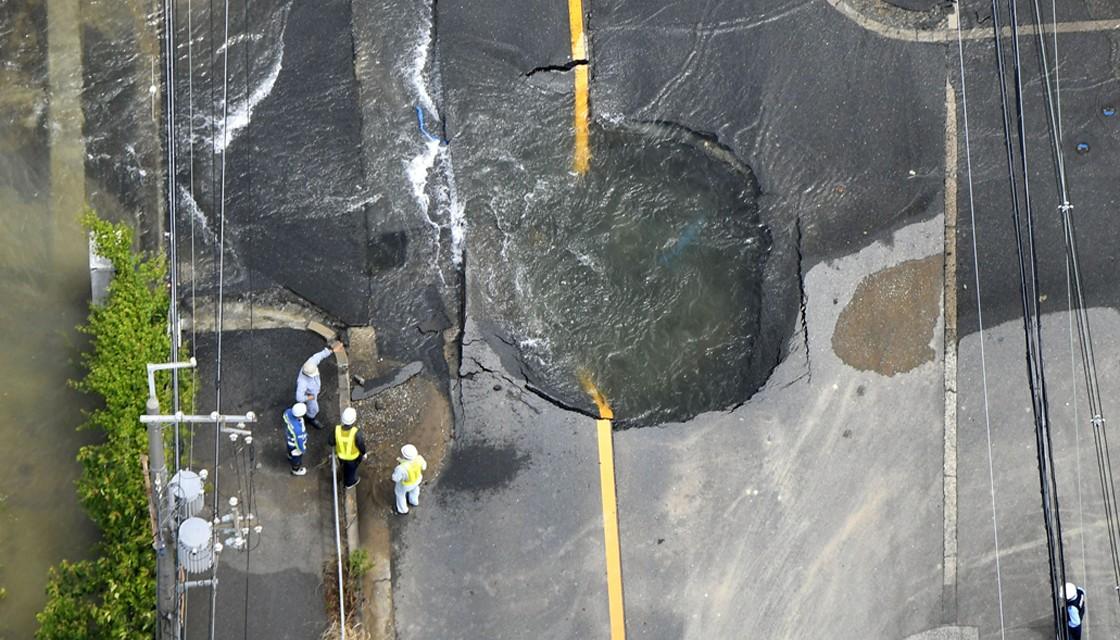 A road in Osaka damaged by the magnitude-6.1 earthquake on Monday. Photo credit: Reuters

Multiple people are dead in Japan after a magnitude-6.1 earthquake struck the southern city of Osaka.
There have been three deaths reported so far, and about 50 or 60 injuries.
Japan’s southern region struck by magnitude-6.1 earthquake
Paul Matheson, a Kiwi lecturer working in Osaka, told RadioLIVE his first thought when the shaking began was to hope that his TV was okay.
“I was more worried about stuff around us than my personal safety.”
He was asleep when the earthquake began at just before 8am (local time).
“We were just about to get started for the day, and that was our alarm clock this morning.”
On the 14th floor of his apartment building, Mr Matheson felt some intense quaking, although he remained calm.
“Being higher up as we are, it tends to magnify the shaking factor. We had our kitchenware scattered all over the floor,” he says.
“This building was built to withstand a magnitude-9 earthquake, but at the time, as we were sitting through the immediate shake-up, I was thinking, ‘Jeez, this feels like it’s not that far off a 9’. It was intense.”
He says there’s “viewable carnage” from his lofty perspective, and described “shock and confusion” throughout the city when the shaking finally stopped, causing significant disruptions to public transport.
“Most of the trains and public transport are out in and around Osaka, so there are people stuck inside trains and train stations trying to get home and get to work,” says Mr Matheson.

However he says most residents are simply “getting on with their day”.
“I think a lot of the newer public buildings here in Japan are built to withstand pretty decent-sized earthquakes, and that shows in the seemingly lack of widespread damage and people getting on with their regular schedules.”
Japanese media has reported that the quake has potentially opened up a new fault line north of Osaka, and that people should be on guard for potential aftershocks for the next week or so.
Newshub.

Iris Seismic Monitor lists the ‘quake as a 5.3:

Mon Jun 18 , 2018
The mainstream media is now admitting that the Walmart stores they claimed closed over “plumbing problems” have since been converted into detention centers. By Rachel Blevins – June 16, 2018 The Free Thought Project When citizens began to ask questions about why Walmart stores were suddenly closing in in southern […]