Hats off to author Gerard Tidmarsh, a well balanced, common sense article from the MSM!

(Personally I think the labour Government is doing the right thing by calling an end to oil exploration in NZ waters. what do you think?)

Is seismic testing a contributory factor in making whales strand?

OPINION: Living close to the world’s worst whale trap of Farewell Spit has given me the opportunity over the years to cover heaps of strandings in Golden Bay.
And to ponder why they happen. More and more I am convinced that seismic testing of sub-seafloor strata for oil around Taranaki is an increasing culprit.
It’s a hard call, postulating why these super-intelligent and acutely sonar-literate creatures find themselves in such a predicament. The common theory has always been that their echo-guidance systems become disorientated in wide, shallow, inshore waters such as Golden Bay. 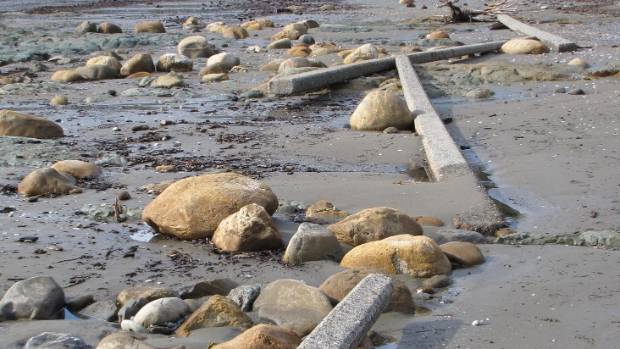 by Gerard Hindmarsh
Before Rangihaeata in Golden Bay was built up, these concrete power poles – which still remain – were once used to secure rotting whales, the old way of dealing with them .

My late friend Buzz Davis of Tukurua spent years in his wheelchair watching whales from the cliff top of his Tukurua home.

After much research he came up with a theory that mineralisation around the two offshore freshwater vents associated with Pupu Springs had the effect of uniquely playing havoc with their depth sounding sonar, causing them to read say 15m depth when the actual was more like 3m or 4m.
He pitched his theory to the the Scripps’ Oceanographic Institute in California, who said his evidence was compelling and they intended coming out to investigate.
Disorientation for whatever reason may explain why whale strandings in Golden Bay have occurred since time immemorial. The low tide on the inside of Farewell Spit can go out 7km on the mudflats on a super low tide, retreating at a fast walking pace.
Early European records and Maori oral history puts pilot whale strandings at roughly five yearly intervals. Pre-european Maori treated them as a big bonus food source while early European settlers eagerly rushed out to render them down for lamp oil. ‘Blackfish’ they were called back then.
This five-yearly pattern continued right up until the mid-1970s when the strandings started closing up to become the annual events around Farewell Spit that they are today.
It is not coincidental that offshore seismic exploration started for oil in the Taranaki Bight in the 1970s, only a short 100km whale swim away from Golden Bay. A coincidence too that there were no strandings last season (summer 2017/18), the first season without seismic testing in a long while.
Over 2000 whale strandings are historically recorded by our National Museum (Te Papa). Historically, most have occurred in just four locations; Farewell Spit, Chatham Islands, Muriwai, and the Mahia Peninsula.
Pilot whales are the most common whales to beach en masse in this country, making up over 90 per cent of all marine mammal strandings around our coastline. Their herd instinct is so strong that pod members will choose to stay with a stranded few.
Has the worst natural whale trap inside Farewell Spit now combined with the worst effects of man, rather seismic oil prospectors, to produce the world’s most deadly whale trap ever?

Tue Jul 3 , 2018
More awakened opinions from the MSM? What is the world coming to! NZ Herald reports on the dangers of blue LED lighting. By: Juha Saarinen Tech writer for NZ Herald. COMMENT: Let me to introduce you to ALAN. The acronym stands for Artificial Light At Night, and there is […]