I nearly cried laughing at this one. As a car enthusiast, I’d say this looks like the notoriously poorly manufactured 70’s era Lada (a car renowned for handling like a dinosaur with it’s backside on fire), that got handed to one of those “reality” car shows who attempt to make old jalopies look cool. It’s my guess that the old Kombi plant was simply put back into service and the 70’s model is retrofitted with an electric motor. Anyhow, here’s the story: 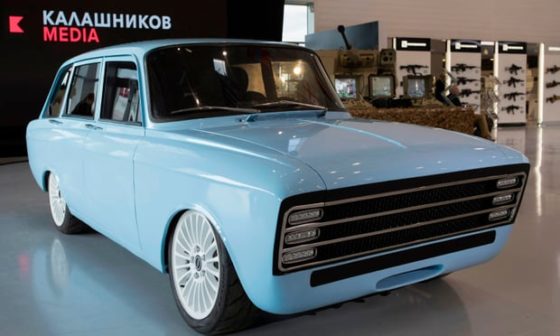 Infamous Russian arms maker Kalashnikov says that it has the “cutting edge” details to take on Elon Musk’s Tesla electric car. Kalashnikov will begin making a retro-looking supercar that the company is certain will compete with the Tesla.
Kalashnikov, best known for its AK-47 rifle, has been inspired by a rare 1970s car model, saying the technology will rival Elon Musk’s Tesla. On Thursday, Kalashnikov presented the retro-looking pale blue prototype, the CV-1, at a defense expo outside Moscow, according to The Guardian. The vehicle can travel 217 miles (350km) on one charge.
“This technology will let us stand in the ranks of global electric car producers such as Tesla and be their competitor,” RIA-Novosti quoted the Kalashnikov press office as saying. “We were inspired by the experience of global market leaders in developing our concept.” The look of the new car was inspired by a Soviet hatchback model developed in the 1970s called “Izh-Kombi”, according to a statement on the Kalashnikov website…

And if you were wondering, this is what the base vehicle looked like in it’s day: Sun Sep 2 , 2018
Is this the real “2001” monolith? (it was a pyramid in the original story) or just a process flaw? Interesting synchronicity of timing considering my current researches: Mysterious structure on the Moon Marcelo Irazusta Published on Aug 27, 2018 A strange elevation of hundreds of meters in the middle of […]