Jair Bolsonaro: get accustomed to this guy’s face. He may be around for a long time. 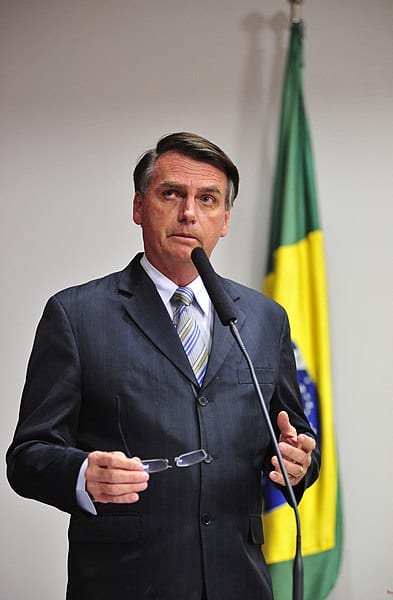 HELP ENLIGHTEN YOUR FELLOWS. BE SURE TO PASS THIS ON. SURVIVAL DEPENDS ON IT.
By Miguel Andrade, wsws.org

Brazil’s shift to the right bodes ill for all nations leaning left, especially Venezuela.Brazil’s presidential run-off election Sunday confirmed what had been anticipated in the first round vote earlier this month and by subsequent electoral polls, with the election of the fascistic reserve Army captain and seven-term federal representative for the state of Rio de Janeiro, Jair Bolsonaro, as president.

Bolsonaro won 58 million votes, or 55 percent of the total, against 47 million, or 45 percent, for Workers Party (PT) candidate Fernando Haddad. The run-off also saw a repeat of the record abstention and spoiled ballots of the first round, with over 40 million out of a total of 146 million adults able to vote choosing not to cast a ballot for either candidate.
The election of Bolsonaro, an open defender of the US-backed, 21-year military dictatorship that ruled Brazil until 1985, and of its murderous and barbaric repression, marks a thorough-going breakdown of the regime of civilian bourgeois democratic rule that emerged in Brazil after the military ceded power.
It also represents a shipwreck for all of the parties that previously held power, first and foremost the PT, which served as the preferred instrument of rule for the Brazilian bourgeoisie for 13 years. Also decimated was the party that emerged out of the former legal opposition to the dictatorship, the Brazilian Democratic Movement (MDB), and the country’s former main right-wing party, the Brazilian Social Democracy Party (PSDB). The first round had already seen the Congressional elections cut both the PSDB’s and MDB’s caucuses in half, and a drop of 20 percent in the number of seats held by the PT…More At Source

Out Of The Frying Pan: Trump, America and the Chinese NWO Agenda

Sat Nov 3 , 2018
Trump. Love him or hate him, agree with him or not, it’s my opinion that he’s essentially doing what he said he would right from the start. But was does that really mean? by Martin Harris The famous Border wall is now at last brought into the spotlight, the US […]