On November 26, the Ukraine Armed Forces released the radio communication between Russian border guard ships and operations duty officers of the Russian Navy.

The Ukrainian General Staff alleged that the radio interception is “an evidence of purposeful aggressive escalation of the situation (in the Black and Azov seas) which was ordered by military and military-political leadership of the Russian Federation”.

The transcript of the intercepted communications with SF comments is below:

0:05
This is Lt. Colonel Sharapov
Now, I will pass the radio to the commander, this is Don [PSKR Don – the coast guard ship]
Halo
Shatohin, yes, Michalych
So, I run foul of it second time. I damaged it board little bit along the ship feed. There are the thoughts to kick [fuck] warships [gun boats], not the tug. They will definitely stop then. Military [ships] are maneuverable. They began to maneuver quickly.
[SF: the Russian coast guard is concerned by Ukrainian gunboats because they are armed, maneuverable and pose a threat]
HINT: to run foul of a ship – to use the hull of your ship to stop or damage another ship.
0:29
Michalych, the order from the border service to kick them, ram them to damage, fucking, all of them.
0:38
This is the operations group, Captain Basov, Kerch. Moscow wants to clarify. Who did run foul of the ship? [SF: Moscow is concerned and is acting in response to actions of the Ukrainian naval group]
PSKR Don.
PSKR Don. On whom?
A947
A947. Got it. Provide the coordinates. Provide the coordinates where the run foul took place and you are now located.
1:03
The first run foul – 44°56’0″N 36°30’8″E. Time – 7:35. The second – 44°56’0″N 36°30’5″E. Time – 7:44. [SF: These coordinates show that the encounter took place within Russian territorial waters]
No more run fouls? What are your coordinates?
44°58’7″N 36°30’4″E 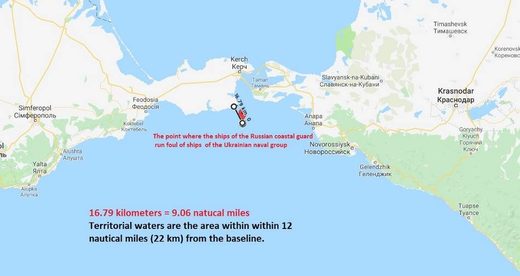 1:50
We can all together – four of us – to kick one and then the second one.
I’m trying but he’s maneuvering. He has got that he’s maneuverable and when I’m approaching him, he’s moving away.
2:01
We should kick them. We should kick them, fuck. Medvedev is in panic, shouting. I feel that the president monitors all this shit.
I know. I understand. There are some attempts.
Fuck, lets him into the propeller-rudder, to damage something fuck. Have you tried to hit him by the ship prow?
I’ve tried. But he does not let me to come close.
Are you trying to flush him by the water fall from your gun carriage?
Not, it does not work.
2:25
We have a collision with Izumrud, serious. [SF: the collision between ships of the Russian Coast Guard]
Between our guard ships?
Yes.
2:32
We will be in all reports.
So, who would say that will not be fired?
2:36
Michalych, look, 10 guys with cool physical skills are coming.
Ok.
They will come to me from above in about 50 mins, maybe in an hour.
Ok.
Could we take them onboard from Zavetnoe, or from somewhere else, by your boat?
No, it’s too shallow there.
2:59
Sharapov. What orders did you get right now or previously? [SF: once again it becomes clear that Moscow is concerned and is not seeking an armed clash]
Shein contacted me, but I would like to clarify: he said to block them, at least the tug. But I’m thinking from where to block? From the northern direction or from the south – out of the territorial waters? [SF: the communication clearly says that the Ukrainian naval group is inside Russian territorial waters]
The leaving route.
The leaving route?
Yes.
Wow. We will have to speed up and catch them. They are moving at speed of 7 knots. We are following them.
3:33
Michalych. You were great, you had a great video and your emotions were really realistic. They show you on TV.
Come on.
I’m serious.
You did not see our damages. Shit.
3:49
I’m working with the tug. The tug stopped, but there are people armed with machine guns. [SF: This means that Ukrainian servicemembers were armed and prepared to open fire]
The tug stopped,. People are armed with machine guns.
Right.
Got it.
3:59
Kerch, Captain Basov, the operations group. Who did employ weapons, open warning fire?
PSKR Izumrud [the Russian coast guard ship].
Izumrud, right?
4:09
I cannot contact Izumrud. There is a mess in the radio communications. Those screaming… the Ukrainians are sinking or what is happening there indeed? [SF: they refer to this ]
Did he shoot them? Wow.
Yes, halo. One second.
I got it.

Later, the Youtube channel of General Staff of the Armed Forces of Ukraine released an English version of the radio interception. It’s entitled “Radio communication between the Russian leadership and border guard ships” and also can be found on Youtube.

It’s important to note that this translation is misleading and the meaning of the communication between Russian border guard ships and operations duty officers of the Russian Navy was changed.

The communication record also includes “Medvedev is in panic, shouting” part. Some mainstream media already started speculating that this is Russian Prime Minister Dmitry Medvedev. However, Medevedev is a common surname in Russia and the officers are likely referring to some local commander.

The radio communications released by the Ukrainian side confirm the position of the Russian side on the incident. It confirms that the encounter took place within Russian territorial waters, Ukrainian ships were not responding to requests to stop and were performing dangerous maneuvers. The Russian side was acting in response to actions of the Ukrainian naval group and was seeking to restore security in its territorial waters.

The most interesting thing is that the Ukrainian side was capable of intercepting some communications between Russian officers during the incident. Considering the facts included in the communication, it’s highly likely that the leak of this radio communication was preplanned and organized by the Russian Federal Security Service…