… like ‘how much money flows out of the country everyday ‘

&  financial discussions could finally include statements such as:

‘Should most New Zealandic banks be owned by Australia, anyway?’

But until then, here’s a sharp lesson that’s probably worth learning about money and history and such. 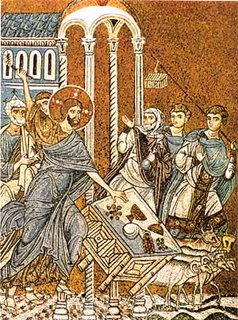 In XVIth century England people who had gold would deposit it with goldsmiths for safekeeping. In exchange they got a signed receipt guaranteeing that they could retrieve it. The value assigned to that note backed by the gold in the goldsmith’s vault made it possible for one to use it in payment.

That means if A deposited £10 worth of gold and had in his possession a receipt he could settle his debt with it. That receipt, actually a promissory note, became money. The person who took it in payment could either use it as is, or at some later point retrieve the gold in the goldsmith’s keeping.

At the same time B borrows £10 worth of gold from the goldsmith but receives a promissory note. He settles his debt to C with that note. Now there are two notes in circulation for one amount of gold. The goldsmith being smart realizes that these notes can actually be in circulation for quite some time, several years even. He issues further notes knowing that all claims would not have to be honored at the same time.

According to contemporary economical calculations he can safely lend at least ten times the amounts deposited. If there is a run of two or more people who suddenly wish to retrieve their gold he can also rely on the fact that he has debtors who owe him gold, although they originally received nothing but a piece of paper. They have to pay him in gold. And should they default he could seize whatever possessions they had, sell these, buy gold and settle the claims. I might add that the goldsmith of course lent out promissory notes for non-existent gold at interest.

Today’s banks do the same:

“Because of the ‘fractional’ reserve system, banks, as a whole, can expand our money supply several times, by making loans and investments”

Simply put every loan given is a deposit. You go to the bank, ask for a loan of say $1000 and they open and account for you to that amount. If you ask for it in cash to settle a debt someone else will eventually deposit that amount. You of course still owe your bank that money, which was created out of nothing the moment you opened your mouth. The money created is debt to which they add interest.

It’s a scam. But, does it bother you?

The West's Moral Failure Over Georgia

Fri Aug 7 , 2009
[ … reminds me of a similar more recent war crime that our Government utterly failed to bat an eyelid over … ] guardian.co.uk, Thursday 6 August 2009 10.00 BST One year ago, Georgia‘s leaders ordered a military attack on unarmed civilians in South Ossetia. By any common understanding this […]