More updates and Links from Jeff Wefferson in Hawai’i as Volcanic and tectonic activity continues.

1) PHILOSOPHY
“the explanation of phenomena by the purpose they serve rather than by postulated causes.”
2) THEOLOGY
“the doctrine of design and purpose in the material world.” 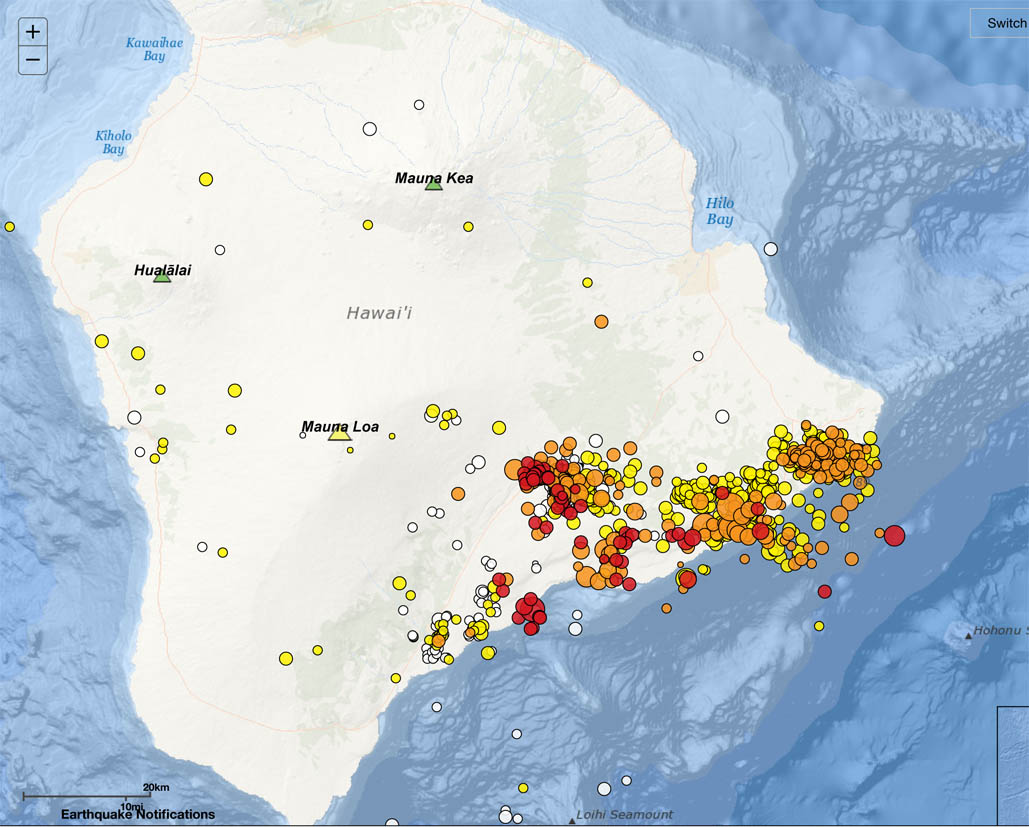 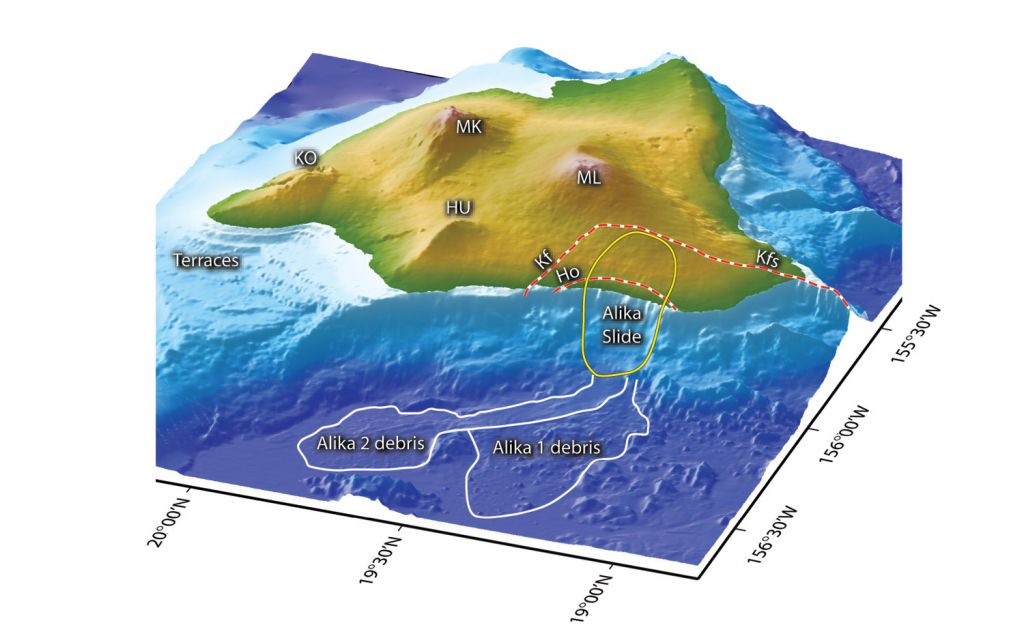 “HAWAI’IAN VOLCANOS UPDATE: REPORT FROM ‘GROUND ZERO’
https://rachels-carson-of-today.blogspot.co.nz/2018/05/hawaiian-volcanos-update-report-from.html
I have found myself using words like ‘unbelievable’ and ‘freaky’ and ‘exciting’ a lot lately, to describe my responses to being here now; ‘sad’ and ‘challenging’, to describe the sudden new realities being faced by around 1700 people who have had to evacuate their homes, not knowing when and/or if they can ever go back and if so what might be there; and now creeping in are words like ‘foreboding’ and ‘ominous’, as I have more time to take it all in, brush up on the leading edge of tectonic vulcanology and relate it all to the ‘big picture’. It’s interesting observing the activity of my mind since the big stuff started happening, a swirling maelstrom of nature lover, geo-physical warfare educator and activist, and indigenous science-fiction fan/writer who loves Arthur C. Clarke and Immanuel Velikovsky, and artist who paints like ‘an aborigine scientist on acid’, or so I was once told.
Is nature ‘striking back’, just doing what she has always done whether we are here or not, and/or being engineered or ‘forced’ to behave in ways she wouldn’t normally?
I’ve been very interested in and attracted to volcanos for 13 years or more, when I kind of fell in love with them in New Zealand around 2005. I had visited Aotearoa’s youngest volcano, Rangitoto, a few times and had even been invited to stay in a little ‘batch’ (cabin) there. I also made two visits to New Zealand’s only active volcano, White Island, about a 1.5 hour boat ride east from Whakatane in the Bay of Plenty.
Then in 2006 I was traveling in Chile for a few months and ended up living in a lovely town called Pucon about 6 hours south of Santiago, which is only a few kilometers from Rucapillan (its indigenous Mapuche name, her Euro name is Villarica). This was my first experience living for an extended period practically on the lower slopes of an active volcano in the world, the third most active in the world.
I’ve done the Tongariro Crossing walk on Te Iki a Maui (North Island NZ) 3 or 4 times, once when it was covered in snow, as well as camped out with my former partner Liesbet on the lower slopes of Ruapehu near Taranaki Falls.
In 1998 I spent a month visiting Maui, and went to the summit of Haleakala twice, then in 2013-14 I came here to the Big Island for 3.5 months and returned in January of this year.
I won’t go into it here, but I seem to develop a kind of spiritual or almost mystical connection with the volcanos I have been privileged to visit and spend time with or near…I actually come to love them, to kind of feel their spirit and know their feelings to a degree. I know this sounds a bit new-age airy-fairy but it’s really true. Volcanos are exquisite (a Carl Sagan word!) manifestations or expressions of both the beauty and power of Mother Earth, capable of ineffable tranquility and catastrophic upheaval.
I had already been in the process of contacting some of the top vulcanologists over the past few weeks, especially since I had gone up to Volcanos National Park and then to the Mauna Kea summit about two weeks ago, in order to learn more about this ‘isolated volcanic archipelago’ called Hawai’iki, formed from magma extruded upward from a major mantle plume then dragged slowly westward as the Pacific plates goes walkabout. 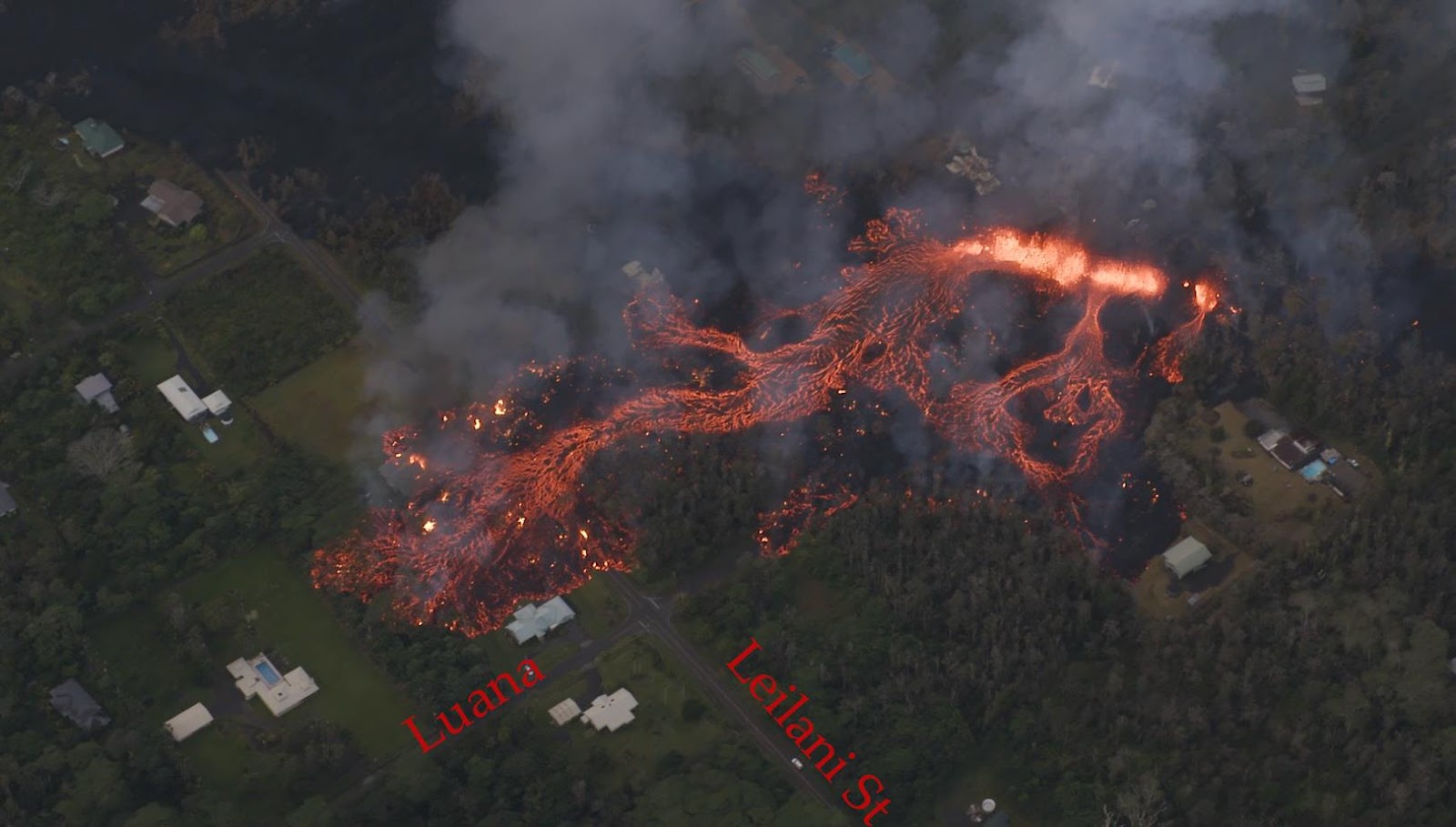 FRAME GRAB FROM MICK KALBER’S VIDEO 6 MAY (@ around 1:16) TO ME THIS LOOKS EXACTLY LIKE SOME KIND OF DRAGON’S CLAW OR ABSTRACT GODZILLA BEING!
WATCH THE VIDEO HERE:
https://vimeo.com/268313917
I’ve been trying to cover a lot of truly HUGE issues lately, for example, all the whale and dolphin strandings and exploding war that my species is waging on life in the ocean; the spate of ‘unnatural disasters’, most recently, the record-breaking and highly destructive floods on the island of Kauai; now, in the wake of disaster on Kauai, what seems to be a global volcanic and tectonic upheaval with ‘ground zero’ being the ‘Hawai’ian hot spot.’
There’s not enough hours in a day. Hopefully that won’t be changing any time soon, but these days, you never know? I will be continuing these updates even after I’m back in Australia next week, and with no less intensity of interest or concern. To be here while all this is going on is a synchronicity on the same order as being at Big Mountain when the Chernobyl meltdown occurred in 1986. Day by day I am appreciating the gravity of the situation…not to mention the viscosity and thermal gradients…as well as under-going a crash course in Hawai’ian vulcanology. I will do my best, as always, to share the coolest…or hottest in this case…and most relevant information I can glean.
RELEVANT LINKS
DUTCHSINSE VIDEOS ON GLOBAL VOLCANISM
https://www.youtube.com/watch?v=nKSNcCzLKnE
https://www.youtube.com/watch?v=vXFJ5N02zP4
MY VIDEO FROM 1 MAY, JAGGER OVERLOOK AT KILAUEA SUMMIT
https://www.youtube.com/watch?v=d06Dtl88bdo&amp;feature=youtu.be
HALEAMAUMAU TIME-LAPSE (USGS-HVO)
https://volcanoes.usgs.gov/observatories/hvo/multimedia_uploads/multimediaFile-1922.mp4

KILAUEA-IKI 1955 – OVER 900M HIGH FOUNTAIN
https://volcanoes.usgs.gov/volcanoes/kilauea/kilauea_gallery_49.html
http://www.hawaiinewsnow.com/story/38100441/geologists-say-kilauea-quakes-are-similar-to-1955-even
NATIONAL GEOGRAPHIC TSUNAMI VIDEO EXCERPT
https://www.youtube.com/watch?v=KstQogN8DUA
IF THE HILINA SLUMP FALLS IN…
THIS IS A BIT ‘HOLLYWOODIZED’…YOU’VE SEEN THIS WALL OF WATER MANY TIMES IN VARIOUS DISASTER FLICKS LIKE ‘THE ABYSS’ AND ‘DEEP IMPACT’…but in ‘The Abyss’ the tsunami was caused by the aliens, and in ‘Deep Impact’ if was from comet fragments, only in THIS scenario it is caused by 10% of the land-mass of the Big Island sloughing off into the ocean…apparently this kind of thing has happened before, and, sure, the East Rift fissures seem to be opening along a huge crack that’s right where this boundary would be…and…did the big 6.9 last week break anything loose down there? Ultimately, only time will tell but the USGS scientists are inundated with phone calls from all over the world because everyone wants to know…only Pele really knows, however…

Trumpilocks And The Three Hostages

Thu May 10 , 2018
Once upon a time, there was a wicked wizard called The Rocketman, who fired nasty rockets at his enemies. He also had lots of prisoners in his grim dungeon, and once people went into that dungeon, most of them were never seen again. Every now and then, one of these […]