ugh this “merger” has been in the works for a while, the controversy continues as the date draws closer. As the second report below shows, Bayer (no saints themselves as the graphic below indicates) are risking a tarnished reputation by associating with the notorious Monsanto. 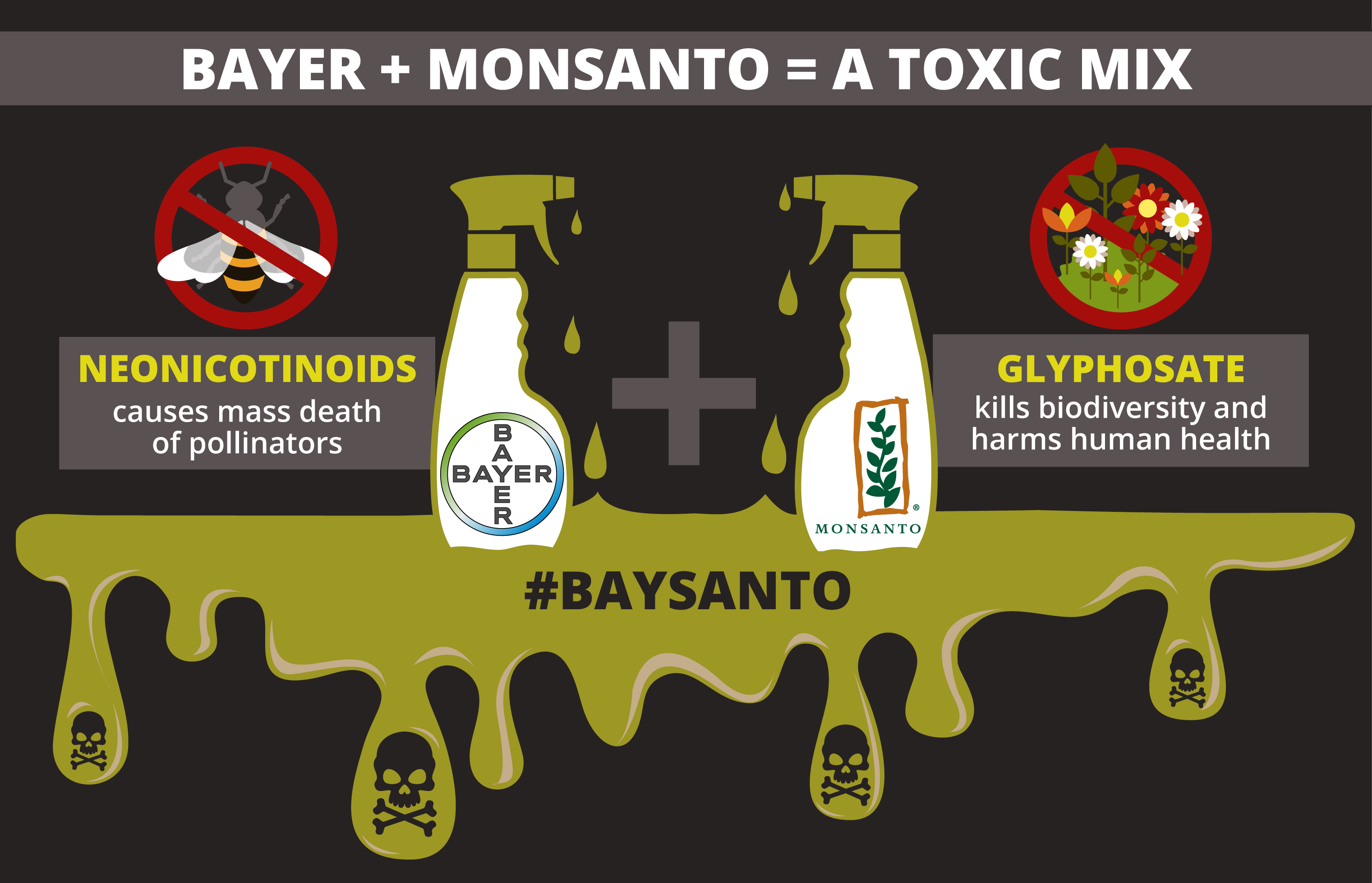 The Justice Department Is Going to Let Bayer Buy Monsanto. Here’s Why It Matters

The U.S. Justice Department has just given Bayer permission to buy Monsanto in a $62.5 billion deal.
The approval (with some conditions) was the last big hurdle for the deal, which has been in the works since May 2016. DOJ approval follows European Union approval in March and a “productive” meeting between Bayer and President Trump in January. It’s the largest all-cash buy-out on record and the largest deal ever by a German company.
But not everyone is over the moon about the tie up that will let one company control more than a quarter of the world’s seeds and pesticides.
Here’s what you need to know:
1. What’s the Deal?
In May 2016, Bayer made an unsolicited offer to buy Monsanto at $122 a share, or about $66 billion. (The deal is now valued at $62.5 billion.) Bayer is a German drug and chemical maker; Monsanto is an agricultural juggernaut based in St. Louis, Mo. Together, they represent the pinnacle of data-driven industrial agriculture, which the companies say will be necessary to feed a planet that hosts 10 billion people. Werner Baumann, the CEO of Bayer, and Hugh Grant, Chairman and CEO of Monsanto, emphasized their companies’ ability to invest more in innovation once joined, pledging to spend $16 billion on research and development worldwide over six years. However, Business Insider points out that this is only a total of $500 million more than the companies are spending on R&D right now.
2. What Did DOJ Approve?
With such a big tie-up inevitably comes anti-trust concerns. Although Bayer and Monsanto are ostensibly function in different sectors, there is some crossover between their products. To satisfy the DOJ, Bayer will sell off some of its assets to German competitor BASF before the merger. These include the company’s soybean and cottonseed businesses as well as its glufosinate weedkiller, which is a direct competitor to Roundup, a central element of Monsanto’s business.
3. Why Are Farmers So Worried?
For all Baumann and Grant’s bluster about innovation and feeding the world, many farmers worry that this merger is motivated by profit alone—which will be much easier to make after the tie-up. Mark Connelly, an agriculture analyst, told Business Insider, “These companies want to make more money, they want to raise prices. No company in this industry needs these deals in order to innovate.” Moreover, research from the Farmers Business Network shows a positive correlation between a company’s market share and its seed price. Market share is also an indicator of yield, but the gains taper off quickly. If this pattern holds, farmers could be paying a whole lot more money for not much more yield.
4. What Will It Mean for Consumers?
If farmers’ fears come to fruition, consumers could see prices go up not only on agricultural products, but also on the umpteen products that hide corn and soybean inputs such as gas. The Bayer-Monsanto deal is big enough on its own to create cause for concern. It’s even more worrying in the wake of the ChemChina-Syngenta takeover and Dow Chemical’s merger with DuPont.

…Bayer has started making practical moves towards combining its business with Monsanto’s ahead of the completed merger, which it expects will close by the end of the quarter.
Last week the German company announced the executive leadership team of the new combined crop science team with five out of the 10 positions announced coming from Monsanto.
With this merger, Bayer is taking on some of the most controversial issues in agriculture and absorbing a company that has battled an overwhelmingly negative reputation, ranking in the bottom five of the Harris Poll’s Corporate Reputation Quotient since 2014 along with Haliburton, Wells Fargo, and 2018 new addition, The Weinstein Company.
From the safety of GMO foods to the ubiquity and safety of the company’s flagship herbicide glyphosate — which is again in the news even today — to the newest tangle of lawsuits regarding anther controversial herbicide Dicamba, Bayer is wading into some very hot water.
And though some see the merger as tarnishing Bayer by association, including Bayer employees reportedly, others see it as an opportunity for Monsanto to step away from a name mired in controversy and start afresh…

Bayer-Monsanto: an infamous wedding facilitated by the ECB

When Reuters wrote back in May (2016) that in theory the ECB could buy debt issued by Bayer, which said on Monday it would finance its cash bid for Monsanto with a combination of debt and equity, we thought it would only be a theoretical case. We hoped the ECB would not dare actually do that. Unfortunately, this turned out to be a very real situation….

Monsanto has been consumed by Bayer in a massive corporate merger, creating the world’s largest chemical company. To no one’s surprise, they are dropping the name “Monsanto” entirely, possibly to get rid of the negative baggage attached to the Monsanto name.
But Bayer itself has a shady history of crimes against humanity going back to the Nazi era.

And thanks to Rose at theConTrail for the heads up!

Thu Jun 7 , 2018
With Uncensored’s current mag issue featuring controversial lunar images, this latest presentation from Tyler is right on cue. Enjoy: secureteam10 Published on Jun 6, 2018 Could it be that our moon is in fact hollow or at least riddled with hidden tunnel systems? Even a space station of sorts? What […]