Looks like the Obama facade may be chipping around the edges!

As wit all things controversial, do your own follow up research and “Think For Yourself”! 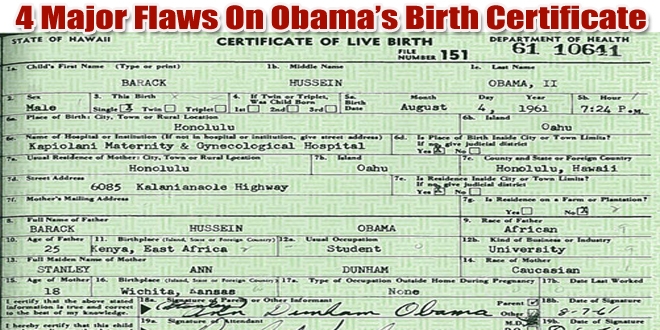 If the TRUTH ever comes out that Obama was never eligible to be president, what happens to all the laws he signed into being and all the executive orders?
Should they all be null and void?

Here are 4 Simple questions from a reputable attorney….. this should really get your “gray matter” to churning, even if you are an Obama fan.

For all you “anti-Fox News” folks, none of this information came from Fox. All of it can be verified from legitimate sources (Wikipedia, the Kapiolani hospital website itself, and a good history book, as noted herein). It is very easy for someone to check out.

1. Back in 1961 people of color were called ‘Negroes’. So how can the Obama ‘birth certificate’ state he is “African-American” when the term wasn’t even used at that time ?

2. The birth certificate that the White House released lists Obama’s birth as August 4, 1961 and Lists Barack Hussein Obama as his father. No big deal, Right? At the time of Obama’s birth, it also shows that his father is aged 25 years old, and that Obama’s father was born in “Kenya, East Africa”.

This wouldn’t seem like anything of concern, except the fact that Kenya did not even exist until 1963, two whole years after Obama’s birth, and 27 years after his father’s birth. How could Obama’s father have been born in a country that did not yet Exist?

Up and until Kenya was formed in 1963, it was known as the “British East Africa Protectorate”. (check it below)
http://en.wikipedia.org/wiki/K enya_%28http:/en.wikipedia.. org/wiki/Kenya%29

3. On the Birth Certificate released by the White House, the listed place of birth is “Kapi’olani Maternity & Gynecological Hospital”.

This cannot be, because the hospital(s) in question in 1961 were called “KauiKeolani Children’s Hospital” and “Kapi’olani Maternity Home”, respectively.

The name did not change to Kapi’olani Maternity & Gynecological Hospital until 1978, when these two hospitals merged. How can this particular name of the hospital be on a birth certificate dated 1961 if this name had not yet been applied to it until 1978?
(CHECK IT BELOW)

Why hasn’t this been discussed in the major media?

4. Perhaps a clue comes from Obama’s book on his father. He states how proud he is of his father fighting in WW II. I’m not a math genius, so I may need some help from you. Barack Obama’s “birth certificate” says his father was 25 years old in 1961 when Obama was born. That should have put his father’s date of birth approximately 1936 – if my math holds (Honest! I did that without a calculator!) Now we need a non-revised history book-one that hasn’t been altered to satisfy the author’s goals-to verify that WW II was basically between 1939 and 1945. Just how many 3 year olds fight in Wars? Even in the latest stages of WW II his father wouldn’t have been more than 9 years old. Does that mean that Mr. Obama is a liar, or simply chooses to alter the facts to satisfy his imagination or political purposes ?

“If you do not take an interest in the affairs of your government, then you are doomed to live under the rule of fools.” – Plato

One thought on “The Obama Facade: 4 Simple Questions You Can Easily Check”

Whit And Whitlam, Ronald And Donald.

Sat Jun 23 , 2018
Reagan had the same catch phrase as Trump. The variation of ‘Make America Great Again’. As Whitlam in Australia had a similar slogan to Manzies’; ‘It’s Time’. There are also similarities between Trump and Whitlam in their management styles, and desires to improve the state of their nations. After the […]