Killer robots have been a staple of TV and movies for decades, from Westworld to The Terminator series. But in the real world, killer robots are officially known as “autonomous weapons.”

Heard on All Things Considered

By Ari Shapiro
At the Pentagon, Paul Scharre helped create the U.S. policy for such weapons. In his new book, Army of None: Autonomous Weapons and the Future of War, Scharre discusses the state of these weapons today. 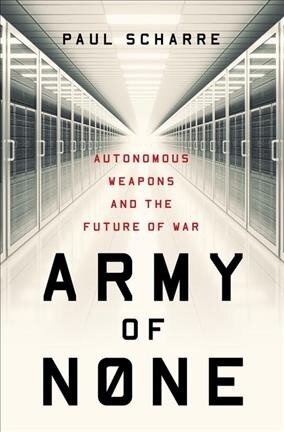 “Killer robots” might be a bit sensational, he says, but what he’s talking about is a weapon that could “go out on its own and make its own decisions about who to kill on the battlefield.”
At least 30 countries have autonomous weapons that are supervised by humans for defensive purposes, Scharre says.
“[These are] things that would target incoming missiles and shoot them down entirely on their own,” he says. “Humans are sitting there at the console that could turn it off if they need to. But in a simple way, those are autonomous weapons.”
Scharre says while the current weapons are not like those seen in the movies, the technology is advancing, whether people like it or not.

“Things like more advanced hobby drones, the same technology that will go into self-driving cars, all of those sensors and intelligence will make autonomous weapons also possible,” he says.
In his book, Scharre looks at the question: “How hard would it be for someone to build a simple, autonomous weapon in their garage?”
And while that’s a scary scenario, he says that it’s already happening on some levels as students today are learning programming skills, with free and readily available online resources.

“These tools are available for free download. You can download them online,” he says. “[It] took me about three minutes online to find all of the free tools you would need to download this technology and make it happen.”
And while high school students aren’t creating these autonomous weapons, the ability to do so is a real possibility. Because of that, Scharre says the debate isn’t so much about if this type of technology should be created, but more so what should be done about it.
“What do we do with this? Do we build weaponized versions of them? Do you build them en masse? Do militaries invest in this?” are all questions being asked as this technology would drastically change warfare.
“[It would create] a domain of warfare where humans have less control over what happens on the battlefield — where humans are no longer deciding who lives and who dies, and machines are making those decisions,” Scharre says.
Debates like this are happening in countries all around the world, including those that have repeatedly violated international rules.
In Russia, the military is working to create a fleet of armed ground robots.
“They’re building large, ground combat vehicles that have anti-tank missiles on them,” Scharre says. “Russian generals have talked about a vision in the future of fully robotized units that are independently conducting operations, so other countries are leaning hard into this technology.”
Scharre says that one of the fears of this technology advancing is that “flash wars” could occur at such as fast pace that humans would not be involved…

Humans could land on Mars DECADES AGO, Nasa astronaut reveals scientists HAVE TECHNOLOGY

Fri Jul 20 , 2018
…Yeah, but we’d be dead on arrival according to this report! (Anyone wanting to know an alternative plan to get to Mars faster than conventional rocket power decades ago should look up Project NERVA.) A FORMER astronaut who spent 166 days in space said NASA had the technology to travel […]