What are all these sensational Martian revelations all about?

I remember that Martian meteorite a few years ago. The one with the “microfossils” embedded in it. It was found in Antarctica, and regardless of what the truth about this controversial rock may have been, I personally thought it seemed like a bit of convenient propaganda and PR, both to raise public interest in funding Mars missions, and awareness of Antarctica. 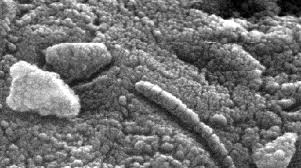 Living in Christchurch and having taken an interest in goings on at the Harewood Antarctic “Gateway” base, I’m aware that Italy is a major player in the Mars agenda, and spend plenty of time in the Antarctic wilderness, as well as Greenland in the North, which is also perceived to have a Mars-like environment. Suspiciously Mars-like actually. There’s even a “clone” Mars Rover crawling around there for these guys to practise with. Inevitably, it has been claimed that NASA and co. are kidding us: All those pretty pics of Mars are actually Greenland or Antarctica through a red tinted lens. I never paid much attention to this claim until I saw a “Martian landscape” in which one of the rocks looked suspiciously like an Arctic Lemming! Now we have a new sensational revelation about the discovery of buried water on Mars. Now that’s no surprise to me, as I think Mars probably had seas and rivers and life at some stage in the past. But as watched the TV news report on this, the Talking Head said something that made me raise an eyebrow in Spock-like manner: “…Just like in Greenland and Antarctica…”. And who made this discovery? The Italians of course.

My mind is filled with all sorts of speculations regarding what’s being hidden at Antarctica. Are the Elite so obsessed because they have a training ground there for when they escape to Mars? Is Antarctica (and Greenland) a “studio set” for a fake Mars expedition?

Clearly there’s something we aren’t being told.

Sat Jul 28 , 2018
Data collection is rampant, and not always in ways one is aware of. All part of the globalist “total control” plan. Not just Social Media and your supermarket shopping, but now your medical data; your genetic data even, is up for sale to Big Pharma, as David Icke elaborates: https://youtu.be/VjFIFOavoTU […]