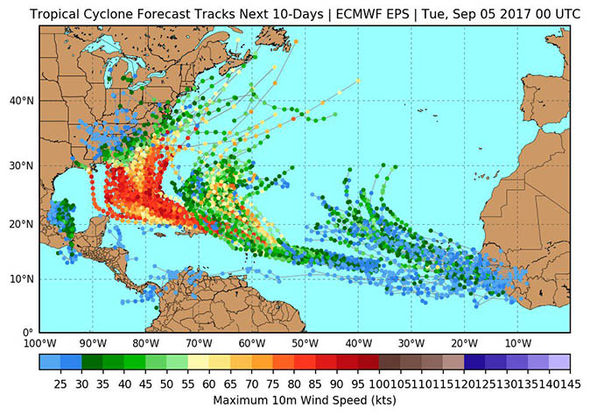 Here are the latest developments:
• As of 5 p.m. Tuesday, the center of the storm was in the Atlantic Ocean about 785 miles from Cape Fear, N.C. Follow the hurricane’s path here.
• The storm’s maximum sustained winds were back up to 140 miles an hour after easing slightly in the morning. The National Hurricane Center said the storm would remain an extremely powerful and dangerous storm at least through landfall.

• A hurricane warning has been issued for the coast from South Santee River, S.C., to Duck, N.C., and for Albemarle and Pamlico sounds. Storm surge warnings are posted for the same area plus the Neuse and Pamlico rivers. A tropical storm watch covers the coast to the north as far as Cape Charles Light, Va., and for the Chesapeake Bay south of New Point Comfort.
• President Trump said on Tuesday that “we are ready as anybody has ever been” for a hurricane. He also called the widely criticized federal response to Hurricane Maria in Puerto Rico last year an “incredible unsung success.” Read more here about the president’s remarks.

• Mandatory evacuations have been ordered for most coastal counties of South Carolina and in parts of North Carolina. Schools and government offices in coastal counties of both states have been ordered closed.
• U.S. 501, the highway that runs from Myrtle Beach to Virginia, carried four to six times as much traffic as normal on Tuesday, according to the South Carolina Highway Patrol. Interstate 26, which runs from Charleston to the western part of the state, had three times as much traffic as normal.

• Evacuations began at 8 a.m. Tuesday in coastal areas of Virginia, including large parts of the Norfolk and Virginia Beach area. In Maryland, a state of emergency was declared to mobilize resources ahead of the storm. Mayor Muriel Bowser of Washington, D.C., also declared a state of emergency, with torrential rain a threat there.

Check progress of the storm and other weather events:

Fri Sep 14 , 2018
Hurricane modification is real. Is it just a coincidence or is there a connection between electrical weather modification and this storm’s track? You be the judge. By Jim Lee • Subscribe on YouTube Thursday, Sep 13, 2018 Track Hurricane Florence and see the NEXRAD Radars, Nuclear Power Plants, and River […]